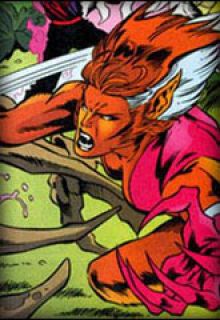 The mutant known as Feral grew up in a New York City tenement as Maria Callasantos. She had an older sister, Maria, who would also prove to be a mutant, a younger brother, Matteo, and a younger sister, Carolina. Their father beat his wife and abandoned the family after the birth of Carolina, the youngest of the children. He was eventually found dead from a drug overdose. Maria blamed her two younger siblings for the fact that their father deserted them. Carolina later fell down a staircase to her death while Maria was babysitting her; it is unclear whether Carolina's death was an accident or whether Maria killed her. Later, Matteo was chasing Maria's pet pigeons on the tenement roof when he allegedly tripped over the ledge. He held onto the ledge as long as he could, but soon fell to his death. Maria was a witness, and, again, it is unclear if she had killed him. Maria's mother had a boyfriend named Harry Bellinger, who was an alcoholic and a cocaine addict who got Mrs. Callosantos addicted to drugs as well. Lucia's mutations began to emerge, much more slowly than Maria's, and caused her to start growing fur. When Lucia was seventeen, Bellinger tried to rape her. But Maria, now fifteen, whose mutations had emerged much more quickly, stopped Bellinger and killed him. Together Maria and Lucia hid the body. Knowing that Maria had murdered Bellinger, Mrs. Callasantos killed Maria's pet pigeons in revenge. Seized by hatred, Maria then killed her mother. Maria and Lucia went to live among the underground community of mutants known as the Morlocks. The two sisters came to resemble humanoid animals; Maria took the name 'Feral,' and Lucia became known as Thornn. Eventually, Feral joined the team of mutant adventurers that became known as X-Force; none of her teammates knew about her past. Thornn, on the other hand, fell in with the Brotherhood of Evil Mutants that was organized by the Toad. For a time Feral served well in X-Force. But then the team attempted to rescue government official Henry Peter Gyrich from the terrorist Mutant Liberation Front, led by Reignfire. Feral hated Gyrich, who was no friend to mutants, and Reignfire persuaded her to join the Mutant Liberation Front and to kill Gyrich. When Feral attacked Gyrich, X-Force's leader Cable shot her with a non-lethal charge, but then Reignfire abducted her. Feral emerged from hiding when the New York City police captured Thornn. Feral confronted Thornn and X-Force member Cannonball. Thornn revealed that she had seen Feral kill Harry Bellinger, and Cannonball provoked Feral into admitting that she had murdered her mother. Cannonball overpowered Feral, and an old friend of Lucia's, police detective Jose Hidalgo, arrested her for killing three members of her family and Bellinger. Thornn went free, but Feral is now presumably serving a prison sentence for murder.