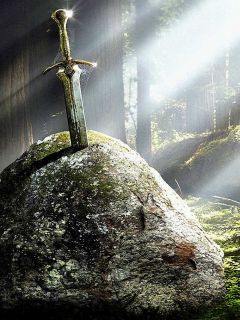 Excalibur (/ɛkˈskælɪbər/) is the legendary sword of King Arthur, sometimes also attributed with magical powers or associated with the rightful sovereignty of Britain. Excalibur and the Sword in the Stone (the proof of Arthur's lineage) are sometimes said to be the same weapon, but in most versions they are considered separate. Excalibur was associated with the Arthurian legend very early on. In Welsh, it is called Caledfwlch; in Cornish, Calesvol (in Modern Cornish: Kalesvolgh); in Breton, Kaledvoulc'h; and in Latin, Caliburnus.