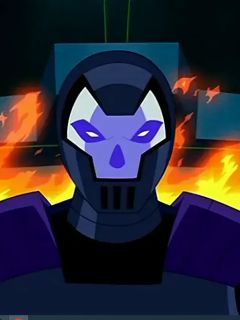 At some point after the events of Ben 10 in another timeline, when Ben goes back to school, Eon fought the Omnitrix wielder with the intention of enslaving and using him to activate the Hands of Armageddon. Eon temporarily succeeded in doing so, as Ben activated the Hands of Armageddon. However, Ben's personality retook control when Gwen managed to reach Ben inside young Eon; Ben then changed back to human, while Max deactivated the Hands. Enraged, Eon tried to exact his revenge, but Ben as Wildmutt managed to send Eon crashing into the Hands of Armageddon, destroying it in a huge explosion of bright, glowing purple-colored energy, and inadvertently sending Eon out of that timeline.

In Ben 10,000 Returns, it is revealed that Eon had been travelling through various different timelines, enslaving different versions of Ben wherever he found them, with the intention of becoming the one and only Ben in the entire spacetime continuum. When he came to a possible future set 20 years from Ultimate Alien, Eon broke into Ben 10,000's headquarters where he and his servants fought the adult Ben Tennyson. Ben 10,000 used Clockwork's abilities to send Eon 20 years earlier, to present day Ben, unaware that Eon needed that to happen in order to complete his plan.

Eon created a trap by using the Prime Timeline's Hands of Armageddon stored in a Bellwood museum to emit a signal that the Ultimatrix would pick up. When Ben touched the Hands of Armageddon, the artifact sent a pulse into the device, allowing Eon's servants to travel through and fight Ben, Gwen, and Kevin. After Eonâ??s servants were defeated, they were sent back once again.

After the Hands of Armageddon were strapped inside the Rust Bucket 3, Eonâ??s servants once again fought the team. The servants managed to damage the Rust Bucket 3, forcing the ship to plummet down to the surface. When Ben as Way Big and Ultimate Ben as Clockwork attempted to destroy the Hands of Armageddon, they unintentionally allowed Eon and his servants to break out. Eon used his time rays to age Way Big to dust, seemingly killing Ben; however, Eon merely destroyed the transformation and not Ben himself.

A battle erupted between Eon's forces and Ben's team. After swiping Ben 10,000 off to the side, Eon shoots his beams of energy towards Ultimate Swampfire, but only manages to age the seedlings that he planted before vanishing. This leaves Eon confused, allowing Ultimate Swampfire to grab Eon, demanding an explanation for his actions. Eon says that their paths are intertwined in every timeline. Eon managed to get the upper hand by throwing Ultimate Swampfire to the ground and aging both the transformation and his regular counterpart, leaving Ben vulnerable. Before Eon could finish Ben off, he was saved by Ultimate Ben, who protected himself from Eon's beams by forming a mana shield in front of him and escapes along with Ben.

After the gang discovers that Eon's servants are actually alternate Bens when Gwen immobilizes them, Eon explained his plan to absorb both Ben and Ben 10,000 so he can replace the current timeline with a new one. Taking his helmet off, he revealed his identity as an alternate Ben 10,000 and was confronted by Professor Paradox. Eon tells the time walker that he cannot interfere, yet Paradox understood this and says that if Eon were to proceed with his plans, he will have no place to hide. Ben discovered that Eon never came through the Hands of Armageddon, but rather through their respective Ultimatrixes, and that through the whole fight Eon was luring all of them away from the artifact. Eon attempts to age Ben to dust once again, but Ben manages to transform into Jetray and flies towards the Hands of Armageddon. Gwen, Kevin, and Ben 10,000 fight off Eon while Jetray destroys the Hands of Armageddon, causing Eon to explode. Paradox stated that all the Bens Eon had controlled would go back to their own timelines and return to normal.

Eon returned in Ben Again, somehow brought back to life, but ended up trapped in the main timeline by Paradox. Seeking to get hold of the time-walker's Chrono Navigator in order to have the freedom to traverse the multiverse once more, Eon went after Ben both when he was 11 and when he is 16 at the same time. During the battle in two time zones, Eon touched both Bens' Omnitrixes, causing the immature 11-year-old Ben to switch minds with his more mature 16-year-old self. Realizing Paradox wouldn't show up in the present day because the 11-year-old mind of Ben doesn't know him, Eon quickly went to 11-year-old Ben's time zone, where he ambushed Paradox and cut off his robotic right hand.

Eon held Paradox captive in another dimension for interrogation and, knowing that Paradox never lies, figured out that his missing cybernetic hand was his Chrono Navigator. Originally planning to go back to the moment it was severed, Eon was warned against doing so by Paradox as it risked throwing him out of existence due to the fabric of reality being stretched thin by both of their presences and the switched minds of Ben.

Eon instead went to the present day, where he stole the Chrono Navigator from the immature Ben once he found it. Eon used the Chrono Navigator to summon his minions, but Eon's abuse of the device's power began to seriously stretch and damage the fabric of time. As both the present and 11-year-old Ben's time were now visible through the distortions Eon had created, Eon was blasted out of the timeline by the 11-year-old and 16-year-old Bens' versions of Clockwork, restoring reality to normal and erasing all the events he had just caused to occur.

In And Then There Were None, Eon joined forces with Vilgax to, as Eon believed, create an army of evil Omnitrix-wielders under Vilgax's control, which Eon achieved through gathering an army of evil Ben Tennysons from all across the multiverse and destroying those among the alternate Bens who refused to join. After Vilgax and Eon had five evil versions of Ben- Albedo, Bad Ben, Mad Ben, Benzarro, and Nega Ben- under their control, they went to the No Watch Timeline, with Eon and the evil Bens intending to destroy No Watch Ben since his reality's lack of an Omnitrix made it an unpredictable temporal wildcard. However, while Eon and the evil Bens were fighting against a team of good Omnitrix-wielders gathered by Professor Paradox to counter them, Vilgax betrayed Eon. Using a Chronosapien Time Bomb, Vilgax wiped all the other timelines, and their Bens with them, from spacetime, Eon included.

In And Then There Was Ben, Eon was seen in the recent past in Dimension 23, back when he was still recruiting alternate Bens for his and Vilgax's army. Eon was fighting Ben 23 for refusing to join, but with Gwen 10 and present No Watch Ben's unseen help, Ben 23 defeated Eon and forced him to flee to another dimension in search of more persuadable Bens. After Vilgax had successfully deployed the Chronosapien Time Bomb back in the present, Eon was brought back into existence when No Watch Ben used Clockwork to suck the Time Bomb's ripple back in. He attacked Vilgax and tried to finish him off for backstabbing him, but before he could have done it, Fourmungousaur swatted him away. At the end of the episode, he was sent back to his own timeline by Clockwork.

In Let's Do the Time War Again, Eon was sent by Maltruant to collect the eggs of a Time Beast to aid him in the Time War. Eon met up with Exo-Skull and Subdora to get the eggs but ran into difficulty with Ben and Rook Blonko's interference. Even more, Paradox and Ben 10,000 appeared to help stop Eon as well. Eon eventually released a Time Beast and Ben and Rook are forced to try and stop it. Eon mainly fought with Paradox and summoned his minions to fight Ben 10,000. Eon then managed to escape with two Time Beast eggs and deliver them to Maltruant.

In The End of an Era, Eon was summoned to Ben 10,000's timeline by Maltruant, bringing with him a Time Beast-pulled chariot. Maltruant pushed Eon off the chariot, telling him that his services were no longer required. Eon was angered, saying they had a deal. Maltruant responded by nonchalantly sending Eon back to his own timeline.
Superhero Class