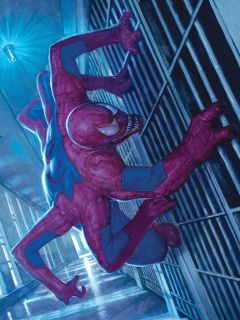 The Doppelganger began life as a living fractal, a geometric pattern in the Dimension of Manifestations, able to assume the forms and attributes of any being, real or abstract. When the mysterious Magus set out to obtain the vast power of the Infinity Gauntlet, he contracted the ruling fractal, Prime Manifester Anthropomorpho, to transform several young fractals into monstrous versions of Earth's super heroes; the Doppelganger was one such creation, based upon Spider-Man. It and its brethren were sent to Earth to attack the heroes in the so-called Infinity War. The Doppelganger interrupted a fight between Spider-Man and the Hobgoblin, who impaled the creature upon a fence.

The disoriented Doppelganger wandered New York for days before being attacked by the psychotic Carnage, who mistook the creature for their mutual enemy Spider-Man; however, Carnage's companion, the equally insane Shriek, took a liking to the Doppelganger, and the deranged couple introduced their new "son" to the "pleasure" of random murder. During their spree, the three were joined by Demogoblin and Carrion (Malcolm McBride); they also fought Spider-Man, the Black Cat, Cloak and Dagger, Venom, Morbius, and others. The Doppelganger became devoted to Shriek; when Carnage attacked her for rebellious behavior, it sprang to her defense, but Carnage gutted it and kicked it to the street several stories below. Carnage and the others were defeated shortly afterward, but whether the Doppelganger was truly slain remains to be seen.