We need one of the big guns like SoulCollector or SirSpidey to end this guy. He.....He is beyond fanboyistic. SirSpidey I need you to beat him in Cosmic Superman vs Rune Thor. He said he'll destroy you in a debate

53.6K
No He's Not I Mean He thinks Martian Manhunter can beat Thanos

Who's this Splash?
show 2 replies

14.3K
@LordTracer do you have any proof that @Kluba doesn't read comics?

34.5K
Well, for one, he thinks Binary stomps Gladiator, even though... 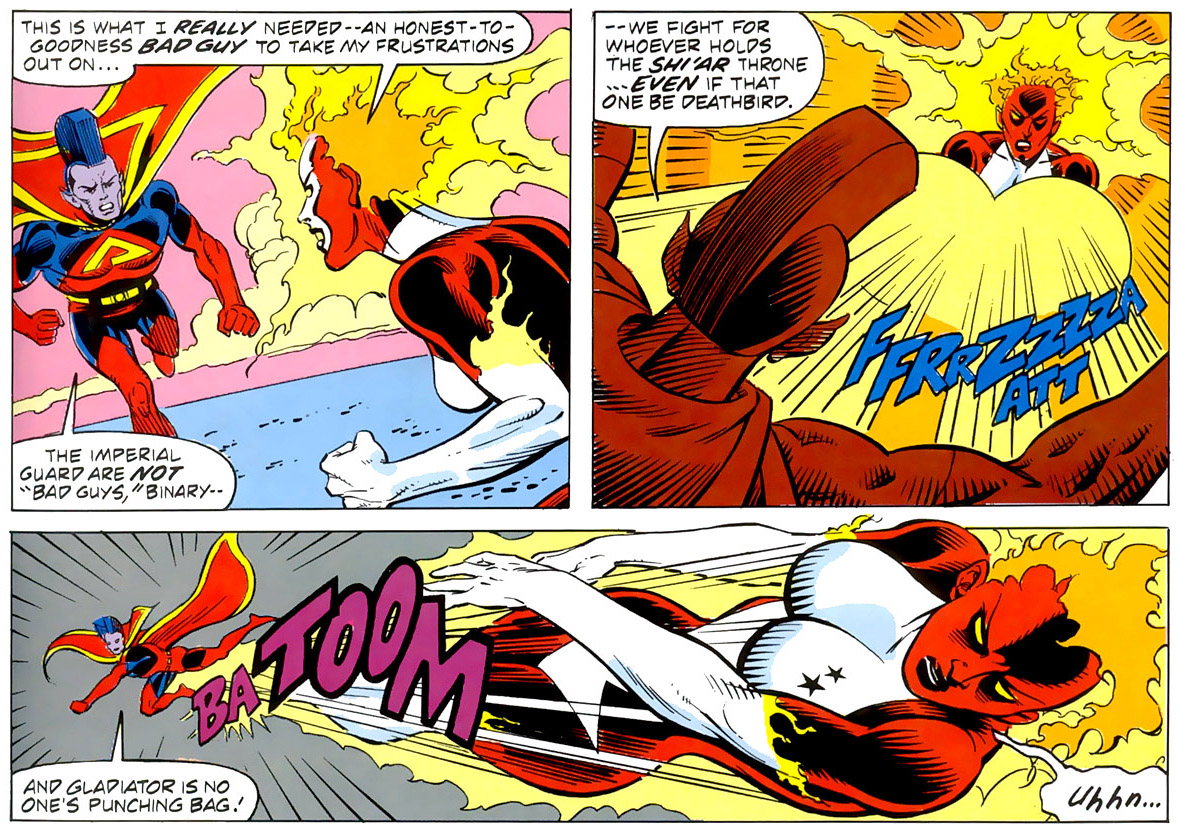 34.5K
A lot of battles, where he keeps thinking Gladiator is fodder despite being on par with Thor... thinking Orion solos this: https://www.superherodb.com/team-orion-vs-team-hercules/90-381769/... thinking Darkseid is an eleventh-dimensional being and somehow thinking that makes him on par with the Living Tribunal, as said here: https://www.superherodb.com/michael-demiurgos-lucifer-morningstar-vs-living-tribunal-beyonder/90-349975/

14.3K
I'll give you that, he was MUCH more intelligent as @ArthurCurry89

779
Splash u mean this guy on youtube who thinks Hawkeye can beat Spiderman ?
show 1 reply

18K
He thinks lobo is outerversal

352
Well everyone, I debated him. Let me know who y'all think won, he wasn't bad, definitely stubborn, and tried to accuse me of starting a argument yet he cused at me first (5 times in total) he tried to convince me with money to VC, and of getting me a mic just to VC, I had none of that ****, so it's an agree to disagree, he's not as bad as y'all said.
show 1 reply

28.5K
Hey @AndreasVer! You didn't totally mess up. Just switch Chaos King and Mr. Mxy and you'll get a thumbs up!

I used to make his thumbnails, I can bring him to the site
show 4 replies

352
No, apparently nobody wnats him here, we have enough non sensible fan boys as is

94.3K
He did not accepteren my invite

28.5K
Oh god. If he comes on here, SHBD will die. In order to stop him, we REALLY do need @Spidey or @Soul. Anyways, don't debate Cosmic Armor Superman VS Rune King Thor. Don't. That is...bad. However, @SirSpidey, I said RK Thor solos the Justice League and he said Martian Manhunter alone can beat him. That is something you should debate because the winner is so frickin obvious.
show 4 replies

352
If he won't come to us. Then find a way to get us to go to him, his YouTube, page Discord, whatever, but I need to see what I'm up against, if it's even worth mine or @SirSpidey's time

Hmm several things about that video, that I just kind of want to say I guess

1. he doesn't give a single scan for anything he says (I don't doubt he has it, but honestly he's probably forgetting context, outliers, etc.)

2. He doesn't give any reasons why it's above Thor (like giving Thor's limits)

3. He claims he spends a lot of effort/time editing (I think more than DanCo is what he said), even though he only had 1 still image the entire time, with a movie maker intro (At least Danco can change the image to what he's talking about). It's not in the video, but I remember him saying it on Discord or something.

4. Platonic Concepts are only above 4D, highballed https://owlcation.com/humanities/An-Introduction-to-Platos-Theory-of-Forms and idk where he gets the idea that they are platonic concepts.

6. Aside from the things I mentioned above, he actually doesn't seem as bad as I've heard

352
Yeah, he seems like a basic run of the mill fan boy, not a big deal, and Thor isn't my strong suit so I'll let Spidey take that one. That platonic stuff is a bit ridiculous, like really ridiculous, but I feel he's the kind of person that you hate more because of their fan boys than themselves.

@ManofPower: Bring him to the site and we can debate officially
show 5 replies

352
Sirspidey returns! *the ruler's back by: Jay Z starts playing*

352
Yeah, all the bad jokes and arguments aside, we need you, you make SHDb what it is, I'm npt being sarcastic I'm serious, you are what makes us special and give us life, real talk

Hold on @soulcollector34. I am finally responding to our debate.

7K
@SirSpidey: If only you saw what I can see, you'll understand why we want you desperately. Right now, I'm looking at you and I can't believe you don't know you're beautiful.

352
I keep hearing about this "Splash" guy who is it? If it's a Discord guy why hasn't @Nemian destroyed him yet?
show 16 replies

34.5K
He's a YouTuber (who's also on Discord) who says things that many people here disagree with.

14.3K
Tell him to come to the site and debate me

352
Could I have a link to one of his videos, I need to know what it is I'm getting into, if it's even worth my time

Ditto for that request (I want to see a video that's actually kind of ridiculous, like the Omniversal MM, or something)

18K
@DarkWimp no, were not inviting splash to the site the site is peaceful without him

14.3K
Everyone deserves a chance

94.3K
I already invites him

14.3K
I was looking forward to debating him

352
Still waiting on that link, lol

352
Legend has it, @SoulCollecter34 is still waiting for that YouTube link

28.5K
@soulcollecter34. Nemian refused to debate him, and for good reason. Not that Splash annoyed him, but the members of the Splash cult got on everyone's nerves.

11.4K
School is that reason, and the workload, and the stress that comes with it, also I'm working on two simultaneous albums, I've written 37/40 tracks

18K
He's on discord not on this site

7K
You don't need to destroy him, just debate him normally. And ew... RKT vs CAS would end in just idiotic hyperboles stated by either Spidey or Splash. It would be a never ending thing.
show 1 reply