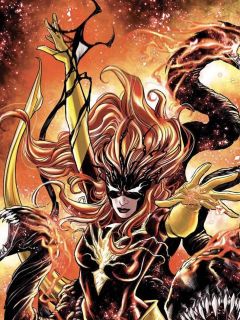 Jean Grey has been stated to be an Omega Level Mutant. By birth, Jean is a powerful telepathic and telekinetic mutant. She is also the favored avatar of the Phoenix Force, and while acting as its avatar she is one of the most powerful Cosmic entities in the Earth-616 universe.

Initially, Jean's powers were simply restricted to telekinesis and even lifting her own weight quickly tired her. With training, her telekinesis improved, but it wasn't until after she was released from the stasis chamber she was placed in by the Phoenix Force that her telekinesis really started to become powerful.

Jean's telepathy was suppressed at a young age by Charles Xavier after she connected with her dying friend, Annie Richardson. Later, Xavier released these mental blocks for a more mature Jean. She again lost telepathy following her release from the Phoenix egg, only to regain it after battling Psynapse with X-Factor. By herself, she is a strong telepath but notably weaker than the likes of Charles Xavier or the Shadow King.

She can manipulate the minds of others and even higher order animals. The range at which she can perform these feats is greatly increased while she is accessing the Phoenix Force. She has demonstrated the following specialized uses:

She can manifest her telepathy in a number of defensive ways.

She can mask her presence and the use of her abilities from being detected by other psions and psychic entities. She can extend these defenses to others around her as well. Cloaking via telepathy is not perfect and powerful psis may notice and 'see' through this ability.

Ability to rearrange the "mental engrams" of mutants so their distinctive mutant thought patterns cannot be detected by Cerebro-type devises or by other telepaths.

Ability to erect a psychic shield for protection of herself and of others minds.

She can create realistic telepathic illusions and cause people to experience events which are not actually occurring.

She can manipulate other people's minds easily, achieving a variety of effects.

She can control the thoughts and actions of others.

She can possess the mind of another, and use that being's body as her own.

She can alter the minds of others by force of will, permanently changing their personality partially or entirely.

She can induce temporary mental or physical paralysis.

She can erase any awareness of particular memories or cause total amnesia.

She can transfer both her mind and powers into other host bodies if her own physical body could be somehow killed.

The ability to erase a person's memories and to heal mental trauma through psychic surgery, the power to stimulate or deaden the pain and pleasure centers in a person's brain.

Can telepathically "sedate" her victims so that, if already rendered unconscious, they remain so for as long as she continues to "sedate" them.

She can increase the speed of neural signals in the brain, she could increase another mutant's powers to incredible levels, but the effect was only temporary.

Ability to place "psychic inhibitors" in the minds of mutant adversaries to prevent them from using their powers.

Ability to develop a mental link with any person which remains as a connection to that individual.

She can project psionic force bolts which have no physical effects but which can affect a victim's mind so as to cause the victim pain or unconsciousness and turning someone brain-dead.

She can project her astral form from her body onto the Astral Plane or the physical plane. In the physical plane, she can travel in astral form over vast distances. In the astral plane, she can mentally create psionic objects and manipulate the aspects of her environment. She can communicate with others astrally through her own will, or through contact with the thoughts and memories of others.

She can sense the presence of another superhuman mutant within a small but as yet undefined radius of himself by perceiving the distinctive mental radiations emitted by such a being.

She can manifest her telepathy as a psionic firebird; whose claws could inflict both physical and mental damage.

Jean's telekinetic abilities enable her to levitate herself or other objects, propel or manipulate them however she wishes, stimulate individual molecules to create heat, and generate concussive force or protective shields.

Jean Grey usually protects herself with others a personal force field. As well as powerful shields and energy blast.

While she has access to the Phoenix Force, she is able to manipulate matter and energy on a sub-atomic scale using her telekinesis. She can even change her Phoenix clothes into a set of street clothes and lift multiple heavy objects at once without having any difficulties.

As the favored avatar of the Phoenix Force, Jean may greatly increase her powers by tapping into the life energies of those yet unborn. The Phoenix Force also allows its avatars to manifest additional powers.

Jean, while acting as a Phoenix Force avatar, can create 'cosmic' flames under any conditions even the impossible ones such as vacuum space or underwater. These flames do not require oxygen to burn and burn so intensely that matter is consumed without by-products such as ash. Jean has perfect control over these flames, and they only consume what she wills. Typically they manifest as a raptor or part of a raptor such as a claw or wings. It is unclear whether these flames are an extension of her powerful telekinesis or a more general property of the Phoenix Force, or it is possible that she can create her very powerful 'cosmic' flames by the combination of both her extended telekinesis power and Phoenix Force as the result of her status as the one true Phoenix. It is certainly true that the cosmic flames are literal punctuation to the Phoenix's purpose to 'burn away what doesn't work.'

The Phoenix Force can resurrect others after they have died. It is unknown if factors such as time since death have an effect on the ability to successfully resurrect a person, nor is it clear how the Phoenix calls back the soul of a person to their body.

Jean and the Phoenix Force are a one-and-the-same entity at some fundamental level, and as such Jean can never truly die. Upon the death of her corporeal form, Jean spends time in The White Hot Room doing 'Phoenix work'. The Phoenix Force can also restore Jean's body to life, although there appears to be some unknown limitation to how quickly it can successfully accomplish this following her death.

While acting as the Phoenix Force, Jean can manipulate the past across large temporal distances and with a profound knowledge of the causal effect her actions will have. It may be the case that time as a concept doesn't apply to the White Hot Room.

While on Ulgriath, Jean bonded to a symbiote that escaped from Haze Mancer's collection. While bonded to it she sported a third eye on her forehead and could fire projectiles of symbiote biomass covered in psionic energy. Unfortunately, this symbiote died alongside its host when they were consumed by a Poison.
Superhero Class