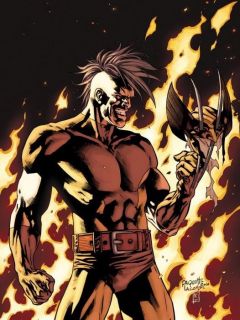 Akihiro was the son of Wolverine and his Japanese wife, Itsu. In 1946, Itsu, while in the last stages of her pregnancy, was murdered by the Winter Soldier in an attempt to draw Wolverine out and return him to the custody of Madripoor. After Itsu's death, Romulus, wearing a trench coat to conceal his identity, took the baby, cutting him from his mother's womb and leaving her body behind. The baby survived the horrible incident due to his mutant healing factor, which he inherited from his father.

Romulus left the baby on the doorstep of Akihira and Natsumi, a wealthy, young and traditional Japanese couple. They took the child's arrival as an answer to their prayers and raised him as their own. Though he was named Akihiro by his father, the servants and other families of Miyagi Prefecture secretly referred to the boy as Daken (é§?ç?¬, "bastard dog"), a slur on his obvious mixed heritage. As Akihiro grew up, he was often teased by the other boys of Sendai. His harsh treatment over the years caused Akihiro to develop a very cold persona to all except his father.

One night, Natsumi confessed to Akihira that she didn't love their adopted son and that, after long years of trying, she was pregnant. Akihiro overheard this and began plotting. Within a year, sometime in 1957 after the birth of the baby, Junichiro, Akihiro confronted his mother, telling her that he had killed her son. Akihira was furious and disowned Akihiro, who furiously responded that "Akihiro" was not his true name. Natsumi suddenly appeared, trying to run Daken through with a rifle's bayonet, triggering the onset of Daken's mutant powers. With a wave of his arm, he accidentally slashed Natsumi with the bone claws that had sprung from his hands. Unable to force himself to harm his son, Akihira instead committed suicide with the discarded rifle. Romulus then appeared to the boy for the first time, telling Daken that he was what the boy would someday become.

Romulus sent Daken to a training camp in Canada, the same camp where Wolverine had first trained more than forty years earlier. Daken was also trained by the same man as his father - Silas Burr - who would later become the mercenary known as Cyber. Burr trained Daken for more than two years before Daken went missing one day. While two search parties were sent out, Daken, at the behest of Romulus, reappeared in the camp and killed every man before confronting Burr. During their fight, Daken displayed what Romulus described as an ability to alter a person's emotional state.

Daken used this ability to put Burr in a very good mood, confusing him and allowing Daken to draw first blood with his claws. Burr, however, quickly recovered and Daken soon found himself on the ground. With his revolver aimed at the prone Daken, Burr prepared to kill his student. Daken, however, suddenly appeared behind Burr with the revolver and emptied it into Burr. As Daken then prepared to kill his trainer, Romulus appeared and stopped him, telling Daken that he had plans for Burr, before asking Burr if he had ever heard of Adamantium.

Years later, Romulus revealed to Daken that his father was still alive, but lied at the same time, telling Daken that it was Wolverine who had killed Itsu with Daken still inside her. Romulus told Daken that Wolverine feared what Daken would become. This lie sowed a seed of vengeance in Daken that Romulus continued to feed in the following decades.
Superhero Class