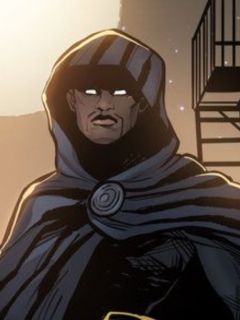 Raised in a poor South Boston neighborhood, Tyrone Johnson was a good student despite his chronic stutter, a disability he struggled to master with the support of his best friend, Billy. When Tyrone was 17, he and Billy witnessed the robbery of a local store and the fatal shooting of its clerk. The thieves fled, and Billy ran as well, fearing that he and Tyrone might be wrongly suspected of the crime. When a policeman ordered Billy to stop, Tyrone tried to proclaim Billy's innocence; but his stuttering made it impossible to speak clearly, and the officer shot Billy dead. Feeling responsible for Billy's death and afraid of the police, Johnson ran away to New York City.

Arriving at Manhattan's Port Authority Bus Terminal, a penniless Tyrone considered robbing Tandy Bowen, a rich girl who had also run away from home; yet when someone else robbed her first, Tyrone impulsively tackled the thief and returned Tandy's purse. The two teens became fast friends. When the naďve Tandy accepted an offer of shelter from some strange men, a wary Tyrone went along to protect her; however, the two teens were soon forcibly delivered to criminal chemist Simon Marshall.

Marshall was developing a new synthetic heroin for the Maggia, testing it on runaway teens with fatal results. Johnson and Bowen somehow survived injections of the drug, and they fled. During their escape, Tyrone found himself engulfed in darkness and seized by a strange hunger which eased in the presence of Tandy, who was glowing with a brilliant light. Trying to hide his newly shadowy appearance in a makeshift cloak, Tyrone began absorbing Marshall's thugs into his darkness while Tandy struck them down with daggers of light. The two teens dubbed themselves Cloak and Dagger and declared war on drug crime.

Cloak and Dagger started out as merciless vigilantes, killing Marshall despite the interference of Spider-Man, who saw the duo as misguided innocents and gradually became their friend. After ill-fated assassination attempts on the crimelords Silvermane and Kingpin, Dagger became less ruthless and tried to steer Cloak in a similar direction; however, since his power compelled him to consume living beings, Cloak found it more difficult to follow this gentler path, even though Dagger's light could satisfy his hunger temporarily.

Cloak and Dagger befriended the super-powered preteens Power Pack and twice aided the New Mutants, junior trainees of the X-Men. The duo eventually learned they were mutants themselves, and that Marshall's drug had awakened their latent powers. Though they tend to target ordinary street criminals, they have faced such diverse foes as Doctor Doom, the Beyonder, Vermin, the Zapper, the Disciplinarian, the Warlord of Kampuchea, Set, Mephisto, Thanos, the Assembly of Evil, Firebrand, and Lightmaster.

Cloak and Dagger found sanctuary at the Holy Ghost Church with the sympathetic Father Francis Delgado; but over time, Delgado became romantically obsessed with Tandy. Regarding Cloak as a demonic influence, Delgado tried and failed to split up the duo, going mad in the process. After Delgado was institutionalized, Cloak and Dagger found a new mentor in Tandy's uncle, Father Michael Bowen. Tandy's father, meanwhile, had become a cult leader as the Lord of Light in India. A "light vampire" who fed on others' life force, he clashed with Cloak and Dagger until he realized what he had become and tried to atone by hurling himself into Cloak's ebony abyss.

Police detective Brigid O'Reilly regarded the duo as a menace until they helped her capture serial poisoner Duane Hellman and told her of their origins. Later, when O'Reilly was betrayed and left for dead by corrupt cops, Cloak and Dagger used their powers to save her life, but the experience mutated Brigid's body and warped her mind. She became the vicious superhuman vigilante Mayhem, often fighting crime alongside Cloak and Dagger. O'Reilly's former partner, police detective Rebecca "Rusty" Nales, would become an ally to Cloak and Dagger as well.

Cloak continued to struggle with his power, and with the hungry Predator within his darkness. During a period when Cloak swore off consuming living beings, the Predator released the spirit of legendary killer Jack the Ripper to torment Cloak; however, when Jack betrayed the Predator in search of personal power, Cloak absorbed the madman and the Predator consumed Jack again. The drug-dealing crime boss Ecstasy (Renee Deladier) twice stole Cloak's powers for herself, largely because the Predator preferred the more ruthless Deladier as a host body. Cloak regained his powers both times, thanks in part to Doctor Strange. When the dream-demon Nightmare targeted Cloak, Tyrone prevailed with the aid of Dr. Strange and Dagger, who even managed to nullify Cloak's darkness altogether for a time; however, Tyrone feared that Dagger could only relate to him as Cloak, and he was soon manipulated into reclaiming his dark powers by the malevolent mystic Mister Jip. Tyrone's willing resumption of his Cloak form estranged Dagger, who briefly worked with the Black Cat before going back to Cloak, who had tried and failed to find a new partner in Dazzler. By this time, Jip was trying to usurp Cloak's body with the aid of his agents, Night and Day. Dagger defeated them all with the aid of the Predator, and the partners were reunited. Jip would continue to hound them, striking Dagger blind for a time, using the mad Delgado as a pawn, temporarily corrupting Dagger through the power of Night, and killing both Delgado and Father Bowen by mystically usurping their bodies. Cloak and Dagger would thwart Jip's plots again and again.

Though Cloak and Dagger once rescued homeless youth Anna Johnson from cultists, only Anna herself was aware of the fact that she is Tyrone's long-lost sister. Tandy did stay in touch with her stepfather Philip, who persisted in offering Tandy moral and financial support. He even moved to New York City to be near her, caring for her during her temporary blindness, and the two gradually developed a real father-daughter relationship. Sadly, he was killed by an overdose of the designer drug D'Lite, a creation of the demonic D'Spayre, who feeds on human misery. D'Spayre revealed that he had helped create Cloak and Dagger, whose powers would have been quite different had they developed normally. Apparently, their powers would have activated naturally through contact between Tandy and Tyrone; but D'Spayre inhibited this reaction, allowing Marshall's drug to trigger their powers instead. D'Spayre also secretly placed two aspects of his own power--one light, one dark--within the teens, reshaping their mutant powers. These dark and light forms were meant to act as storage batteries for D'Spayre, accumulating pain and suffering he could tap for future use. He had selected Tyrone and Tandy as host bodies since he thought mutants were especially prone to suffering. When D'Spayre tried to reclaim the light and dark forms for himself, Cloak and Dagger resisted, and D'Spayre was seemingly destroyed. In the process, Cloak's and Dagger's powers were altered, though their original abilities reasserted themselves over time.

Cloak and Dagger are devoted to each other, but the lonely Dagger often wants more from life. While on an international case, Tandy performed with Eurocirque as Lady Light and shared a romance with supposed FBI agent Bill Clayton, who was exposed as a criminal but ultimately sacrificed himself to save Cloak and Dagger. Tandy found new friends in the New Warriors, who teamed with Cloak, Dagger and other heroes to defeat the shadow-lunatic Darkling.

Cloak and Dagger teamed with Spider-Man and others to halt a murderous super-villain rampage led by metahuman serial killer Carnage. Dagger was supposedly killed by Carnage's "wife" Shriek while saving an injured Spider-Man, but was later revealed to be severely wounded and recuperating within Cloak's shroud, and was the key instrument in breaking up the Carnage "family" and ending the "Maximum Carnage."

Later, Dagger helped rescue the New Warriors from the supremely powerful Sphinx. She accepted an offer of New Warriors membership, though Cloak declined to join. Serving as a Warriors reservist, Dagger also undertook a single mission with the informal Secret Defenders group.

Bloodthirsty fellow vigilante the Punisher has been both an ally and an enemy to Cloak and Dagger over the years. When Cloak went missing recently, Dagger helped form the unofficial "Marvel Knights" alliance with the Punisher and other vigilantes, and joined most of the other Knights in hunting the rogue Punisher after he left. Meanwhile, a Nightmare-manipulated Cloak embarked on a mad quest to consume all lawbreakers, absorbing the Punisher and many others until Dagger teamed with Dr. Strange to purge Cloak's corrupting darkness and rescue his victims. In the process, Cloak reverted to his human form as Tyrone Johnson, though this condition would prove temporary. Shortly thereafter, the Marvel Knights disbanded.

More recently, the secret criminal group known as the Pride tricked Cloak and Dagger into trying to retrieve their super-powered children. An encounter with these young Runaways soon convinced Cloak and Dagger of the Pride's true nature, but before they could act on this knowledge, the villains erased the duo's memories of the Pride. Cloak and Dagger continue to roam the mean streets, bringing the light of hope to the innocent and dark justice to the guilty.