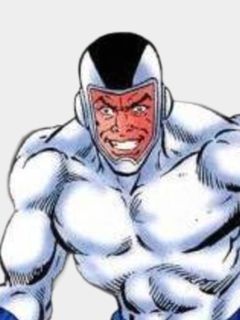 Dr. Gregor Shapanka, an employee of Stark Industries, was conducting private research into a means for achieving physical immortality. He attempted to rob the private vault of Anthony Stark; head of Industries, in order to obtain microtransistor designs that Shapanka intended to sell to finance further research in his private project. However, Shapanka was unsuccessful in his theft; captured, he was brought before Stark, who fired him.

Subsequently, Shapanka created a suit that could generate intense cold, with which he hoped to slow his own aging process. Shapanka also began to use the suit and its abilities to commit crimes in order to amass wealth. The news media named this new criminal "Jack Frost," perhaps in recollection of the member of the Liberty Legion who could generate intense cold. Seeking vengeance on Stark, the new Jack Frost captured Stark's secretary, Virginia "Pepper" Potts, and his chauffeur, Harold "Happy" Hogan, and battle Stark's supposed bodyguard, Iron Man, who was secretly Stark himself. Iron Man defeated Jack Frost and thus saved his captives, and Shapanka was sent to prison.

Years later, Shapanka escaped prison and attacked Stark's Long Island industrial complex using a new, far more powerful cold-generating battlesuit and calling himself the Blizzard. This time the Blizzard was out to steal Stark's climatron device, which could be used to alter weather patterns. The Blizzard nearly froze Iron Man to death, but Iron Man was rescued by Potts, Iron Man caused the Blizzard's battlesuit to short-circuit, and then captured him.

Later, once again at large, Shapanka obtained financing for recreating his cold-generating costume from multimillionaire Justin Hammer. The Blizzard formed a partnership with two other clients of Hammer, Blacklash and the Melter, and together the three criminals attacked a hotel casino in Atlantic City, only to be defeated by Iron Man and private bodyguard Bethany Cabe. The three criminals were sent to Riker's Island but were freed shortly thereafter by Hammer and brought to Hammer's floating villa. There the Blizzard joined a small army of costumed criminals in battling Iron Man, who succeeded in defeating them all.

Later, somehow Shapanka's body gained the ability to generate intense cold without artificial means. Feeling alienated from humanity, Shapanka, again calling himself Jack Frost, went to live in an ice palace he created within a mountain. The Hulk found Jack Frost's new home and destroyed the ice palace. Jack Frost was seemingly killed in the collapse of his ice domain.

But, months later Shapanka reappeared in the guise of the Blizzard. Somehow Shapanka had lost his bodily power to generate cold and once again need his battlesuit to create low temperatures. Shapanka returned to crime and formed a gang to aid him. However, upon robbing a bank in New York City, the Blizzard and his henchmen were found and defeated by Spider-Man, and were taken into police custody. But thanks to his lawyer, Shapanka was soon back at large, and kidnapped Bobby Saunders, a boy whom he saw speaking with Spider-Man. Through Saunders; Shapanka intended to get revenge for his most recent defeat.

Arno Stark, the Iron Man of 2015 A.D. in an alternate future, had traveled back in time to locate Saunders. (In the alternate future, which Arno Stark had come, the adult Saunders was a terrorist who had armed a highly destructive bomb before dying. Suanders' retina patterns were the key to disarming the bomb. Therefore, Arno Stark had gone back in time to discover what those patterns were by locating the Saunders of that time.) The future Iron Man found Shapanka and Saunders and carried Saunders off. Shapanka, wearing another cold-producing battlesuit, believed this Iron Man to be the same one he had fought so often before, and attacked him. The future Iron Man then annihilated the Blizzard with a blast of energy.