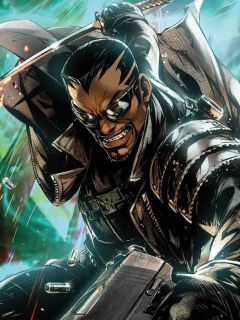 The man known only as Blade came into the world an orphan. Bitten while in labor by the vampire Deacon Frost, his mother, a prostitute named Tara Brooks, died during childbirth. Blade was taken in and raised by his mother's friends. Determined to avenge her death, he fashioned himself into a vampire hunter even before he reached adulthood.

After stalking the night on his own for a number of years, Blade became leader of a small band of like-minded individuals hunting Dracula. He first encountered the dark lord in Japan, after many months of searching. Blade lured Dracula into an ambush, and the vampire was slain with a wooden stake. However, Dracula soon was resurrected by his servants and exacted revenge by murdering Blade's entire band of vampire hunters.

Blade pressed on, often fighting alongside a team led by Quincy Harker, the great vampire hunter. The company's members included Rachel van Helsing and Frank Drake. Later, Blade teamed with vampiric private eye Hannibal King to hunt down and destroy Frost. Blade, King and Drake helped Dr. Strange, Master of the Mystic Arts and Earth's Sorcerer Supreme, cast a spell that destroyed Dracula and all the vampires on the planet. Following their victory, King was cured of his vampirism. Subsequently, he and King formed a private-investigation firm.

The mother of all demons, Lilith, hired Blade's agency to kill Ghost Rider -- the leather-clad, motorcycle-riding Spirit of Vengeance -- and bad-boy John Blaze, the fiery skeleton's former host. After a protracted battle, Blade and company realized they had been duped. The team joined with Ghost Rider and Blaze against Lilith, battling her monstrous minion Meatmarket. Blade, Drake and King continued their partnership with Ghost Rider and Blaze. Along with Dr. Strange, Morbius the Living Vampire and the Darkhold Redeemers, they formed the Midnight Sons, a group dedicated to preserving the boundaries between our world and the dark realms. The Midnight Sons clashed with Lilith and her demonspawn, the Lilin, in a supernatural contest with Earth as the prize. The Midnight Sons proved victorious, destroying Lilith and her brood.

Blade's desire to destroy supernatural enemies led him to be tricked into using the Darkhold. As 'Switchblade' he attacked a number of supernatural beings and stole their power in the 'Midnight Massacre'. Eventually Blade was stopped and another page of the Darkhold was used to restore things back to normal.

However, the team was unable to prevent its hated quarry, the vampire, from returning to the Earth realm. Blade, Drake and King, who again had become afflicted with vampirism, began their crusade anew to cleanse the world of all bloodsuckers. Blade and his partners clashed with dread lord Varnae -- supposedly the first vampire, the demon who had visited this hellish curse upon men. King and Drake were slain in a bloody and futile battle. The loss of his compatriots only strengthened Blade's resolve to rid the world of vampires, regardless of the circumstances of their creation.

Dracula soon returned. Blade was alerted by Bible John, and the two fought Dracula and later Marie Laveau, who was attempting to resurrect Varnae. It appeared that King and Drake had somehow been merged into Dracula when he was resurrected, but the two have since been freed.

Blade was also temporarily in SHIELD custody due to the machinations of SilverEye (SHIELD Division) as they sought to use him.

Following the Skrull invasion of Britain, Blade joined MI:13 to aid with the resurgence of evil forces, resulting from the Skrulls defeat. Blade failed to ingratiate himself, however, when he attempted to kill fellow team member, and part-vampire, Spitfire. Both Spitfire and Blade however settled their difference and pursuied a romantic relationship.