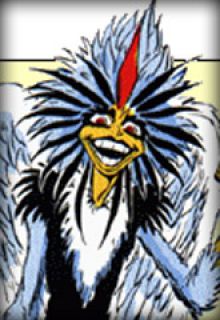 On a remote island in the North Atlantic, the Ani-Mator began his experiments. He had been recruited by The Right, but had turned into a rogue scientist hell-bent on producing the perfect breed of animal-men hybrids, which he dubbed the Ani-Mates. The Ani-Mator turned his rocky island into herpersonal idea of 'Paradise' where he was a God over the Ani-Mates; giving & taking life on a whim.

He created these creatures in a secret underground laboratory, where they grew from tiny test-tube experiments. Each 'Lot' of Ani-Mates was released onto Paradise where they lived wild. However, they were subliminally programmed to respond like Pavlov's Dogs whenever an alarm sounded. They would subconsciously put themselves into mortal danger, travelling through a dangerous maze of caverns filled with sophisticated & deadly traps. If they managed to survive the trial then they would receive food as a reward. Should an Ani-Mate survive enough trials to warrant the attention of the Ani-Mator, then he would bestow them with a name & a piece of clothing.

One of the Ani-Mates was a passive bird like male. He sought to escape Paradise and managed to fly across the ocean towards America. He was eventually found by an American fishing crew who captured him and turned him over ot the authorities back on the mainland. When the media heard of this strange creature, they started to write stories about the bizarre Bird Boy.

Wolfsbane had heard the news reports about Bird Boy, and suspected that he might be another animal-based mutant like herself. However, the other New Mutants weren't interested as they were too busy preparing for Lila Cheney's album launch party. At the party, a humanoid alien race convinced Cannonball to take drugs which made it difficult for him to stand, let alone fly. When the alins tried to kidnap & kill Cannonball, he tried to fly away. However, he flew straight into a tall dark tower. Although his Blast Field protected him from the impact, the building broke apart.

What no-one realised until the next morning was that the tower which Cannonball had accidentally broken was the temporary prison of the Bird Boy. News reports showed footage of Cannonball flying through the tower, and they informed the public that the Bird Boy had escaped. Since they had caused the mess, the New Mutants finally agreed to Wolfsbane's request to search for Bird Boy. However, by the time the New Mutants arrived in the city their main rivals the Hellions were also interested in tracking down the Bird Boy.

The two mutant teams had a contest to see who would be the first to capture & recruit the Bird Boy. Mirage created an illusions of the Bird Boy's greatest desire; a heap of fish & maggots to eat. So they split the team up; one half to distract the Hellions, the other half to find food for Bird Boy. Although the fight with the Hellions was fierce, the New Mutants ultimately won. Magik teleported the freshly caught haul of fish to act as bait, and as soon as the Bird Boy landed on the large pile of fish they teleported back to Xavier's School for the Gifted.

Back at the school, the New Mutants struggled to cope with the Bird Boy. He would run around, flapping his wings & squarking until Magik teleported in more fish & maggots. They soon discovered that by creating a tropical island setting in the Danger Room helped to keep him calm. However, Magneto de-activated the Danger Room programme and accidentally startled Bird Boy. Although Magneto was alarmed by how his students had smuggled the strange creature into his school, he had no objections to keeping Bird Boy around to investigate whether he really was a mutant or not. However, since Cerebro was broken, and Magneto was struggling to repair it, they could not confirm what kind of species the Bird Boy was.

Wolfsbane implored Cypher to communicate with the Bird Boy. However, Cypher reacted coldly towards him claiming that it wasn't any kind of language to translate. To mock the Bird Boy, Cypher claimed that he was more of a Bird Brain; a name that stuck.

Wolfsbane was desperate to help Bird Brain adjust to life as a teenager in modern day America. She dragged him to their computer lessons, where he tried to eat the characters as they were being typed on the monitors. However, his chaotic behaviour rattled the other New Mutants and only made Cypher's mood even worse. Magik noticed how reticent Cypher was and accused him of being jealous, since Bird Brain had all of Wolfsbane's attention.

Spitefully trying to get Bird Brain into trouble, Cypher suggested that they shouldn't keep Bird Brain cooped-up indoors. Therefore the New Mutants began to plan a trip to a local burger bar. They took one of Cannonball's old uniforms, and cut whole in the back for Bird Brain's wings. They covered him up with a hat, trench-coat, large novelty sunglasses and some of Beast's old shoes.

Magik teleported them all to a quiet secluded spot around the corner from the restaurant, and they soon found themselves a booth away from the prying eyes of the general public. Despite his new disguise, Bird Brain was still extremely unusual. His behaviour made things worse. Bird Brain would click & squawk loudly, and when their food arrived he launched himself across the table to steal everyone else's meals. Cypher remained stubborn, but his dislike of Bird Brain intensified when his fries were stolen. However, Wolfsbane remained enchanted by him, and began to encourage Bird Brain to talk. After managing to squawk 'fries' and 'chocolate shake', he was rewarded with more fast food. However, his lack of table manners grew out of control, and it resulted in a small food fight. The New Mutants were forced to flee the restaurant; giving the waitress all their allowance to cover the damages.