1.2M
Little update on this.

The Database itself didn't need a lot of change, that was done on about 15 minutes. There's just way more work to be done on the different pages that are connected to the Battles. I have to re-write, at least some code, on every page that has to do with Battles.
I need at least a few hours in a row to work on it, and I just did not have the time for it really. There were some bad updates recently, losing data, that also put me down a bit to do another big update. The data loss really bothered me a lot.

The Battle Royale feature is still one of my top priorities, and I personally want to use it, but it just takes more time than I realised before.
Hope you are still entertained with the other features of the Superhero Database till BR is live.

Again, sorry it is taking so long.
show 2 replies

Any updates about the tags as well?

1.2M
@Tigerking2020 Please keep this Topic about the Battle Royale. I don't want to mix things.

whatever happened to this?

@Galactus How’s it going with all this?
show 12 replies

@Galactus so how’s it going now ?

1.2M
@Mr_Incognito I doubt I promised anything.

18.1K
You said you'd be finished with it "next week" like three weeks ago.

It'll be finished when it's finished. No need to rush the process.

18.1K
Don’t give people a time estimate if you can’t keep it.

@Mr_Incognito no I’m pretty sure he’s said at the time he hoped to get it out by that time I don’t think he’s ever promised a for sure date yet. Calm down it’s not the end of the world

1.2M
I will never 100% promise anything unless it's a few minutes works.There will always be conditions.
I want it live as fast as possible, but stuff comes up. Like the data loss thing. That takes time and energy. I felt really crappy after that. I didn't want to hurry things after that loss.
It will be up when its 100% done.

44.1K
How is the classic battle royale design looking as of now?

7.2K
@Galactus Hows it coming along?

1.2M
Most future updates can be found on the To-Do list.
After the BR update I will put more time in my other project; Realm Forger

Hope its all going good with it

@Galactus I was wondering if it's possible if you could add the Battle Royale feature for now and then along the way add things to it whenever you're done with them as time goes by. This is just an idea.
show 2 replies

1.2M
No, that's not an option. Battle Royal, technically, uses the same (new) code as the 1 vs 1 battles. If I leave out the Variations for instance, the 1vs1 Battles also don't have that option.

It's been on the to-do list for so long now, those few extra days won't really matter anymore.

I don't mind waiting then, I'm thinking you probably could get it done by next week?

44.1K
Super hyped for this release
Will there be a limit for how many teams are in the battle royale
show 13 replies

1.2M
@Tigerking2020 Give me a drawing/sketch on what that would look like on a webpage, including vote buttons, vote count, percentage, character name, class, profile image, etc. And I'll think about it.

44.1K
@Galactus While I don't have a sketch yet, a suggestion for that is that once it reaches 16, you have a "read more" button that allows you to scroll down until you find a winner.

1.2M
@MS643262 Why not just scroll without the button? People will either not notice the button or ignore it, and vote for any of the first 16 teams.
The only way I see 100 (or any other large amount) maybe work, is by presenting it as a list/table. Something like how your uStat list is presented. This will only work for 1 member teams, though.

44.1K
@Galactus I do have myself a concept for battle royales (individual characters but not teams)

(Ignore the quality lol)
If you add a vote button on top of every individual icon as well as a power stats icon (instead of what's on here), that's what I can see with this feature.
Last edited: 3 mo 5 h 45 m ago.

1.2M
@MS643262 Made a quick test with what you described. Without any character information, and with minimal button sizes for mobile. This is on a iPhone 8 Plus (1080x1920px @3x scale factor).
There are 20 characters visible, meaning you have to scroll another 4x this height to see all the characters in a 100 character BR. I think that's too much. 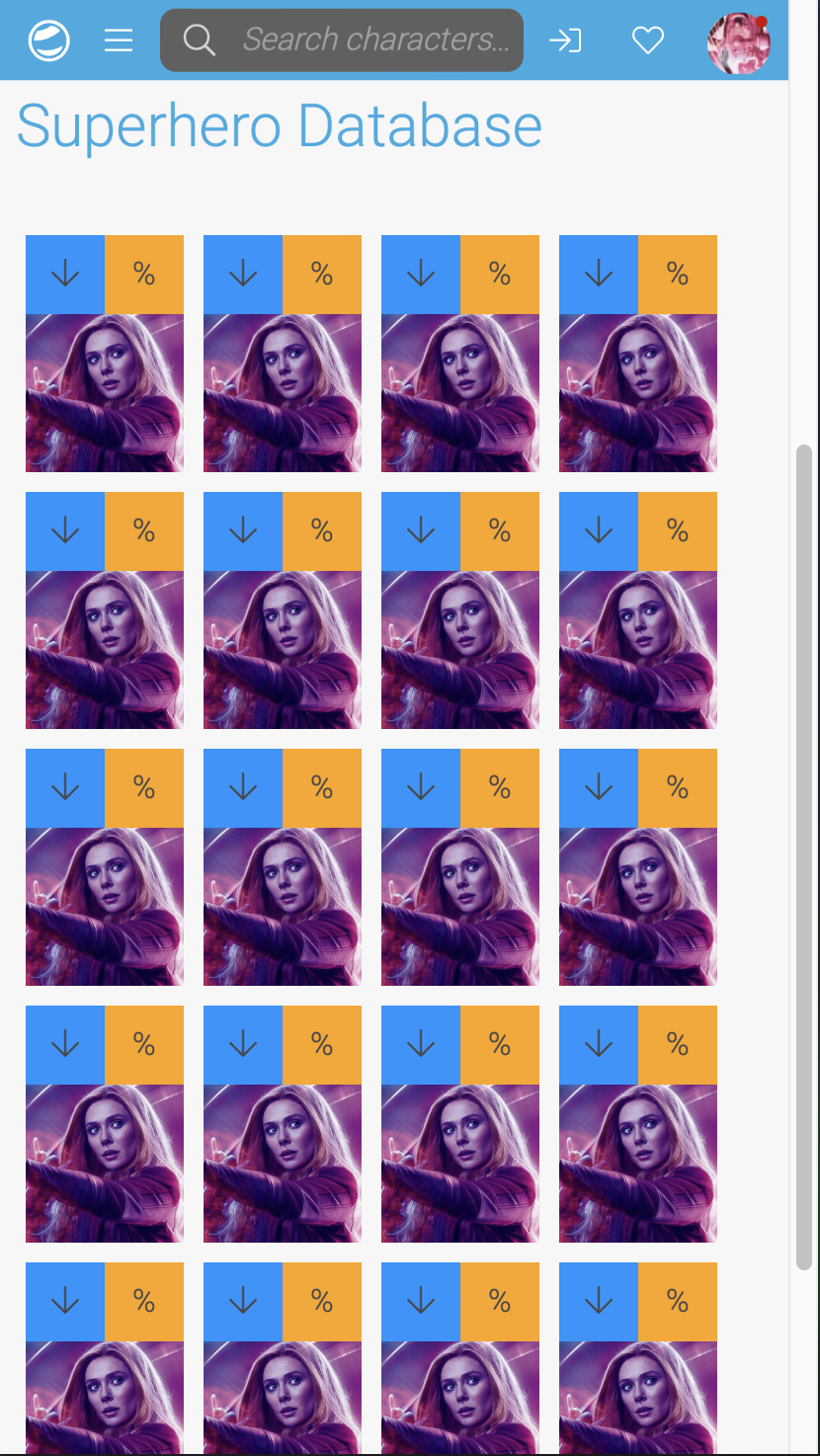 44.1K
@Galactus 100 maybe a bit much, considering 50 or 64 could be a potential.
This is a rough sketch including the things you said I forgot

1.2M
@MS643262 The text is too small, yet it doesn't even fit the width of the block. And you took the almost shortest character name too. Try this with "Negasonic Teenage Warhead".
It's just not going to work this way.

44.1K
@Galactus I'd suggest this but more largely spaced, especially between (Wanda) and (Pre-Wandavision), and removing 33K as that would be a part of power stats button (which should be larger than shown) 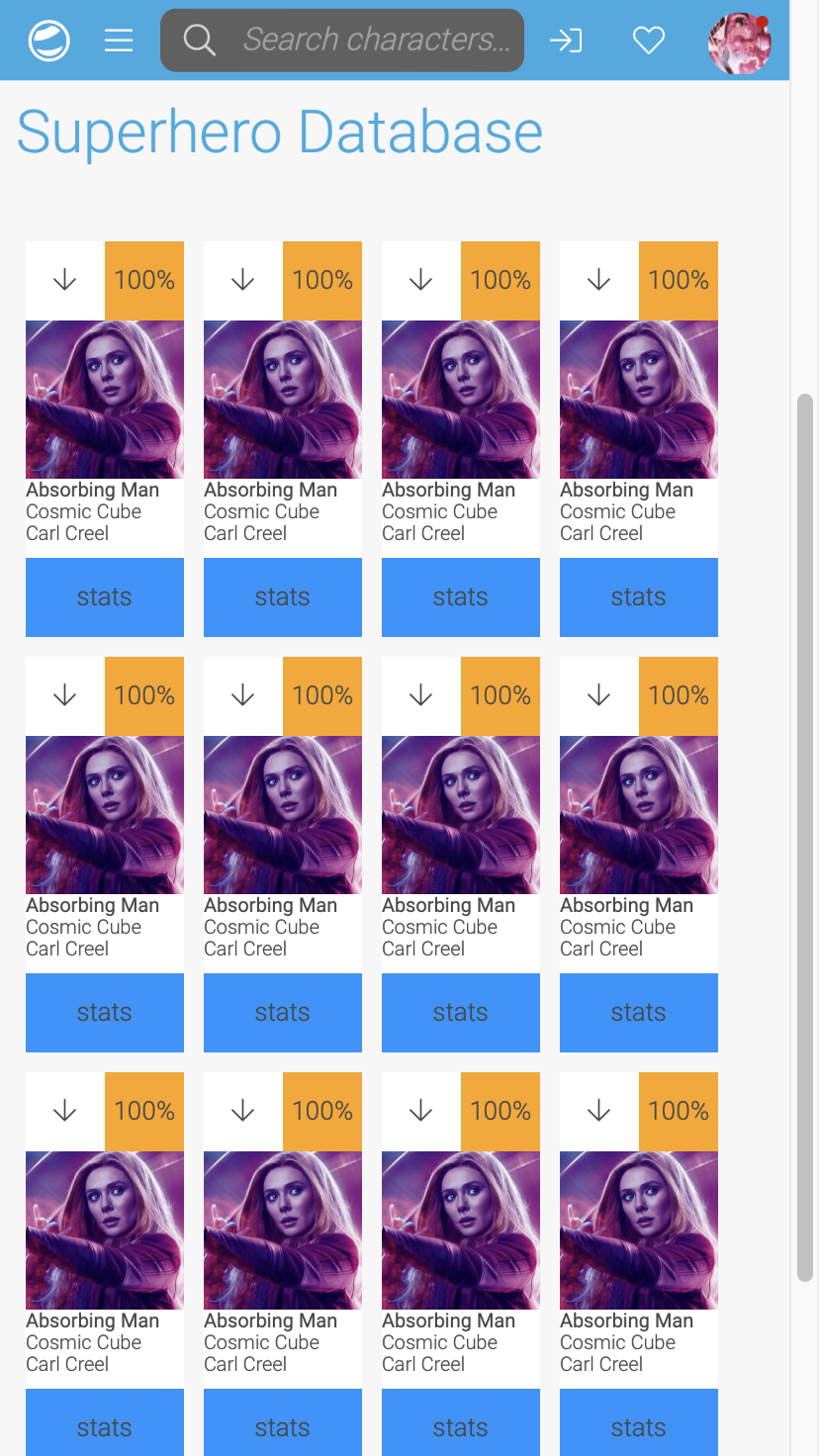 44.1K
@Galactus I see nothing wrong with that. If you want to fit large text such as "Negasonic Teenage Warhead," maybe the text expands in height, or have it shrink to fit the width of the image?
Either way I can see this happening
Last edited: 2 mo 27 d ago.

5.6K
The 1st time I heard about it. I thought it was like a tournament. Or is it?
show 1 reply 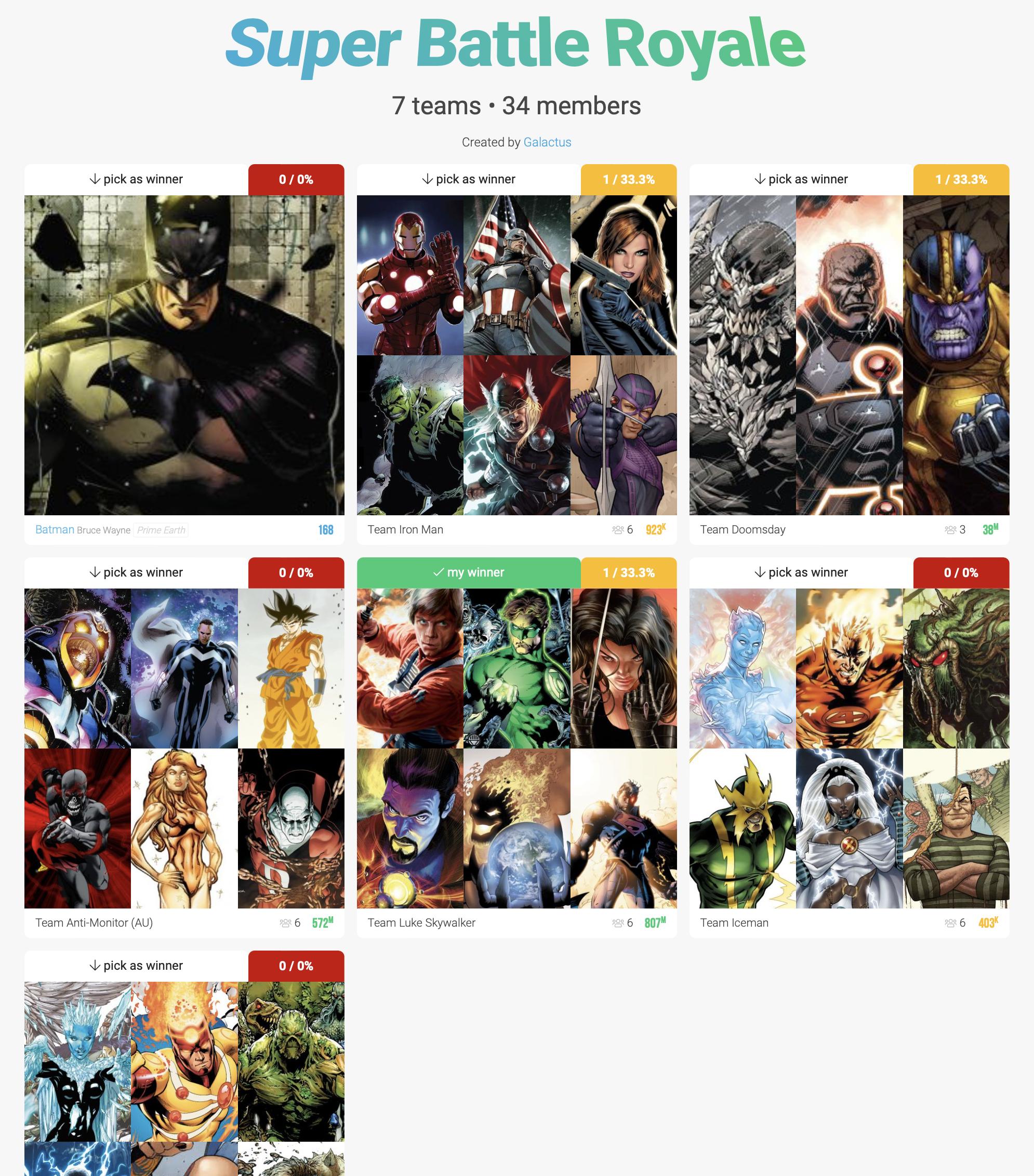 1.2M
@Unicron You can't put Publishers against each other, but you can pick characters of them in multiple teams.

How to multiple teams

1.2M
I planned on releasing the Battle Royale feature this week. I decided to do some more thorough design work before writing all the code.
The Battle vote page (without variations) is pretty much done. The variations/addition bring up some (design) questions that I try to answer. Technically I could make a 64 team x 16 member Battle with additions, but how am I going to show all that info.

To make this all work, there are going to be limits. I came up with the following four 'types' of Battles:

I want to make the creation a bit easier (better interface) based on what type of Battle you want to make.
That's where I'm at right now. I'll update this topic when I made some more progress.
Last edited: 3 mo 10 d ago.
show 1 reply