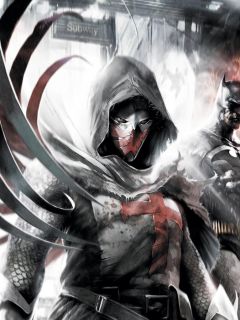 Michael Washington Lane, currently Azrael had a troubled life. He gained a football scholarship to Gotham University as a linebacker, but lost it his sophomore year after beating his coach unconscious. He then joined the marines and served for two tours in Iraq. When he came back to the states, he joined the Gotham City Police Department to provide for his wife and young son. His son was hit by a car and died at age three. His wife committed suicide within a year. Only six months after her death, Michael's two siblings (his last living relatives) were murdered by an apparent Satanic cult. This broke Michael's psyche, and he was dismissed from the GCPD.

Before his string of tragedies, Micheal was selected for a joint Military and GCPD experiment that was designed to create someone who could take over for Batman should anything ever happen to him. Micheal and two other police officers with military training were put through a series of experiments by scientist Doctor Hurt, which improved their strength and reflexes. The effects of the experiment combined with his personal tragedies made him go insane. Along with the "Bat-Cop" and "Bat-Bane," who also experienced adverse mental effects of Dr. Hurt's program, Lane, named the Bat-Ghost, and later Bat-Devil, plagued Batman for a short while, haunting him for the inadvertent destruction of the three men's lives. He acted as an agent of Doctor Hurt during Batman R.I.P., when he was piloting the helicopter during Hurt's attempted escape from Arkham Asylum. But the helicopter exploded and crashed into the water.

After the apparent death of Batman during Final Crisis, Lane confessed his perceived involvement in Batman's death to Father Day, who was a member of the Order of Purity. Micheal was then recruited by the order to be the next Azrael of their order. He was given the flaming Sword of Sin and the Suit of Sorrows, which had driven his predecessor, Abraham Arlington insane after just six weeks of wearing it.

For his first act as Azrael, Michael had to defend himself against Talia al Ghul and her League of Assassins. Talia, who still had possession of the Sword of Sin's sister sword, the Sword of Salvation, wished to retrieve the Suit of Sorrows so that she might give it to her son Damian Wayne. Using the added strength of the suit, and his training as Batman's replacement, the new Azrael was able to defeat Talia and her assassins, in Battle for the Cowl, and claim the Sword of Salvation as his own. However, Nightwing arrived, and challenged Azrael's right to where the Suit of Sorrows, believing him responsible for the death of an undercover police man. Azrael managed to explain that it was actually another person who had previously worn the suit of sorrows. Nightwing then arranged for Lane to wake up in his home with little memory of their encounter, but leaving the Suit of Sorrows and the Swords of Sin and Salvation for Lane to use, along with a note saying "If you screw up I'll take them away."

Azrael later united with Batman, Robin, and The Question to take down a satanic cult that was responsible for a string of kidnappings, and who wanted to summon the incarnation of the "Eighth Deadly Sin."

Lane continued to work in his new role as Azrael, albeit with some hesitation. He was assisted by a man from the Order of Purity called Adrian Paratino. He had several adventures, which included infiltrating a cult who believed that Faith was the eighth deadly sin (which forced him to work with the WhiteGhost, confrontations with Huntress and Ragman,) and fighting in a brutal manner against several particularly nasty criminals.

The Killer of Saints

However, Lane's tenure as Azrael began to go downhill, and throughout all of this time, he was slowly descending into insanity. Father Day, a man from the Order of Purity, informed him of a person called The Crusader who was systematically hunting down and killing members of the Order, in an effort to discover the name of the man who knew one of the Order's biggest secrets. Father Day revealed that the Crusader was after the Shroud of Turin, which was part of an elaborate conspiracy theory which purportedly disproved the resurrection of Jesus Christ. The Crusader was a man recruited by the Roman Catholic Church to find the Shroud and destroy it, and thus the evidence. Father Day then convinced Azrael to help him keep the Shroud secure. Meanwhile, the Crusader had found Father Grieve, and was torturing him. Azrael battled the Crusader, and eventually impaled him with the Sword Of Salvation, which allows both the wielder and the victim to see the truth behind their actions. The Crusader saw a vision of the Pope apparently being the Devil, and then fled. Meanwhile, Father Grieve had been tortured by the Crusader, and wished to speak with Azrael privately before he died. He told Azrael that he, Michael Lane, had been found to be a descendant of Jesus Christ, following a study of the DNA found on the Shroud of Turin. Azrael then broke Grieve's neck before departing with Father Day.

Three Mysteries and the Tears of God

Shortly after Michael Lane returned to Gotham City, he was approached by Batman while acting as Azrael, who offered an invitation to join Batman Incorporated. What Grayson did not know was that Michael Lane/Azrael had been spiraling even further into madness, thanks to the Suit of Sorrows, to the point where he ran madly down the streets of Gotham City shouting at everyone to repent. Thus, in a blind and mad rage, Azrael stabbed Batman with the Sword of Sin, causing him injury, though he had just enough of a grip on his sanity to pull it back out before it killed him. Azrael fled the scene, and enlisted the aid of his friend from the GCPD, Pete Farelli, to kill himself. Azrael told Farelli that he had been hearing what he understood to be the voice of God, telling him to do the deed. Farelli was initially loath to do such a deed, until Azrael stabbed him with the Sword of Salvation, causing the police officer to change his mind. With a dagger provided by Adrian Paratino (who, unbeknownst to Azrael, was actually working for Ra's al Ghul) as a "cure" for his madness, Azrael took off his armor, stabbed himself, and had Farelli strap him to a stone crucifix located at the Church of the Holy Redeemer. Thus he died. Meanwhile, Batman had sent Dick Grayson as Batman to investigate, and he discovered Farelli's role in Lane's death, and that Michael Lane and his sister-in-law, Jenny Lane, had been lovers. The White Ghost then came to distract Grayson, allowing an accomplice of the White Ghost to steal Lane's body, along with the Suit of Sorrows and the Swords of Sin and Salvation. Further investigation by Grayson and Batman revealed that Lane's body had been exposed to fluid from a Lazerus Pit. Meanwhile, Michael Lane wakes up in what is apparently Purgatory, and is greeted by the ghost of Father Grieve. Grieve explains that Michael must navigate his way through Purgatory while being chased by the souls that every Azrael has ever killed if he wants to come back to life. Lane succesfully does this, and wakes up in Ra's al Ghul's compound, with Batman (Bruce Wayne) at his side. Batman once again asks Azrael if he will join Batman Incorporated, but Azrael scoffs at the offer, stating that while Batman fights a war on crime, Azrael's war is with sin. However, Azrael did agree to work with Batman, before leaving Ra's al Ghul's compound, accompanied by the ghost of Father Grieve.

Azrael immediately went to the Order of Purity's base in Gotham City, where he greeted Father Day. Initially shocked that Lane was alive, Father Day shook off his astonishment and detailed Azrael's next mission, in which he had to go to Afganistan in order to deal with an extremist Muslim group known as the Brothers of the Sword, specifically a powerful meta-human known as Fireball who was working with them. This was also serving to Batman Incorporated, as the area was too sensitive for them to operate there. Batman (Bruce Wayne) informed Azrael of this before he departed. Azrael traveled to Afghanistan, where he tracked the Brothers of the Sword to a small village, easily defeating them. He had become nearly invincible due to the Suit of Sorrows boosting in power when Lane came back from the dead. Azrael confronted Fireball, who led him out into the dessert and engaged him in a brutal fight. However, the two were far too evenly matched to accomplish anything in their fight. Ra's al Ghul then arrived on horseback, and revealed that he had taught Fireball how to use his powers. Ra's al Ghul then raced with the two back to the village, but they were too late to prevent it from being tragically destroyed by the U.S. Army, completely wiping out the Brothers of the Sword and the last of Fireball's family, causing Fireball to collapse in grief. Ra's al Ghul then told Azrael of his plans for a "new world order," and offered to fly Azrael and Fireball back to Gotham City, which Azrael accepted. Once he arrived back at the Order of Purity's base in Gotham City, Michael Lane talked with Father Day and his only remaining relatives; Jenny Lane and her children. Lane went to look over Gotham City, when the the ghost of Father Grieve arrived, and told him that he, Michael Lane, Azrael, would soon be instrumental in the judgment and destruction of Gotham City.