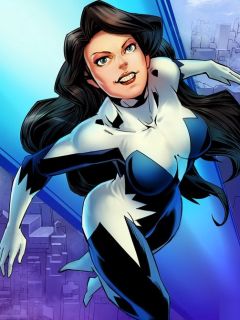 Originally she could only generate light when in physical contact with her twin brother Northstar. Should she link hands with Northstar, they could generate a light equivalent to a lighthouse beacon (one million foot candles) by each sibling’s varying the rate of acceleration of his or her own molecules out of phase with those of the other's.

She can generate from her body a bright white light equivalent at maximum intensity to half million-foot candles. She does so by varying the rate of acceleration of the molecules of her body out of phase with one another, thereby generating a cascade of photonic discharges.

ability to send out a calming light that the target feels emotions and memories that make them at peace. It can even be used to break telepathic control.

ability to send out powerful concussive blasts that can do considerable damage. She can project these from her hand and out from her body in a series of concussive bursts.

She has the ability to project lighting blasts with devastating results.

She possesses the ability to propel her body at superhuman speed, becoming a living projectile. Through an act of concentration, Aurora can channel a portion of the kinetic energy of the atomic motion in her body’s molecules in a single direction. This can accelerate her body in a velocity in direct proportions to the amount of kinetic energy she has tapped. It was once theoretically possible for her to reach 99% of the speed of light (186, 272 miles per second in a vacuum), although she never traveled at anywhere near that speed since if she did, she would wreak great damage upon herself and her environment. Aurora can also move a portion of her body at superhuman speed at a time. Dr. Langkowski's actions in molecularly restructuring Aurora's body greatly reduced the potential limits of her speed. She now can move at speeds roughly up to the speed of sound (about 770 miles per hour at sea level). This reduction has made little difference in the use of her powers over short distances, since she can still move faster than the human eye can follow.

She has the ability to accelerate the molecules within an inanimate object or a living being by touch, causing the target to tear itself apart from the subsequent stress generated upon it.

She possesses reflexes far above the average human. Reflexes are so advanced that she can go through an entire apartment, checking all the rooms and taking out the survivors in just mere seconds.

She has the ability to propel herself through the air. To hover in mid-air Aurora applies thrust downward in a carefully controlled manner. When carrying another, unprotected human being aloft, Aurora does not move faster than 60 miles per hour in order that her "passenger" may be able to breathe easily (Aurora herself can breathe at somewhat higher rates due to training) and so that the "passenger" will not suffer harm from wind, friction, or air turbulence.

She possesses a boosted metabolism that can be used to heal wounds quickly.

As a side effect of partially robbing her molecules of their atomic motion, the binding forces within and between the molecules increase. This enhances the sheer toughness of Aurora's entire body. This effect gives her skin enough durability to withstand the ravages of wind, friction and air turbulence.

She has the ability to use her super speed to automatically compensate for any G-Force difference.

Langkowski claimed he had made Aurora undetectable to gene-scan devices that look for mutants.