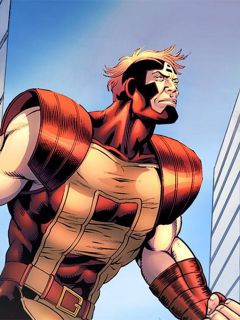 Erik's sister died in an accident and Erik blamed himself thinking he could have prevented her death. He turned to crime, he became a mercenary hired by Nazi scientist Baron Heinrich Zemo to smuggle stolen technology into Zemo's secret South American stronghold. With this equipment, Zemo built a machine that could project an unknown form of mutagenic radiation ("ionic rays") capable of bestowing superhuman physical powers to a subject. Zemo's first subject was industrialist Simon Williams, who became known as Wonder Man. When Zemo fled his South American base shortly thereafter, he left his "ionic ray" machine functional. Josten, who had been wounded by South American authorities in his latest smuggling venture, sought refuge in Zemo's now abandoned fortress and learned of Zemo's machine. There, Josten came to the mystical attention of the Enchantress, the Asgardian goddess who had been a former ally of Zemo. The Enchantress offered Josten the chance to submit to "ionic ray" treatment and he readily accepted. When the radiation treatment was through, Josten emerged with physical powers roughly equivalent to those of Wonder Man. The Enchantress produced a costume for him and dubbed him Power Man. Traveling to the United States, Power Man assisted the Enchantress in her scheme to discredit and defeat the Avengers. When that plot failed and the Enchantress disappeared, the love-smitten Power Man surrendered to the Avengers. The Avengers refused to press charges, however, and Power Man was released.

Power Man soon met and allied himself with the criminal Swordsman and the Russian spy, the Black Widow, who at the time had been brainwashed by the Red Chinese. In battle with the Avengers, Power Man and the Swordsman were defeated but not taken into custody. Shortly thereafter, there were pitted unsuccessfully against Captain America by the Red Skull. The Skull returned the two to where he found them and shortly afterwards the two partners were summoned by the Mandarin to aid him in his scheme of world conquest. Defeated by the Avengers in South America, Power Man and the Swordsman managed to escape while extradited back to the United States. Later the two were contacted by the criminal Grim Reaper and invited to join his Lethal Legion for the express purpose of exacting revenge upon the Avenger. Although the Legion managed to capture all active Avengers, the Avengers escaped and subdued their captors. This time the Avengers pressed charges and Power Man and most of his teammates were tried and imprisoned. When Josten was released, he learned that the name "Power Man" had been assumed by the hero-for-hire Luke Cage. Battling Cage for the right to the name, Josten lost. Inexplicably, the strength conferred upon him by Zemo's machine was on the wane. Disheartened by the defeat, Josten shelved his costume and took a job as a dockworker in order to renew contract in the smuggling profession. Count Nefaria, who offered him a chance to regain his former strength in exchange for special services, then sought him out. Josten performed Nefaria's errands and was subjected to a strength enhancing treatment. However, the bargain was all a scheme by Nefaria to steal the power of Josten and his other henchmen for himself. Josten managed to escape while the Avengers battled Nefaria. He returned to the docks where under the name the Smuggler he set up a successful smuggling operation for black market goods. Spider-Man stumbled upon Josten's business, however, and with Josten's strength now a fraction of what it had once been, Spider-Man managed to defeat him in combat. Turned over to the authorities, Josten was sentenced and incarcerated for the second time.

When he was finally set free, Josten left the East Coast and headed toward California. While in prison, Josten had heard of a criminal scientist in Los Angeles who specialized in the study of superhuman powers, Dr. Karl Malus. Arranging a meeting with Malus, Josten again made a bargain to renew his lost strength. Unlike Nefaria, how ever, Malus did not renege on the deal and not only enhanced Josten's strength to its original level but also subjected him to an extract of extract of the growth formula created by Dr. Henry Pym, the original Giant-Man (as well as the original Ant-Man, Goliath, and Yellowjacket). Malus acquired it from a patient of his who had stolen it from Pym's one-time partner Dr. Bill Foster (also known as Black Goliath and the second Giant-Man). The Pym Formula reacted with the strength-enhancing treatment to give Josten far more physical power than he had ever known. Josten decided to take the Goliath, deriving satisfaction from stealing a hero's name even as a hero once stole his. Exhilarated by his newfound power. Goliath rampaged throughout Los Angeles in a bid to make his might known to the world. He was challenged by a contingent of West Coast Avengers (including Wonder Man, whose power he once imitated, and Hawkeye, who had also used Pym's growth formula under the name of Goliath), who barely managed to subdue him by making him overextend his powers. Goliath was held in a special laboratory beneath the Avengers Compound in Los Angeles.

Allies of the Grim Reaper later freed Goliath. Goliath joined the Reaper in his battle against the West Coast Avengers, the Vision, and the Scarlet Witch. But after the Reaper and his allies were defeated, Goliath was returned to captivity.

When the Avengers and Fantastic Four seemingly died, Josten joined forces with Zemo and changed his alias to Atlas. To gain the general public's trust, Zemo and his Masters of Evil posed as a new group of heroes: the Thunderbolts. Zemo's plan failed but Josten and other members decided they preferred fighting for justice, and the T-Bolts set out to make their way as a legitimate super-team.

While attempting to defeat the criminal mastermind Count Nefaria, Atlas was forced to absorb into his body the discharge from Nefaria's ionic bomb. This destabilized Atlas' own ionic energies, causing him to grow uncontrollably and eventually discorporate. It remains to be seen whether this signals the end of Josten's career or the beginning of a new chapter in his life.

Later, however, he was kidnapped and controlled by Count Nefaria, who had found that he could mentally dominate people such as Josten who were powered by ionic energy. Wholly transformed into a being of ionic energy by Nefaria, Josten fought the Avengers and the Thunderbolts before the two teams united to defeat Nefaria. Josten's body was unaccustomed to the stresses that were unleashed by Nefaria's manipulation and was forced to be hospitalized. Josten then became the target of the latest Scourge (a.k.a. Nomad) who was hunting down and killing various members of the Thunderbolts. Josten was forced to fight Scourge, but his powers over-extended, threatening to destroy the immediate area. Scourge helped confine Josten with the help of size-altering Pym Particles, but Josten had perished in the explosion.

However, since Josten was by this time a being comprised of ionic energy, he in fact did not die. His ionic essence was able to seek out Dallas Riordan, contacting her through their mutual love. With Riordan's help, Josten could suffuse her being with his energy, allowing Josten to share her body. When Josten is in control of her body, Riordan appears as a fully-charged ionic being.

Josten was thus apt to return to the Thunderbolts in their latest attempt to stop the villain Graviton, a battle which sparked an alien invasion. Ultimately, Josten/Riordan and the rest of the Thunderbolts were shunted by Graviton to the world of Counter-Earth after he closed the aliens' dimensional portal, and the team embarked on a plan to return to their native Earth.

Atlas' growing powers seem to have made him unstable. He is fiercely protective of Songbird, and attacked Genis Vell. The Purple Man had Atlas sliced apart by the new Swordsman, but Atlas reformed himself yet again, apparently leeching energy from Vantage to do so.
Superhero Class