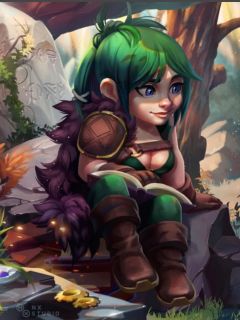 "He's so stubborn, oh yes he is!" she wiped her tearful eyes with her dirty hands, leaving stains on her face. "My father, the king of Ghirwil City, is so fixated on progress and his own scientific developments, he completely forgot that the mountain is our home! Nature needs our care. If my own father won't listen to reason, I'll go ahead and do everything as I must, without those excuses for advisors and the other sycophants!"

Astrid hit her fist against the dust covering the tunnel colonnade, plunking herself down on the floor. She closed her eyes and braced herself against the cold wall, trying to calm down. A noise in the eastern tunnel disrupted the girl's musings. She could distinctly hear the rambling speech of several drommers. She found their intonations odd, and the topic they were discussing even more so.

"The ritual... hummm... we can begin the ritual soon. The Lord is aware that I... that we're doing our best," spoke one voice. "All day long, all day long, all day... We implant crystals into those who didn't accept our Lord right away!" whispered the other. "Drommers alone won't be enough. We've obtained a new batch of animals. They grow quickly, and they'll accumulate more energy than any local resident." proclaimed the third voice, the loudest and most confident of the three. "I'm ready... ready to implant crystals into them all! The more crystals we implant, the more sacrifices we make. And the more sacrifices we make, the more energy we provide to our Lord!" the second voice murmured again.

Astrid tensed up. "What the... What Lord? Why would he want sacrifices...?" thoughts flashed in her mind. "Also, what animals are they talking about? There are hardly any animals in Ghirwil City, none larger than a mole!" The girl rose up and followed the voices, making sure to remain unnoticed. The voices never ceased.

"The king shall fall. Mmmaa... ummm... His fate is madness!" bleated one, his voice meek and unpleasant. "The masters won't help. Everyone, everyone will go mad. Everyone." whispered the next.

Astrid grew dizzy upon hearing the drommers mentioning her father, blood rushing to her head. She thought wistfully, "Dad, you're so immersed in science you can't even notice a betrayal under your very nose!" The girl proceeded further, down to a spot where the tunnel merged with a spacious hall. She could hear a loud clattering noise in it.

When the entire scene came into her view, Astrid found herself at a loss for words... There was no room left in the hall because of cages housing drommers of all ages and different clans, terrified looks on their faces. The captives were led up to a platform one by one, and the cultists, obviously fanatics, drove large Titanite crystals into their skulls with a hammer. The eyes of each victim rolled upwards at once, only to take on a dull and insane gaze when they returned. On top of that, each subject began whispering something about the Lord. Astrid diverted her gaze, unable to bear witness to such atrocities. Suddenly, she saw a cage standing at a distance from the others. A wondrous beast restlessly circled inside, growling and hissing. It resembled a cat the girl had seen in pictures in the Book of Tales.

Astrid, an avid champion of nature, didn't think another instant as her heart fluttered. The girl approached the cells holding the drommers captive and unbolted the doors of the nearest ones. Then she stepped up to the cage with the beast and opened it, jumping away at once. All because the beast seemed to be about to attack her, growling and baring its fangs. The crystals in its head swayed gradually as the predator prepared to leap at the girl. Astrid backed away, grabbed the first rock she could find, and flung it at the giant feline. A couple of the largest crystals split off from the beast's with a pitiful shriek head, leaving the animal to waggle its bushy head in confusion. It growled and fled, casting one last glance at Astrid.

The girl hurried to unbolt the other cages, ignoring the cultists running after her, their dark deeds abandoned. The drommers who had regained their freedom were too weak to help their rescuer. All they could do was drag themselves away from their captors. The circle of pursuers was closing in, and it wasn't long until Astrid found herself trapped without any chance to escape.

"Is this how I die," she thought, "turned into a madman like those poor souls with Titanite piercing their heads...?" Astrid prepared for one last battle, she wasnâ??t going to let them take her alive! Suddenly she heard a noise from beyond the corner of the hangar. It grew louder and louder, turning into a cacophony of sounds. And then, a mass of snarling teeth and claws tumbled into the chamber, sweeping the cultists aside in its path...

Once everything was over, the wild cats fled, all except one. The cat Astrid saved settled beside her with a matter-of-fact air. And then, it started to clean itself, starting with a spot inappropriate to even mention in polite society. "Did you only just realize that I'm not going to harm you, silly?" smiled Astrid. "Meow!" responded the animal. "Lucas! That's right! I'll name you Lucas!" Astrid exclaimed. "Purr, purr, purr," replied the â??cat,â?? not seeming to object to its new name. "Thank you," the girl uttered in a suddenly serious tone. "If you don't mind becoming my friend, I'll take you to meet my dad, King Khornak. There's a lot we have to tell him." "As long as it's not too late..." thought Astrid as she exited the hall with Lucas cheerful hopping along.
Superhero Class