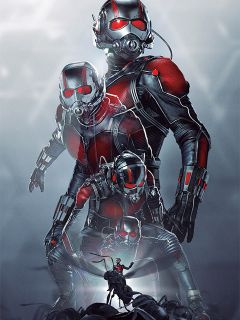 The Ant-Man suit was created by Dr. Henry Pym. It utilizes a rare group of subatomic particles, which have become known as the "Pym Particles." Pym tested the reducing serum on himself and discovered it was more powerful than he had expected: it reduced him to the size of an insect. Pym became entrapped in an anthill and was pursued by the ants within. He escaped and restored himself to his normal size with his other serum. Deciding that the serums were too dangerous to exist, Pym destroyed both of them.

The Ant-Man's Suit access to Pym Particles allow the user to bypass the Square-cube law of physics.

Inspired by his experience in the anthill, Pym undertook a study of ants, and theorized that ants communicate through psionic / electrical waves transmitted through their antennae. After months of work, Pym succeeded in creating his first "cybernetic helmet," which would enable him to communicate with the ants through transmitting and receiving psionic/electrical waves. Thinking that someday he might want to use Pym Particles again on himself, Pym designed a protective suit that safely allowed him to expose himself to the particle. It was made from Unstable Molecules and steel mesh.