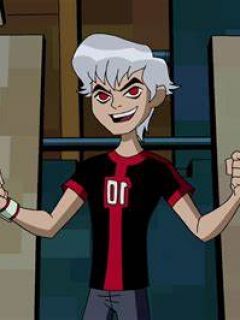 Albedo was a brilliant young Galvan scientist who served as Azmuth's assistant. In Trouble Helix, he had a hand in upgrading Malware into his current form when he was captured and forced to connect the new Helix with the old one. In the flashback, he was an ally of Ben Tennyson and was very loyal to Azmuth as he called him "First Thinker" and even fought for him when Malware approached.

At some point afterwards, Albedo asked Azmuth for an Omnitrix for himself, as he didn't trust "a mere human". Azmuth later fired him, although Albedo claimed he quit working for him. Albedo then used his knowledge of the project to build a copy, and set it to match Ben's. However, when doing so, he didn't know that Ben's DNA would become the default, causing him to permanently lose his Galvan form and become a clone of Ben.

Disgusted by what happened to him, Albedo traveled to Earth to get the Omnitrix from Ben in Good Copy, Bad Copy, planning to use it to restore his original form.

During his search for Ben, in at least three days, he savagely attacked at least three Forever Knight castles and a DNAlien hive, for the purpose of interrogation to discover Ben's whereabouts, causing the Knights to believe Ben Tennyson was attacking them for no reason and attracting Gwen's and Kevin's attention. When Albedo and Ben eventually met during Albedo's siege at another castle, Albedo pretended to be the creator of the Omnitrix, accusing Azmuth of being a liar, and asked Ben to hand it over. When Ben became suspicious and refused (after Kevin made him notice the twitch on his left eye each time he lied, which Ben has as well), Albedo transformed and attacked him in order to take his Omnitrix by force. After battling him twice, their Omnitrix's locked on with each other, almost causing feedback that could have destroyed the whole galaxy. During the process, Albedo's human form was damaged, resulting in him becoming a negative version of Ben. Azmuth then arrived and destroyed Albedo's Omnitrix, trapping him in his human form as punishment and sending him to an alien prison. Blaming Azmuth and Ben for his condition, Albedo swore to get revenge on them.

In The Final Battle, Albedo escaped from prison with the help of Vilgax, and stole the Ultimatrix, an incomplete model of the Omnitrix, from Azmuth. Using pieces from his broken Omnitrix, he successfully completed the Ultimatrix and tried to use it in order to transform back to his Galvan form. However, the Ultimatrix was still linked to Ben's Omnitrix, leaving him trapped in his form. Vilgax then offered him an alliance, promising he would let him get Ben's Omnitrix. Though not really trusting him, Albedo accepted and helped him. Despite the alliance being a success, Vilgax quickly double-crossed Albedo and made him his prisoner, using an army of thousands of Humungousaurs against him which defeated Albedo. After the Omnitrix was destroyed, Ben freed Albedo and forced him to hand over the Ultimatrix by triggering the self-destruct command. Though the ship then crashed into one of Earth's oceans, Albedo had escaped.

When Kevin and Gwen put in the Ultimatrix Security keys for Alien X's transformation in The Forge of Creation, Ben states they did it so Albedo wouldn't get access to it if he took the Ultimatrix back or if there is a duplicate or otherwise, something similar in sync to it.

Albedo returned in Double or Nothing and revealed that ever since Vilgax's ship blew up, Albedo was "broke and stranded" and had created his own live action show, 'Ben 10: Live', where Albedo played the role of Ben, and three of Ben's top most popular aliens, Swampfire, Humungousaur, and Big Chill, are played by three actors in costumes: A Methanosian named Swamps (play on Swampfire), a Vaxasaurian named Hugh (play on Humungousaur), and a Necrofriggian named Fridge (play on Big Chill).

After Albedo sets a soundwave-bomb on the ground, Ben says for Kevin and Gwen to 'deal with the bomb', while he goes after Albedo. Albedo supposedly 'turns into' aliens, which are really just the real aliens replacing him before Ben sees the switch. When Ben battles all three of them, he states to them that he knows they aren't Albedo. After talking to Albedo, telling him to never again do Ben 10: Live, Albedo states that he won't.

They are about to leave, but Hugh comes and lies to the team, saying Albedo was making a bomb that will make everyone on Earth into a copy of Ben. Ben, Gwen, and Kevin go to stop him. Ben is annoyed and uses NRG to blow a hole in the wall. They see Albedo wearing a large Omnitrix symbol on his chest, and Hugh says that it will protect him from the blast. Gwen questions why Albedo would wear it if he already looks like Ben. Ben cuts her off and goes after Albedo, and Kevin and Gwen follow him.

Albedo then yells at the other aliens to get them. NRG defeats Swamps, and Gwen and Kevin defeat Fridge. Then, Hugh comes and tries to defeat NRG, but fails. Ultimate Spidermonkey goes after Albedo, still thinking he was making a bomb that will make everyone on Earth into an exact copy of Ben. While Albedo is working on the "bomb", the whole theater suddenly blows up and Albedo transforms back into his Galvan form.

Albedo revealed that the device he was wearing wasn't a doomsday bomb, but rather, a device to return him to a Galvan as well as making him able to alter his DNA at will. Negative Grey Matter said he wouldn't attack Ben anymore, that is, until he transforms back into human and finds out due to the Ultimatrix interrupting the device's alteration field, he can only be Negative Grey Matter for one second before turning back into his human form.

Hugh tries to take the blame, but Albedo doesn't blame him as Hugh is his friend and instead blames Ben. Albedo transforms into Negative Rath, and battles Echo Echo. When Negative Rath pins Echo Echo down, Echo Echo goes Ultimate Echo Echo and sends sound waves at Negative Rath. This causes Negative Rath to transforms back to human and faint. Hugh said the trio only came to make friends, and that Hugh wanted Ben to stop Albedo so Albedo couldn't leave and would stay as their friend. Ben says that they can have him, but he won't be happy when he wakes up.

Albedo returns again in Night of the Living Nightmare, where he attempts to infect Ben with a Cassiopeian Dream Eater, trapping him into a dream world where he kept being attacked by several of his enemies. Eventually, when Albedo enters the dream posing as Kevin and Gwen in an attempt to take the Ultimatrix, Ben figures out it's him and starts to defeat him.

As Ben starts taking over the dream world, Albedo attempts to put back the Dream Eater, only to slip on a spilled smoothie and accidentally end up being the one infected. In the real world, it was revealed that Ben was never infected with the nightmare-inducing parasite. Albedo attempted to, but was dangerously unprepared for how messy Ben's room was, which resulted in him dropping the bug on his own face when he inadvertently slipped on a spilled smoothie, thus replaying the same thing that happened in Albedo's nightmare. While they call a Galvan doctor in order to properly remove the Dream Eater, Albedo is seen inside the dream world, being confronted by some of the Ultimatrix Aliens and fearfully begs them to not to hurt him as they come near.

Albedo with his new Ultimatrix

Albedo reappeared in the present day in The Ultimate Heist. In it, he has been impersonating Ben for several days, after he and Khyber secretly switched his and Ben's places. Albedo was unable to use his alien transformations, due to the fact that the red eyes would give him away to Ben's allies. Even though his ruse was discovered and Ben escaped, Albedo managed to get what he needed from Inspector 13. The devices that he took would not only stabilize his transformations, allowing him to remain in them for as long as he wants, but allow him to once again access the Ultimate Forms, including his own, Ultimate Albedo.

In A Fistful of Brains, Albedo tricks Ben into entering Khyber's disguised ship, capturing him and taking him to Khyber's private hunting area. Beforehand, Albedo had left toenail clippings and hair on several planets, in order to fool anyone who tried tracking Ben by his DNA.

Ben managed to escape Khyber and confronted Albedo. When Ben pointed out that Albedo had what he wanted, which was the power to return to his true Galvan form, Albedo informed him that he wanted revenge for his humiliation and imprisonment. Ben managed to overcome Ultimate Albedo, only for Ultimate Albedo to declare that Ben hadn't really won. Khyber then revealed that he had captured Azmuth.

In For a Few Brains More, Ultimate Albedo reveals that he intends to use the device he imprisoned Azmuth in, a Cerebral Vortex, to drain Azmuth's intellect, and add it to his brainpower. Despite managing to drain Azmuth's intelligence into an orb form, Ben and company managed to free Azmuth and his intellect; however, after a lengthy battle, which culminated on Earth, Ultimate Albedo managed to escape to Billions Tower, and used its lab to construct another Cerebral Vortex and added Azmuth's intellect to his own, easily subduing them. However, the combined brainpower led to Ultimate Albedo having an epiphany, realizing that destroying them was worthless, as they would still exist somewhere in the omniverse. This distraction allowed Ben to reverse the procedure, taking away Ultimate Albedo's stolen brainpower.

Albedo with the evil Bens

Albedo returned in And Then There Were None, in which he and several other evil Bens join forces with Vilgax and Eon to wipe out every good Ben from the multiverse. However, he along with the other evil Bens was double-crossed by Vilgax and were erased from spacetime by a Chronosapien Time Bomb.

In And Then There Was Ben, he was brought back into existence by No Watch Ben. Later, he was chasing an Omnitrixless Ben Tennyson as Negative Ultimate Echo Echo along with Mad Ben and Bad Ben's Buzzshock. At the end of the episode, he was sent back to the main timeline by Clockwork.

In Malgax Attacks, Albedo and Vilgax infiltrate the Galvan Historical Museum to steal Malware's remains. While Vilgax fights Ben, Albedo attempts to obtain the secrets of Azmuth only to be stopped by Luhley, Blukic, Driba, and Azmuth himself. He uses Ultimate Rath to finish them all off until Azmuth disables the Ultimatrix. Albedo is then sentenced to clean-up for the next "30 Galvan solar cycles", in which he demands sunblock.