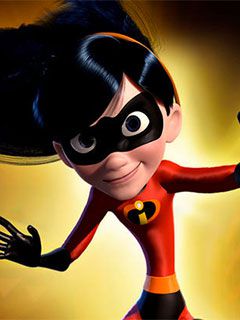 When Violet is first introduced, she is depicted as gloomy, uncertain and socially withdrawn, preferring to hide behind her long raven hair. She has a crush on one of her classmates, Tony Rydinger, but is too shy to approach him and turns herself invisible whenever he looks her way so as to avoid attention.

During a family dinner, her mother Helen a.k.a. Elastigirl asks her how school was, noting that she has barely touched her food, but then Dash teases her about her crush on Tony, which insults Violet. This erupts into a fight, in which Dash runs around the table, hitting Violet, and Violet retaliates by generating her force-field that Dash crashes into. The fight is broken up when a family friend, Lucius Best a.k.a. Frozone, rings the doorbell. After Violet's father Bob a.k.a. Mr. Incredible returns from his night with Lucius, Violet and Dash hear their parents arguing loudly and rush into the scene to investigate. When Bob senses that Dash is in the same room he and Helen are in, he calls for them to come out, and Violet also appears, having turned invisible to listen to their argument without being noticed. Bob then assures the children that he and Helen work as a team, no matter what. Helen apologizes to the children for waking them up before ushering them back to bed. In one of the montages following Bob's return from Nomanisan Island, Violet is seen listening to music and reading a magazine when he comes up to her and gives her a kiss.

When Helen finds out that her husband (who has been doing secret hero work behind his family's back) is in trouble, she decides to go search for him and bring him back home. She places Violet in charge during her absence, but Violet notices super-suits in her mother's bag and asks her about them. Dash, due to his ability to run at super speeds, grabs super-suits for himself and Violet. While examining her suit, Violet discovers that it can turn invisible along with her, rendering her totally unseen, without disrupting her force fields (the force field part is discussed in A Magic Kingdom Adventure (AMKA)). However, Dash runs off after his mother, prompting Violet to go after him, and the two siblings end up stowing away on a plane their mother has borrowed from a friend.

When Helen discovers her children aboard the jet, they argue over who's fault it is, and Helen is shocked that they have left Jack-Jack alone in their house, to which Violet replies that she got someone to take care of the baby. Just then, missiles, sent by Syndrome, close in on the plane, and Helen orders Violet to put a force field around them for protection. However, Violet is reluctant to try to generate such a large force field, and is still too uncertain to successfully carry out the order. Helen is forced to use her powers to turn herself into a ball around her children, shielding them just as the missiles slam into the plane, destroying the aircraft. She grabs them when she sees them falling with her, then turns her body into a parachute to gently land in water.

Seeing contrails left behind by the missiles, Helen decides to head in the direction the missiles came from. She morphs herself into a lifeboat, on which Violet appears to be the only passenger as Dash serves as the outboard motor. Arriving at a shore of Nomanisan Island, they make their camp out in a cave. Helen instructs her children to use their powers should anything goes wrong, but when Violet tries to protest, Helen warns her children that the bad guys they will be facing will be different from those on cartoons as those bad guys are merciless and will kill them if they got a chance. She places Violet in charge again in her absence, promising to return by morning. Before Helen leaves Violet calls for her and apologizes to her for what happened on the plane (and failing to live up to expectations), to which Helen apologizes back to Violet, stating that Helen herself wasn't being fair to suddenly ask so much of Violet. Helen reassures Violet by saying that the latter has more power than she herself realizes, but also warns her that in their situation, doubt is a luxury they can no longer afford.

Her confidence bolstered, Violet practices her power on the fire in the camp, but Dash, out of boredom, decides to look around. Violet tries to talk him out of it, as he thinks they are on a vacation, warning them that their parents' lives—as well as their marriage—could be in danger. Nevertheless, Dash explores deep into the cave, but he comes running back as flames are coming in his direction (The cave Dash and Violet are in is actually a rocket exhaust pipe). Dash grabs Violet, and they narrowly escape the flames, just in time to see a rocket taking off into the night sky. They spend the rest of the night in a jungle, huddling together to keep warm.

The next morning, Dash hears a monitor robot (disguised as a wild bird) asking for identification. He wakes up Violet, who stares curiously at the robotic bird that suddenly triggers a deafening alarm. They run away, with the bird flying after them, and soon they are cornered by three Velocipods patrolled by Syndrome's security guards. She reminds Dash of what their mother has said, telling him to run, which he does, and two of the guards chase after him. Turning invisible to hide herself from the remaining guard and remaining invisible, she attacks him with a large stick. Displaying a high level of ingenuity, the guard uses dirt to find Violet once she has submerged herself in a shallow pond. Just then, Dash returns and stops the soldier from killing Violet, who in return saves him from that soldier by enclosing both herself and Dash in a force-field; both discover that she can float inside her force-field if generated in mid-air. Dash then proceeds to move the force sphere by running along its inside surface, propelling it at considerable speeds and mowing down everything in their path. After destroying a couple more Velocipods, they literally run over their parents. After a brief and joyful reunion, the family works as a super-team for the first time as another wave of henchmen find them and attack them.

During this fight, Violet once again displays her increasing confidence, raising a large shield which protects her family from a hail of automatic weapons fire. Though the guards are quickly overpowered, Syndrome jumps into the scene and immobilizes the family in his zero-point energy. Once the family is imprisoned in his base's containment unit, Violet, while restrained by suspension beams, succeeds in wrapping a force-field around herself and severs her magnetic bonds. At the same time, her father apologizes to everyone for being a lousy father and being so caught up in the past that he missed out on his greatest adventure: his family. Violet has gathered enough momentum to roll towards a nearby control panel. As her father vows to get the family out of the situation no matter what it takes, Violet commends him for making some excellent progress and presses a button on the control panel that frees the family from the suspension beams. The family then makes their way to a hanger in hopes of getting a fast vehicle to head to Metroville. Dash suggests they use a rocket, and Violet suggests that they just need to use the coordinates from the previous launch so they won't have to try to fly it manually. Syndrome's former co-worker Mirage, who has defected from her employer after folding her apparent relationship with him, steps in to help.

After returning to Metroville, the family is faced with Omnidroid 10, which attacks the children, but Violet wraps her force-field around herself and Dash, protecting them from its claws. The Omnidroid then slams its huge bulk onto Violet's force field, dissipating it and knocking Violet unconscious. Just as the kids are about to be crushed, their father steps in and holds up the robot for Helen to reach for the kids and take them to safety. Bob then finds a remote Syndrome has left behind. Violet and Dash notice that "the remote controls the robot." Her involvement in the battle comes after her elastic mother trip-wires the robot, when an invisible Violet gets her hand on the remote while dodging the robot's claws. Dash and Violet fight over the remote, which their mother takes control of, and the family waits as the Omnidroid approaches. Violet refuses Helen's order to hide and remains by her side until the Omnidroid is destroyed when Bob launches its detached claw (which the robot has fired at Bob a little earlier to prevent him from getting his hands on the remote) that penetrates through its bulk and rips out its brainpan.

The Parrs return home, where they are caught again by Syndrome, who has baby Jack Jack in his arms, intending to kidnap him and raise him to be a sidekick. After Jack Jack is rescued by Helen and Syndrome is killed when his cape gets snagged in the turbine of his manta jet, Violet wraps her force-field around the Parrs to protect them from that wreckage of Syndrome's jet that falls onto them and destroys their house.

Three months later, Violet is courageous enough to talk to Tony, who is now the shy one rather than Violet, and they plan to go to the movies on Friday. Violet tells Tony that she will buy the popcorn. In this scene, Violet was seen wearing a pink shirt and khaki pants instead of her typical dark blue clothing. In addition, her recent change in personality was made present by a desire to wear her hair out of her face -- pulled back by a headband. She and her parents cheer for Dash who is participating in track and field and applaud him for finishing in second place. Following Dash's athletic accomplishment, a new super-villain, The Underminer, emerges from underneath the earth. Violet and the rest of the family don their masks and suits, showing their rededication to fighting crime.