List your opinion of the top ten healing factors in comics

30.4K
Okay guys, I re-made my list. Who's ready for the ultimate list?
25. Daken (wolverine style healing factor, not many feats though)
24. Mister Sinister (can regrow from basically nothing, not unkillable level though)
23. Suicide (he's the weakest unkillable)
22. She-Hulk (hulk style healing factor,)
21. Scavenger (better feats than she-hulk)
20. Apocalypse (can control his body's molecules)
19. Skaar (hulk style healing factor)
18. Victor Slaughter (listed as an unkillable, not as powerful as others though)
17. Red Hulk (hulk style healing factor)
16. Night Raven (in theory weaker than Yi Yang)
15. Yi Yang (even age doesn't kill her, and she has good feats)
14. Mortigan Goth (I could argue him above Juggernaut, but overall he's not)
13. Juggernaut (insanely advanced magic healing factor, can anyone give me reasons he's any higher though?)
12. Harry Sikes (Juggernaut isn't immortal, so Harry Sikes is above him)
11. Deadpool (could be above the next two depending on how you measure healing factors)
10. X-23 (changed my mind, Logan's healing factor actually improves with time, I was wrong before)
9. Sabretooth (he used to have a better healing factor than logan, so he's above X-23, but not anymore)
8. Hulk (It's the hulk)
7. Madcap (this guy doesn't even feel pain, and he really can't seem to be killed, he heals from everything)
6. Wolverine (I feel like no explanation is needed)
5. Mr. Immortal (idk why he's not on other lists, he can heal from anything even after he dies, if hulk dies he's dead)
4. Thulsa Doom (goddamn, he's practically unkillable, he heals from anything unless his bones are separated by space and time)
3. Sentry (matter manipulation and molecular manipulation, he would be impossible to kill, and heals almost instantly)
2. Adam Warlock (pretty much all the same things as Sentry, plus Adam Warlock also exists outside of death)
1. Elixir (can't die, has in the past raised 16 million people from the dead instantly)
Last edited: 1 y 5 mo 8 d ago.
show 3 replies

28.6K
Hulk's regeneration is way better than Wolverine's and even Deadpool's at this point. Sentry's is definitely the best on the list though.

30.4K
Sentry should be #1, Hulk should be higher, Deadpool should be lower

1.2M
How do any of the Terminators scale to these lists.
Just wondering.
show 2 replies

30.4K
Well, my list was just marvel, but in comparison I wouldn't put him on the top 25. I have Dracula (marvel) is 25th place, and I would argue dracula has a better healing factor than any of the terminators, but I could be convinced either way.

The T-800 model heal no faster than an ordinary human would (T-850's were slightly faster) however the T-1000 surpasses even Deadpool as it can regrow and later reattach lost body parts where as Deadpool cannot re-join with lost limbs after some time.

Ah the Phoenix. How could anyone forget?

28.6K
@Savage He could regenerate from having his entire body destroyed, but it's also to a degree based off of immortality which is super strong in Ghost Rider's case.

30.4K
@AkhilPDX Plenty of characters can regrow their entire body. It also depends what destroys their body, and to what degree it was destroyed. I explain my reasoning's for characters on my list (the new one).

28.6K
He has type 8 immortality which means he essentially can't die until a certain concept, object, or being is destroyed.

Sabretooth should be above Wolverine and where's Deadpool? Not Juggernaut?

30.4K
@Tyrannus Whoops forgot about deadpool, my bad. I added him.
Nah, Logan's always has a better healing factor than Victor, partially in how much he will actually heal from, but mainly in terms of how fast he heals. It's one of wolverine's only advantages against him.
Wdym not juggernaut?

In all the history of the X-Men, Sabretooth's powers have always been superior to Logan's. Pretty much anything Logan can do, Victor does much better. Wolverine even admits this; 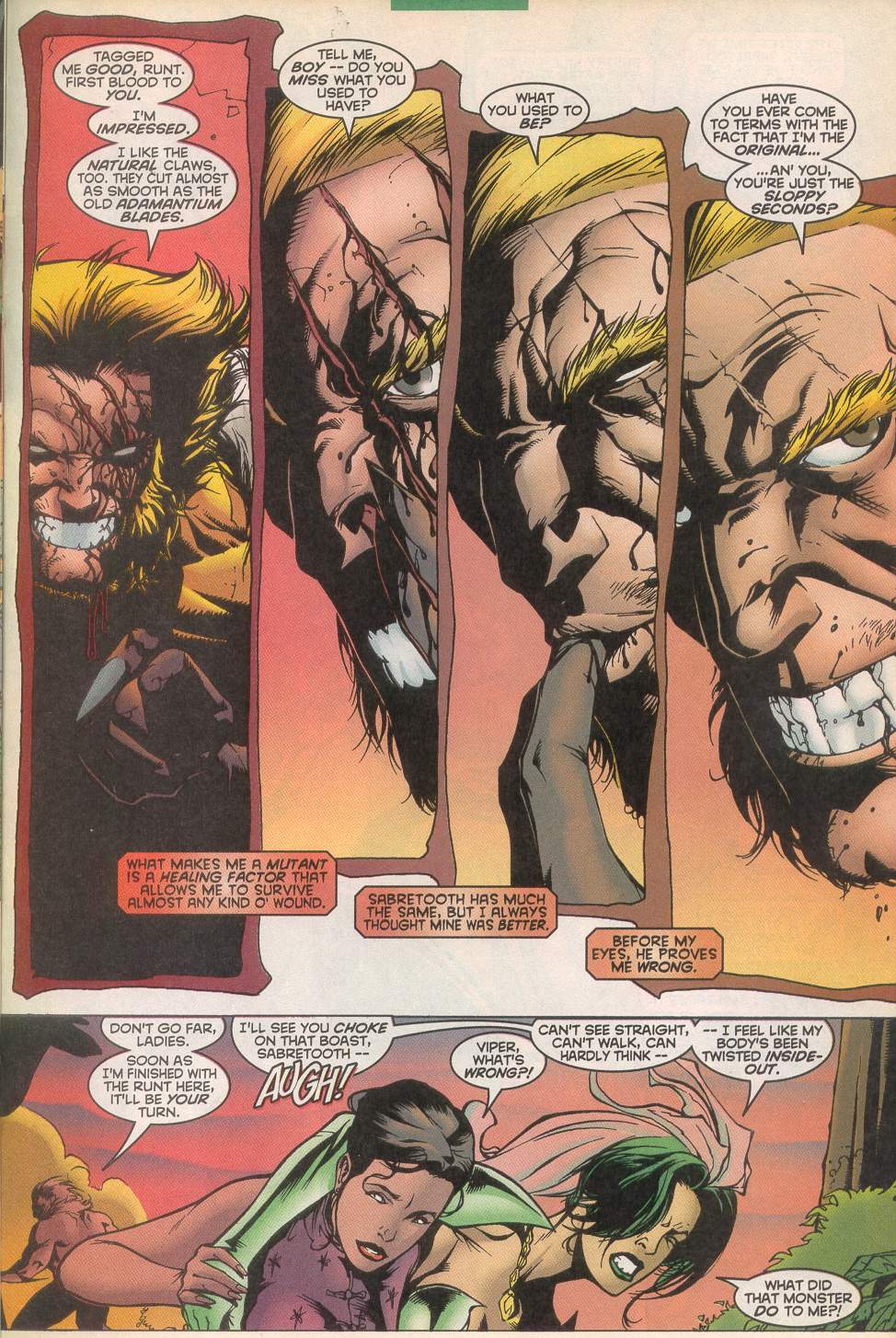 At one point Chris Claremont was even going to make Sabretooth Wolverine's father to explain why Wolverine only has a fraction of Sabretooth's powers.

Juggernaut's backing from the Cytorakk means he'll always heal back to normal from any injury. 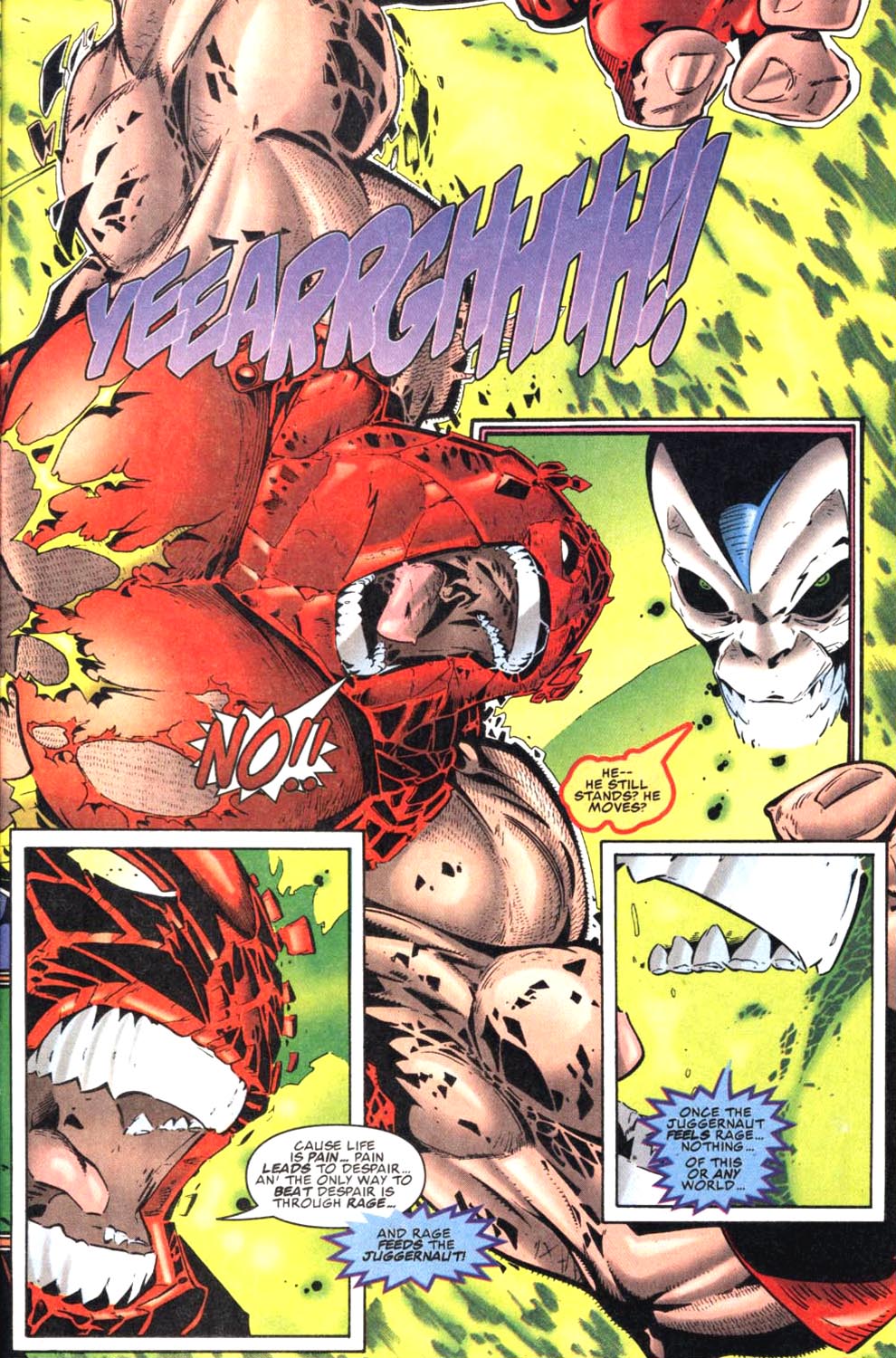 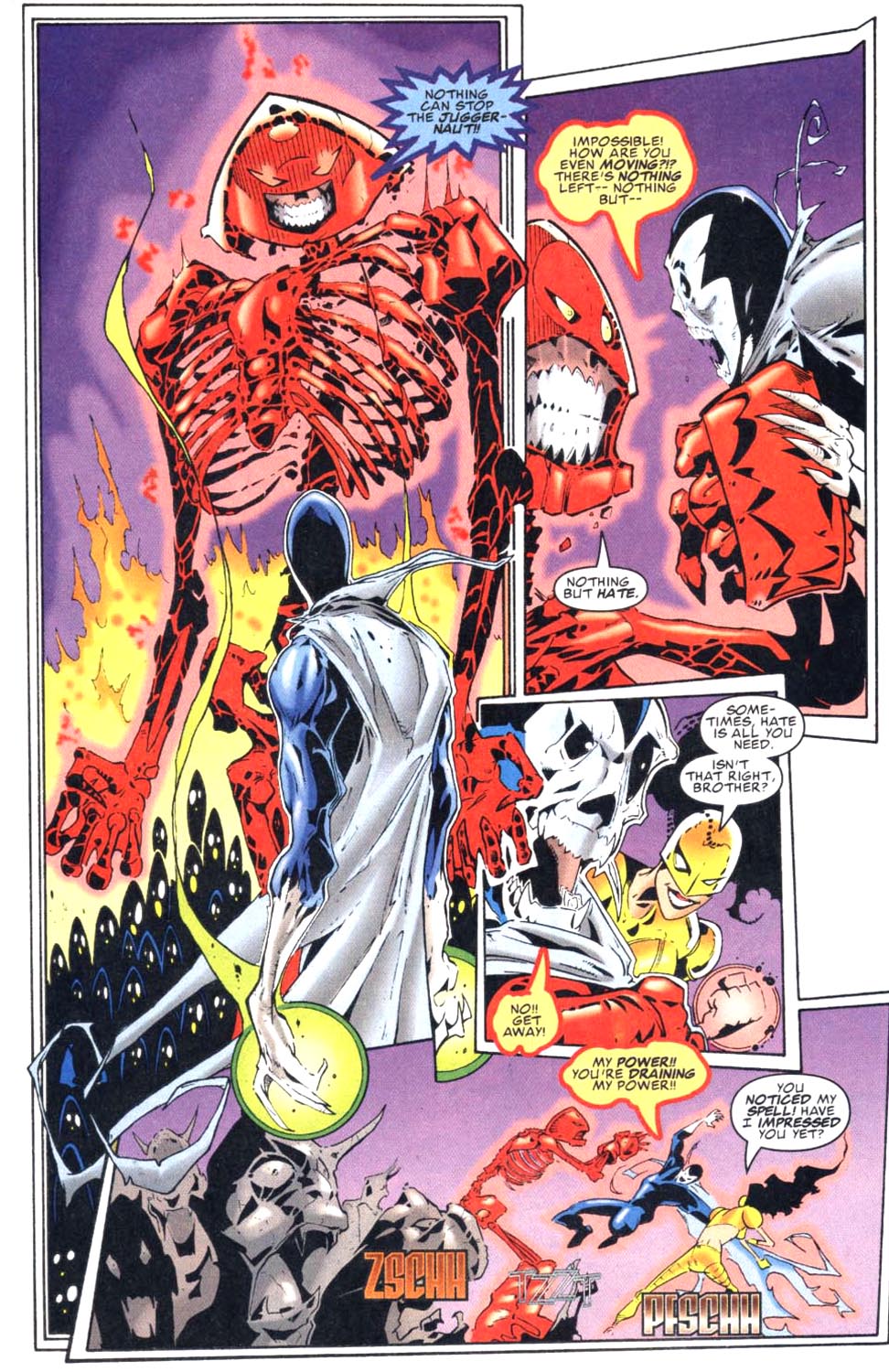 Even Oblivion was unable to wipe Juggernaut from existence. 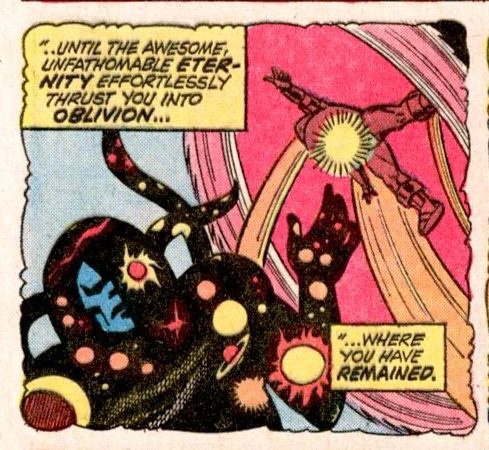 And that's if you can even hurt the Juggernaut in the first place which is a feat in of itself.

30.4K
I've already talked about why I think wolverine could beat sabretooth, and overall wolverine has better healing factor feats.
That's from wolverine #125 or something right?
So you're saying juggernaut should be higher, where would you put him on my list?

And I already explained why its wrong. Sabretooth is just inherently better. Saying Wolverine's better goes against the vast majority of their history.
Its from #126.
I personally put him above Hulk but others have told me I'm wrong. It depends; Juggernaut's backing from the Cytorrak means that he will always return back to normal however Hulk has better healing feats. Both are backed by powerful sources (TOBA and Cytorakk).

30.4K
Sabretooth has many advantages over wolverine, but his healing factor isn't one of them.
Juggernaut doesn't have as many feats as other characters, I could maybe see myself placing him above Apocalypse and Skaar, but I doubt I'll put him above deadpool. Depending on how one measures healing factors, the list could change. If juggernaut was decapitated, I definitely don't think he would heal faster than deadpool. Juggernaut is also extremely physically durable, so it's hard to tell how good his pure healing factor is.

Based on what? Chris Claremont gave Sabretooth better healing to compensate for Wolverine had the adamantium advantage. Wolverine himself admitted he's better. Why do you not want to accept Sabretooth is better?
Juggernaut's difficult to say.
Last edited: 1 y 7 mo 8 d ago.

30.4K
With pure healing factor wolverine has better feats, although depending on how we measure healing factor it would change. In wolverine #126 I agree with Logan, if anyone can kill sabretooth, it's him. It would be difficult, but he could. (Yes, I know sabretooth beat him the hell up right after he says that)

Yeah, Juggernaut just doesn't have many healing feats, since it's pretty hard to injure him badly.

But that's not the case at all because its always been established that Sabretooth's healing is better. And that's not what Wolverine said. He said he thought he was better but its Sabretooth who's better. Like what more proof do you need?

30.4K
Again, wolverine has better feats, and to be honest I don't know why wolverine thought sabretooth had the better healing factor, except that he may heal faster

I don't know why you keep saying that when the opposite is true. Wolverine said that because he wasn't healing as quickly as Sabretooth was. If you don't want to believe Logan then believe the writer and creator for a lot of these X-Men. He established that Sabretooth is superior in every way that matters. I really have no idea what made you think Logan's better when even Logan knows he's not.

He keep saying that but I've already shown that's not true at all. If you believe Sabretooth can heal faster than that's pretty much what a better healing factor is. On top of that Sabretooth can do things Wolverine can't, like reattaching limbs

Where as Wolverine's skin will heal around severed limbs rather than allow it to be reattached. This was because the adamantium poisoning affected him more.
Sabretooth has always been seen as a Wolverine on steroids. In everything that matters, Sabretooth has the advantage.
Last edited: 1 y 7 mo 5 d ago.

30.4K
That's not a fair comparison
First off, that's not 616 Logan
Second, Wolverine can heal from way worse than what sabretooth heals from there, the man can walk through hell lava as a skeleton

What about Martian Manhunter?

30.4K
I agree with the ranking, though none of those make my top 3

boros had gem inside when destroyed boros died

13.9K
I think Death Seed Sentry should be up here.
show 3 replies

He doesn't have true healing it's just molecular reconstruction.

14.3K
Molecular reconstruction doesn't give you a working brain after you just tore you own skull in half literally just to prove you can do it.

When did you "literally " just do that?

4K
Flash doesn't have a healing factor he has accelerated healing

205K
Basically the same thing, but okay. How about kick him out and replace him with Mr. Sinister.

611
Tom and Jerry should be the first, there healing ability is instant

It's mainly because of Toon Force.

205K
Which is why they're only an honorable mention.

205K
Wait a sec, I think everyone forgot about Mr. Immortal. Should he be on here?

30.4K
I'm glad someone else thought about Mr. Immortal

18K
Superman should be up there, he has healed when being drained of his life energy by the concept of death itself

1. Doomsday - Only one that comes back stronger.
2. Sentry - Has matter manipulation.
3. Juggernaut - Has the best pure healing factor.
4. Lobo - Can heal from a drop of blood
5. Hulk - Can be dismembered and still instantly heal over.
6. Flash - Heals in a flash
7. Apocalypse - Can control the molecular structure of his own body
8. Deadpool - Needs no explanation
9. Sabretooth - Slightly weaker than Deadpool's because of the adamantium poisoning.
10. Solomon Grundy - Zombie that grows back
show 8 replies

4.3K
Lmfao How JUGG and lobo have better healing than the hulk wtf is this :'''

4.3K
Doomsday take a lot of time of healing him self and back from death , Hulk can heal at the same time And he literally Became stronger

@Breaker Yes mate! Your back. I was trying to be a bit more harsher to Hulk because I've been called biased to Hulk before.

@Alien_X Yeah. I always put bias aside when I make my answers but I still get called biased. I should just do what I feel is right

@Breaker Try and stick around. We need you

Lobo's healing is good but it's not that good. Doomsday is probably the best because everyone else just heals back to the way they were but Doomsday is the only one who heals back stronger. Also Sabretooth has always had a slightly better healing factor. He doesn't have as much adamantium and he's always been more in tune with his powers.

12.3K
Lobo creates duplicates of himself from a drop of blood that's the best healing factor I've ever seen

30.4K
Where would you rank any of the people on my list?