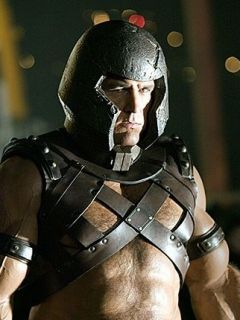 ﻿Juggernaut was recruited into the Brotherhood by Magneto after being freed from imprisonment by US Forces. Multiple Man and Mystique were alongside him. Because of his immense strength, Juggernaut immediately became one of Magneto's trusted generals. When Magneto attempted to recruit Jean at her family home, Wolverine and Storm were left outside to face Juggernaut, Callisto, Quill and Arclight. Soon, Wolverine and Juggernaut engaged in a fight, with the latter emerging victorious (the Extended Cut of the fight revealed Wolverine as the victor, with the help of Storm). During the battle of Alcatraz, Juggernaut was sent to kill Leech - the source for the mutant "cure". Shadowcat, meanwhile, went to stop him. He knocked himself out by colliding with a wall in an attempt to kill Shadowcat and Leech - the latter negating his power of irresistible force. It is been brought to say that Juggernaut survived Phoenix's destruction of Alcatraz Island, but unknown if left whether using the cure or not. Juggernaut was a prisoner at The Ice Box prison, held in a secure section of the facility. In the aftermath of Cable's assault on the prison, Russell Collins befriended the Juggernaut by sharing food with him. Because of Cable's attack on the prison, all prisoners were scheduled for transport to another installation. Deadpool organizes a team of mutants to fight Cable and save Russell, whom he calls X-Force. The team launches their assault on the prison truck transporting Russell by leaping from a plane and parachuting in, but all members other than Wilson and Domino die in the landing. During the battle, Russell frees the Juggernaut, who destroys the truck and escapes with Russell. Cable decides to team up with Deadpool and they plan to stop Russell from killing the orphanage's abusive headmaster, an act which sets Russell down his murderous path. Wilson, Cable, and Domino arrive at the orphanage to stop Russell and the Juggernaut but face difficulty fighting the latter, who proves too powerful for them. Colossus arrives and distracts the Juggernaut long enough for Cable and Wilson to catch up with Russell. Colossus, Negasonic Teenage Warhead, and Yukio managed to defeat the Juggernaut. With Yukio using her chain to restrain him, Colossus shoving a power cable up his anus and then Negasonic using her power to knock him into the pool electrocuting him. He survived as he can be seen climbing out of the bath before the credits.