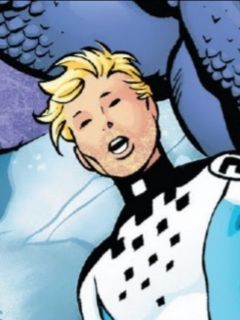 Alex Power was the oldest child of Dr. James Power, a physicist who worked for the United States government on a means of producing large quantities of energies cheaply through combining matter and anti-matter. (The subatomic particles composing anti-matter have opposite charges to those of the equivalent particles of matter itself. When matter contacts anti-matter, both are converted entirely into vast quantities of energies.)

An alien Kymellian named Aelfyre Whitemane (nicknamed "Whitey") learned of Power's discovery and intended to stop it. Whitemane knew that a device such as Power's would, despite Power's good intentions, trigger a chain reaction that would destroy the Earth. Moreover, he knew that Power's device was sought by alien Z^nrx, nicknamed "Snarks," who intended to use it to conquer inhabited worlds.

When Snarks captured Dr. Power and his wife Margaret, intending to force him to reveal the secret of his device, Whitemane saved the Powers' children, Alex, Julie, Jack, and Katie, from being captured, but he himself was fatally wounded in the process. Dying, Whitemane transferred one of his superhuman powers into each of the four Power children, and asked them to use their new abilities to save their world.

Alex received the power to control gravity, and called himself Gee after the common scientific abbreviation for gravitational force ("G"). The four children called themselves the Power Pack. Power Pack thwarted the Snarks, rescued their parents, and destroyed Dr. Power's dangerous matter/anti-matter converter, thereby saving the Earth from destruction. The four children continued to have adventures as Power Pack, assisted by Whitey's Kymellian Smartship, Friday.

Some time later, Alex was contacted to help save the New Warriors from the Sphinx. For this adventure he was convinced to absorb the powers of his siblings and help the Warriors as Powerpax. After the adventure, he returned his siblings powers and promised not to steal them again. But soon after the Warriors needed his help again, and he broke his promise.

This time, however, he realized how dangerous it was for children to be super-heroes, and decided not to give his siblings their powers back, to his family's chagrin. Instead, Alex continued with the New Warriors, changing his code-name to Powerhouse out of guilt over the fate of Power Pack.

He shared many adventures with the Warriors, but after the team allowed the Smartship Friday to be severely damaged to stop Volx, he quit the Warriors and gave his family their powers back. Retaining the gravity-control power, Alex renamed himself Zero-G and returned to adventuring with his brother and sisters.

After a time, Alex and his siblings seemed to stop functioning as a team, most likely due to Lightspeed quitting and moving to California.

After the Civil War, Zero-G was a recruit for the Initiative.

He was invited by Reed Richards to join a think tank that would be based out of the Baxter Building and comprised of young geniuses. Although Alex was not the smartest of the team, he became a valued member.

At some point, Zero-G briefly rejoined the Power Pack and teamed-up with Devil Dinosaur, Gwenpool, and Moon Girl.
Superhero Class