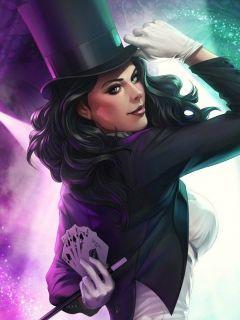 Zatanna is the daughter of adventurer John Zatara and his wife Sindella, a member of the mystic tribe of sorcerers called the Hidden Ones, or Homo Magi. Zatanna inherited her mother's ability to manipulate magic and her father's penchant for heroism. Sindella later faked her own death to return the Hidden One's sanctum in Turkey, leaving her daughter in John Zatara's care.

Zatara travelled the world with his daughter and taught her to harness her magical abilities. Zatanna was later raised by strangers, however, when the evil witch Allura cursed Zatanna and prevented her from seeing her father. Zatanna was left to search fruitlessly for her natural parents.

Zatanna discovered her father's diary and created a stage persona for herself. Her quest to find her father led her into a brief affair with John Constantine. Later, with the help of the Justice League Of America, Zatanna was able to lift Allura's curse and reunite with her father and later her mother. Tragically, Sindella died rescuing her daughter from the city of the Hidden Ones, while her father died saving her and the spiritual dimensions from the Great Evil Beast.

As a long standing member of the Justice League of America, Zatanna fought countless super-villains and mystic threats. After the death of her father, however, she retired from active adventuring. She now lives in San Francisco, seeking a normal life while trying to preserve the balance of Earth's light and dark mystical community. In this role she serves as one of the Sentinels of Magic.