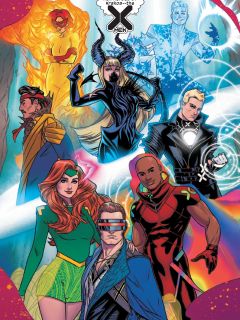 When Professor X, with the assistance of Magneto and Moira, established a mutant nation on Krakoa, the X-Men disbanded, as they were believed to no longer be needed. However, they ultimately reformed when Cyclops and Jean Grey gathered an army of mutants to rescue the Swordbearers of Krakoa during the Krakoa-Arakko War in Otherworld. After this event, Cyclops and Jean Grey decided to permanently recreate the team as opposed to accepting positions on the Quiet Council of Krakoa, since they felt that Krakoa needed heroes working in their best interests, representing and fighting for mutantkind. To recreate the X-Men, they decided to call for elections.

At the Hellfire Gala, Cyclops and Jean Grey announced the members of the Krakoan X-Men. Adopting a telepathic voting system, the new X-Men line-up was elected by mutantkind, and led by Jean Grey and Cyclops, was revealed to the world: Rogue, Sunfire, Wolverine (Laura Kinney), Synch and Polaris. Emma Frost purchased and ceded an estate in Central Park 86th Street Transverse to serve as the X-Men's new headquarters, which was redesigned as the Seneca Gardens public park to celebrate and remember mutant accomplishments and losses. In the middle of it, Krakoa, Forge, Tempo and Cypher created a techno-organic Treehouse as the main private base for the team to operate in. Unlike other Krakoan habitats, the Seneca Gardens area was open to humans.

The new team intercepted and fought off two alien attacks: one by the Mind Reaver in Manhattan and the other by the Annihilation Wave in Kansas. After combating an attack by the High Evolutionary in Vietnam, the X-Men learned that the alien attacks were the work of the intergalactic crime-lord Cordyceps Jones, who had been running bets on who could destroy the Earth first on his casino, Gameworld. The attacks of both Cordyceps Jones and the High Evolutionary were a response to mutantkind terraforming Mars during the Hellfire Gala, reforming it as Planet Arakko. After Synch provided the High Evolutionary with a drop of his blood in exchange for calling off his attack, Cyclops and Jean Grey planned an attack on Gameworld. Rogue and her husband Gambit travelled to the gambling planet to investigate only to be met by Destiny, who alerted them the X-Men would find no answers there.

The birth of Planet Arakko also enraged the human wealthy genius Feilong, who joined and started funding the anti-mutant organization known as Orchis since he had invested his resources to terraform Mars and adapt his body to it but was outperformed by the mutant activities. After colonizing Phobos for Orchis, Feilong was welcomed by the X-Man Sunfire, who asked him to leave the Arakki territory. Feilong refused and managed to consolidate his control, attracting the attention of Isca the Unbeaten of the Great Ring of Arakko. Later, on Planet Arakko, Sunfire was contacted by Great Ring member Storm, who asked for his help to retrieve Redroot from Otherworld.

The X-Men also dealt with humans interested not only in Planet Arakko, but also in the Krakoan Resurrection Protocols, namely Daily Bugler reporter Ben Urich and a mad scientist associated with Orchis, Doctor Stasis. With many well-known deceased mutants being seen alive and well, Urich approached and investigated the X-Men for explanations. Meanwhile, when Doctor Strange was put out of commission, his enemy Nightmare took advantage of the situation to attack the city by tormenting their dreams. By attacking the X-Men, Nightmare was counter-attacked by Jean Grey, who efficiently stopped him and freed New Yorkers from his influence.

In their activities, the X-Men went on missions all over the world to help fight criminals, such as preventing the Reavers from influencing Mexican politics. They attracked the attention of Doctor Stasis, who directly attacked the group with his bizarre chimeric creations. Doctor Stasis managed to assassinate Cyclops in a very public ordeal in one of his attacks, forcing Cyclops to adopt the identity of Captain Krakoa after being resurrected. This decision was made by the Quiet Council as a way not to reveal the secrets of the Krakoan resurrections, much to Cyclops' discontentment which disrupted the X-Men's relationship with the Quiet Council even further. Later, when secretly contacting Urich, Cyclops learned the reporter had his memories about his investigations erased. After the X-Men saved a cruising ship from being hijacked by M.O.D.O.K. and A.I.M., Cyclops learned that Synch was responsible for tampering with Urich's memories with the intention of protecting mutants.

When the former Kingpin of crime and mayor of New York City Wilson Fisk ruled that independent costumed vigilantes should cease their operations, his Thunderbolts sieged Seneca Gardens. The X-Men resisted, leading to a brief conflict with the Thunderbolts. However, as an effect of legal actions carried out by Emma Frost and Krakoan Ambassador Harry Leland, the Treehouse officially became a consulate of Krakoa for the United Nations and the Thunderbolts and Fisk were forced to let the X-Men stay.