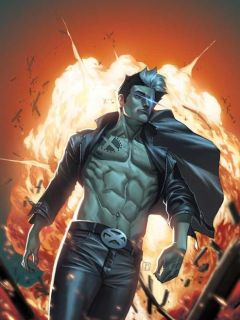 Nate Grey hailed from the timeline in which the eternal mutant Apocalypse had conquered North America. Created by Apocalypse’s Horseman Sinister from genetic material taken from the mutant heroes Cyclops and Jean Grey of his reality, Nate ultimately learned that his purpose was to destroy Apocalypse. After the death of his surrogate father Forge, Nate traveled to Apocalypse’s Citadel and battled Holocaust, another of Apocalypse’s Horsemen. In an attempt to breach Holocaust’s armor, Nate stabbed him with a shard of the M’Krann Crystal, causing them both to be transported to the Earth-616, the mainstream reality.

Nate’s subconscious need for companionship created a physical body for the Red Queen of Earth-998, posing as the dissipated essence of Madelyne Pryor, the deceased clone of Jean Grey. Nate and Madelyne became fast friends, journeying through Europe until Pryor left to join the newly reformed Hellfire Club. Nate subsequently encountered the evil Dark Beast, a fellow refugee from his own time, who informed Nate that his vast powers were burning out his young body and that he would die before he turned 21.

After this revelation, Professor Charles Xavier, the telepathic founder of the X-Men, probed Nate’s mind. Sensing the evil in Xavier that would eventually become the powerful psionic entity Onslaught, Nate lashed out with his powers and pulled Xavier’s psyche from the astral plane. This incident allowed Onslaught to escape Xavier’s mind, and it captured Nate, Xavier, and Franklin Richards, the mutant son of Reed and Sue Richards of the world-famous Fantastic Four. Onslaught intended to use Nate’s power to fuel his plans to turn the human race into a collective consciousness, but was defeated by the combined might of America’s costumed champions. Eventually, Nate realized the full extent of his powers and became a modern-day mutant shaman. To save humanity from destruction by an alien Harvester, Nate sacrificed himself to merge his energies with the alien’s and, through the conduit it had forged with the world, into every being on the planet, thus rendering the world’s energy useless to the Harvester’s race.