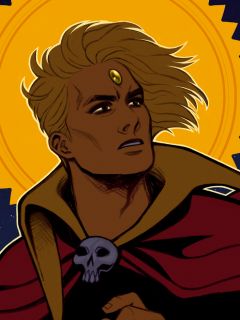 Adam Warlock is an artificially created human who was born in a cocoon at a scientific complex called The Beehive. The goal of his creators, the Enclave, was to create and subsequently exploit the perfect human. While in the cocoon, he became aware of his creators' plans for him. He awoke from the cocoon and rebelled. Having not had a childhood or parents, Warlock was lacking in maturity and restraint. He first met Alicia Masters, who was brought to the Beehive to sculpt his face, as he initially radiated so much light that a sighted person could not see through. She found him encased in a cocoon, from which he shortly emerged, destroying his creators that he hated so much, and teleported away. Warlock later came into conflict with the Fantastic Four and Thor; during his encounter with Odinson, he was killed when he attempted to force Thor's sometime paramour Sif to become his mate.

Adam was revived and his behavior improved when he met the being known as the High Evolutionary. Under his guidance, Warlock's life was given direction and purpose. Warlock also came into possession of the Soul Gem. The Soul Gem, one of the Infinity Gems, allowed Warlock to sense the souls of others and draw them into a dimension contained within the gem.

Warlock was then transported to Counter-Earth, an attempt by the High Evolutionary to create a Utopian society out of the framework of the original Earth. Unfortunately, it had fallen under the influence of the Man-Beast, a wolf that had been genetically modified into humanoid form by the High Evolutionary. In the process of ending the Man-Beast's regime, Warlock's narcissism led him to another death, this time by crucifixion. Warlock used his powers to resurrect himself. Warlock, in recreating the resurrection of Christ on Counter earth, lead to the creation of an organized religion planet wide; this also was the first step toward Warlock’s "God Complex".