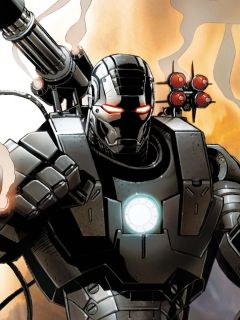 Superhuman Strength: He is capable of lifting between 85-100 tons when wearing his armor.

Even when not traveling for extended distances, the armor enables the wearer to move and react at high speeds.

His armor is very durable, capable of withstanding tremendous amounts of punishment. It can withstand high caliber bullets with ease. He can also withstand rockets, torpedoes, and such, although he does take damage.

The armor can fly and travel at supersonic speeds.

The armor is powered by a combination of solar converters, electrical batteries and an on-board generator that uses beta particle absorption as a fuel source.

The armor is also able to convert nearby energy sources, such as heat or kinetic energy into electricity, or even drain electrical energy directly into the batteries for recharge.

The armor can be completely sealed for operations in vacuum or underwater, providing its own life support, and is shielded against radiation.

The armor can fire particle beams from either or both the palm gauntlets which can repel physical and energy-based attacks, traveling as a single stream or as a wide-field dispersal.

A powerful searchlight capable of projecting beams in virtually every light spectrum.

The Iron Man 2.0 armor has the ability to phase through solid objects. The only limit is that it cannot use its weapons while phased.

The Iron Man 2.0 armor has the ability to become invisible. The only limit is that it cannot use its weapons while invisible.

Rhodes served several tours in Southeast Asia, studying while in the service to become an aviation engineer.

He is a skilled helicopter pilot and is capable of maneuvering most if not all Stark-designed armors.

Rhodes military training made him a very skilled hand to hand combat.

Aside from his armor's weaponry, he is a very good marksman.