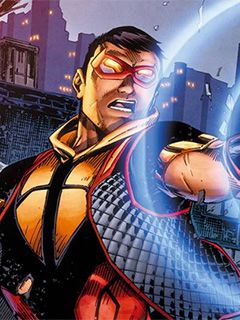 Francisco "Cisco" Ramon was the youngest of three brothers, during a game between the brothers, Cisco stepped into a boom tube created by Darkseid. Without thinking, his oldest brother, Armando pulled his brother out of the boom tube at the cost of his own life making him the first civilian killed by the Darkseid invasion while their middle brother, Dante couldn't help but watch. The process left Cisco's body alter allowing him to create not only seismic vibrations but also to be able to sense beings from other dimensions, even as small as an insect. He kept his powers a secret over the next five years helping people as he could. Thanks to his powers there wasn't any type of recording device digital or photographic that could capture his face or identity. He was eventually followed by a member of A.R.G.U.S., Agent Dale Gunn under the orders of Amanda Waller, who offered him the chance to kill the same Parademon that took his brother's life. Although he kills it and agrees to cooperate as to becoming Vibe and a founding member of the Justice League of America, it is later revealed neither Gunn nor his superior were sure of whether this Parademon was the same Parademon that attacked and killed Armando Ramon. He later begins to question his role after a fight with Kid Flash.

Although a young and relatively inexperienced hero, Vibe and the rest of the Justice League at the time (which was mostly filled with similarly inexperienced characters) did manage to gain a degree of respectability in defeating certain supervillains, including the Cadre and Despero. However Vibe was not with the Justice League of America long before he was killed by one of Professor Ivo's androids, becoming the first Justice League member to be killed in battle. Paco had left behind many extended family members, along with a little brother by the name of Armando with similar powers who goes by the names Reverb and Hardline , even working for Booster Gold 's onetime super team the Conglomerate.

He was resurrected as a Black Lantern in James Robinson's JLA Blackest Night story arc.

Cisco was approached by Dale Gunn who took him to the location of a Parademon and told him it was the same one that had killed his brother. In a fit of rage, he blew up the house the Parademon was in and accidentally killed it. Agent Gunn later convinced him to take the role of Vibe and a founding member of the Justice League of America to fight Barry Allen if the team ever needed to take on the Justice League.

Vibe was later sent to battle Bart Allen as training for his expected battle with Barry Allen. He was briefly able to deprive Bart of his connection to the Speed Force, showing that he would actually be able to effect Flash if they fought. After noticing Bart wasn't as bad as he'd expected Cisco began to doubt the role he played with A.R.G.U.S.

On his third mission, Vibe was sent in after Gypsy. Gypsy was able to use her powers to convince the other A.R.G.U.S members that she was Batman and that Superman was dealing with Gypsy inside a building. Vibe however, saw through her illusion and attacked her. After, Amanda Waller ordered A.R.G.U.S soldier's to fire at will on Gypsy after she'd already been surrounded. Vibe attacked them. In retaliation, Waller ordered the Suicide Squad to capture him and Gypsy. Gypsy turned herself and Vibe invisible in attempt to escape from them, however, Deadshot had been informed of this ability and turned his lens to a specific spectrum that allowed him to see them and shoot Gypsy in the shoulder. Cisco blasted Deadshot and Harley Quinn and in attempt to stop King Shark from eating Gypsy. Vibe was attacked by Crowbar who had been specifically assigned by Amanda Waller. However, Vibe used so much energy against him that his crowbar couldn't contain it and he disappeared. Due to the amount of energy he used, Cisco was weakened and easily knocked out by Deadshot. He was then put in The Circus. Like a savage.

Dante, Cisco's older brother, alongside Agent Gunn, was able to enter A.R.G.U.S and break Vibe out. However, before they could escape Dante was shot in the back. In retaliation Vibe released all the other prisoners in The Circus. His energy eventually broke the walls of reality allowing Rupture to enter their dimension. A battle ensued between Rupture and Vibe. Rupture is revealed to be Vibe's dead brother Armando. Gypsy revealed how Hardline, also known as Rupture, was known by her people. Rupture then took Vibe and Gypsy back to Gypsy's dimension.