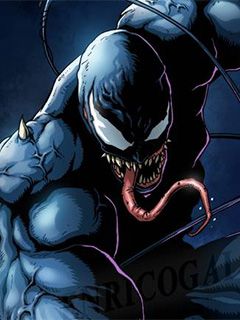 The symbiotes were a conquering race who had no feelings unto themselves. They fed off the emotions of those they conquered and forced them to do spectacular feats in order to feel the adrenaline rush. Eventually, the beings would be sucked dry and left for dead. One symbiote was placed in a prison and condemned to death by disintegration when it was discovered that he focused more on bonding and communicating then on dominating.

When the Beyonder created Battleworld, the crime fighter known as Spider-Man released the symbiote when his familiar red-and-blue one was ripped into tatters, believing it to be an alien clothing generator. When Spider-Man grabbed the little black ball, it instantly slithered over his body, covering him from head to toe. But it did not pattern itself after his red-and-blue costume. Rather, it took on the appearance of the garment worn by the new superhuman adventurer on Battleworld Spider-Woman, whom Spider-Man had been admiring. The web spinner was amazed at the properties of his new suit, but never questioned the mechanisms behind them. For instance, it could mimic any type of clothing whatsoever, making Spider-Man’s need for spare clothing obsolete. It also contained a "dimensional aperture" where he could place his camera, spare change, and other items without adding to the bulk of the costume. The costume was also equipped with its own web-shooter and seemingly contained an unlimited supply of webbing.

Once Spider-Man returned to Earth, the alien costume could not tolerate being separated from its host for long periods of time. At night, when Spider-Man’s alter ego, Peter Parker, slept, the symbiote would engulf him and send the somnambulator to battle evil. Later, Spider-Man battled the Puma, who perceived that the wall-crawler’s webs were organic. Startled by this revelation, Spider-Man accepted Reed Richards’ offer to study the costume. Richards learned that the costume was actually a living alien symbiote, a parasite trying to graft itself permanently to Spider-Man both mentally and physically. Richards succeeded in separating the alien costume from its host by shooting it with a "sonic blaster." He then contained the being in a special environmental cell. But the alien was much more intelligent than anyone perceived. It escaped from its cell and made its way to Peter Parker’s closet where it waited, disguised as a spare red-and-blue costume.

Spider Man unwittingly donned the costume, which immediately made itself apparent. He brought it to the tower at Our Lady of Saints Church gambling the intense sound of its bells would destroy it. Spider-Man lost the gamble, and he succumbed to the bells before the costume did. However, the empathic parasite had preyed upon the emotions of Spider-Man long enough to learn how to feel, and in feeling, to act. Sacrificing itself, the alien costume saved Spider-Man, who assumed it then, crawled away to die. Actually, the symbiote, weak and dying, slithered down into the church where Eddie Brock kneeled in prayer at the altar. Raised a Catholic, he begged forgiveness for the suicide he was contemplating.

Brock had been a successful columnist for the newly revived Daily Globe until he began writing a series of articles about the "Sin-Eater murders". A bogus offender had confessed to Brock about committing the murders. While protecting the "murderer’s" identity under the First Amendment, Brock wrote a series of stories in the Globe detailing his dialogue with the supposed killer, until mounting pressure from the authorities forced him to write an exclusive revealing the murderer's name. Although that edition of the paper sold out immediately, Spider-Man soon revealed the true identity of the Sin-Eater to be Detective Stan Carter, making Brock a laughingstock among his fellow journalists. Fired from the Daily Globe, he was forced to write venomous drivel for scandal newspapers. Brock's wife left him, and his future appeared to be over. Brock blamed his predicament on Spider-Man.

Soon after, Brock began an intense physical workout program hoping to reduce the stress his life had become. However, such physical exertions only increased his violent obsession with Spider-Man. Although his body had been honed to near-perfection, Brock’s mind was reduced to an all-consuming vessel of hatred. It was this fierce emotion that attracted the empathic parasite. In order to survive, the alien costume had to feed off the nearest and greatest source of emotion. The symbiote joined mentally and physically with Brock, whose emotions overwhelmed the already confused alien. The dominant thought on both their minds was that of Spider-Man. But Brock’s sheer hatred for the crime fighter twisted the symbiote’s feelings to a similar extent. In effect, Brock’s emotions drove the symbiote insane, just as their bonding may have driven Brock over the edge. Brock soon discovered that the costume gave him all the powers of Spider-Man, and more. It also added bulk to his already large frame and increased his strength to superhuman levels. Calling himself "Venom," Brock directed the costume to sprout a hideous grin and plotted his revenge. Through the costume, Venom learned a great deal about Spider-Man, including his secret identity.

Brock taunted Peter Parker with minor assaults, such as pushing him in front of a moving subway train. The alien costume could cancel out the wall-crawler’s spider-sense presumably by projecting conflicting frequencies upon Spider-Man's brain waves. Venom finally made a bold move when he confronted Parker’s wife, Mary Jane, at their old Chelsea apartment. Although Venom’s twisted sense of morality did not allow him to physically harm Mary Jane, Spider-Man immediately realized the nature of this threat. Taking the time to retrieve the sonic blaster from the Fantastic Four, Spider-Man challenged Venom at Our Lady of Saints Church. Although he fired the blaster at Venom, Spider-Man soon discovered that the symbiote could not be separated from Brock because it had completely bonded with him. Trying to escape and rethink his options, Spider-Man was caught unawares by Venom. He captured Spider-Man and secured him to the inside of the church bell with a considerable amount of webbing. Spider-Man narrowly escaped the bell’s crushing clapper before defeating Venom by forcing him to deplete his webbing supply, of which the alien symbiote was actually comprised. Before the alien could regenerate enough of its mass to become a renewed threat, Spider-Man brought Venom to the Fantastic Four who imprisoned him in a sonic containment cell. The Fantastic Four then shipped Venom to the government super-prison in the Colorado Rockies called the Vault. A young guard who had just been assigned to the Vault was fooled into thinking that Venom was a fallen colleague and released the gate mechanism, which imprisoned the criminal. Venom killed the naďve guard and escaped to New York City, where he once again confronted Spider-Man. This time Spider-Man used psychological warfare upon Venom, by taunting the alien symbiote to return to him. The alien, torn by its love-hate relationship for Spider-Man, tried to leave Brock and to re-establish its link with its original owner. But the trauma of trying to detach itself from Brock’s nervous system was too much to bear. The alien costume and Eddie Brock were both knocked unconscious and were subsequently returned to the Vault, where they were incarcerated. Since then, Venom has gone through many changes. After years of combating, Venom reached an understanding with Spider-Man.

After dealing a truce with Spider-Man and relocating to San Francisco, Venom was recruited via an ultimatum by the government to be a special operations counter-terrorist agent. Venom agreed, but one stipulation of the deal did not sit too well with him. A bomb was planted in his chest to assure complete and utter obedience. After a few missions, Venom became tired of the situation and had the symbiote perform surgery on him and extracted the bomb. A brouhaha ensued wherein the end result was Eddie Brock lying unconscious and the symbiote "dead," only to return later on and re-join with Eddie. Thus Venom was whole again and looking to square things with Spider-Man once again. He had lost his memory and no longer knew the secret identity of Spider-Man, but knew that a deep seated hatred resided within him for the Web-Head.

Shortly after the reunion, Venom joined the Sinister Six for a brief period in order to get at Spider-Man. After being scorned by the group, he hunted down certain members of the team for revenge (including Electro, Sandman, and Kraven).Later Eddie Brock approached his ex-wife Anne Weying, and at the thought of having the symbiote back in her life, she jumped out of her apartment window and killed herself. Venom blamed Spider-Man, whom he had a skirmish with right before Anne died. Thus the hatred for the old Web-Head was fueled anew.

After an extended period of inactivity, Venom resurfaced with cancer, and the only thing keeping him alive was the symbiote, who did not want him anymore. After seeing a spiritual movie, Eddie decided to sell his symbiote off in an auction, swearing off his life of vigilantism. The winner of the auction was the the gang lord Don Fortunato. He gave the symbiote to his son, Angelo, in hopes that Angelo would finally make a name for himself. The symbiote eventually left Angelo to die in mid-air. The symbiote passed on to Mac Gargan. Brock was discovered after making an attempt to kill himself. It is currently unknown if he survived.