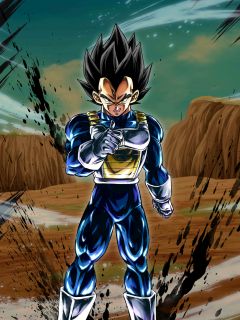 Vegeta's Saiyan physiology grants him a great level of physical superhuman strength which has shown to be sufficient to easily punch through a moving truck, shatter boulders and large rocky objects with single blows, lift heavy objects and moving extremely fast and acrobatically and performing fighting movements while training in 100x, 300x and even 400x Earth's gravity. During his first appearance his strength overwhelmed that of Goku during several moments in their battle and nearly killed him however as time passed Goku surpassed his strength however Vegeta has equaled and passed Goku's strength several times. Without using his chi-boosting ability, Vegeta's strength baseline is very close to Goku's allowing him to lift/press 100 to 150 tons with minimal effort. In his SuperSayin 1 form, Vegeta is at least capable of lifting/pressing at least 7500 tons. At the end of Dragon Ball GT, Vegeta like Goku achieves the final Super Saiyan form the Super Saiyan 4 and is well matched to Goku in terms of power. Vegeta can lift over 145,000 tons ,and the upper limits of his strength capacity are unknown.

Vegeta's Saiyan body grants him superhuman speed greater than that of any human in the universe. He moves and reacts at superhuman speed and as has been shown to move excessively faster than cars and is capable of moving well over many times the speed of sound, and arguably surpassing light speed as he is shown to routinely dodge ki beams which have previously been clocked at or beyond the speed of light.

Like all Saiyans, Vegeta's body is superhumanly durable however has been shown to not be as durable as Goku from time to time however at the end of Dragon Ball GT it is highly likely that he had become physically as durable as Goku. Vegeta can withstand high caliber bullets, powerful explosions and destructive energy blasts without sustaining damage and has several feats of durability such as withstanding energy blasts capable of destroying entire cities, and easily surpassing the durability of Frieza, who survived the planet Namek's explosion while already half dead. In the anime and manga, Vegeta is shown to be capable of taking quite a beating; referencing his fights with Frieza and Kid Buu. In the anime Vegeta is seen withstanding the destruction of several planets at once by his father, when he was still a small child. Vegeta is also capable of withstanding heavy blows from very powerful enemies such as Super Buu, Omega Shenron, Super 17 and more. Vegeta was also shown as the most durable of the posse that was present with him when facing Super 17 and the most difficult to deal with with the exception of Goku.

Vegeta has complete mastery over his energy manipulation and can use it for things such as energy blasts, energy waves, energy balls, energy spheres, energy shields and more. Vegeta is able to create colossal energy blasts powerful enough to easily destroy entire planets without using his full power, his favorite blasts throughout the series and his most powerful ones are Galick Gun, Final Flash and Final Shine Attack. It is noted during his battle with Android 18 that he has the ability to destroy the planet if serious, and is again noted that during Vegeta's battle with Perfect Cell when he launched a very powerful Final Flash that the Earth would have been destroyed on impact if he had not condensed the beam at the final second. Even during his first encounter with Goku he attempted to destroy the Earth with his Galick Gun attack but his attack was countered with Goku's Kamehameha blast and that could hint that Vegeta has destroyed planets before with single energy blasts. In the anime Vegeta easily destroys the planet Arlia with a casual blast from his fingertips. Aside from energy blasts Vegeta can create large energy balls his most powerful being The Big Bang Attack which he used to destroy Android 19 during his battle with him when he was a Super Saiyan. Vegeta can manipulate different types of energy the most common being ki for it is highly likely that before Vegeta arrived on Earth he did not how to sense and change ki at will. Vegeta can use the energy around him to enhance or and increase his power(including physical attributes) he does this by gathering the energy in his environment and a sign that the energy is being gathered is when a flame-like aura is formed around his body and when he increases his energy by gathering more energy when the aura is around him it begins to flicker as the energy begins to shift further increasing his power. He can also channel the energy through his body to increase his physical strength and can concentrate ki or any energy into single areas of his body such as fists to use energy enhanced strikes as spheres of dense energy form around his fists. Vegeta can also sense the energy of other beings and can use this ability to follow their energy signatures and locate the beings.

Naturally like all Saiyans, Vegeta has the natural mental ability of telepathy. Vegeta can use his telepathy to communicate with other beings however he is unable to launch mental attacks or protect his mind using mental abilities.

Vegeta can seemingly teleport several distances as he is seen suddenly appearing behind enemies by reappearance however this is probably an after image technique coupled with extreme super speed rather than truly teleportation, as it is never hinted that Vegeta know the Instant Transmission (Shunkan Ido) Technique.

Vegeta's Saiyan physiology produces less fatigue poisons than any human and he can engage in intense physical activity for weeks before the production of fatigue toxins begin to impale his blood and body. His stamina is further increased by his intense training.

His body grants him superhuman agility, greater bodily coordination and balance than any human in the universe and he is able to engage in complicated and humanly impossible physical acrobatic movements and his agility allows him to dodge and evade light speed fast attacks.

Like all Saiyans, Vegeta is able to engage in flight and has complete mastery over it as he is able to perfectly levitate, hover, spin swiftly while maintaining the same altitude and balance and can easily dodge fast projectiles while airborne. Vegeta flies incredibly fast and can fly at high atmospheric pressures and intense and harsh temperatures and environments. In the anime only Garlic Junior Saga he is even seen flying between nearby planets.

Vegeta like all Saiyans has the natural ability of super eating. Vegeta consumes enormous amounts of food however this is rather out of sustenance and the need to replenish his energy rather than sheer lust for food however there has been on one occasion where he gets into a fight against Goku because each one claims the other stole the other's food and this could be out of pure love of food.

Vegeta is a master of hand to hand combat and is an extremely smart and intelligent fighter finding out his enemies weaknesses and using them to his advantage. Vegeta normally observes his opponent's fighting style and rapidly creates counters for virtually every maneuver he witnesses, he is a master of many hand to hand fight styles as he was an elite Saiyan warrior and is a master martial artist on Earth and has even overwhelmed Goku in all of their battles with his skill and dexterity proving that his skills is more than enough for Goku to handle. He is arguably the smartest fighter in all of DBZ (Piccolo being the wisest and most careful) and he is functionally a better fighter than Goku in terms of pure skill.

Can sense others who have significant power and their locations. He can also raise and lower his ki to hide his location from others.

When the person moves at great speeds to create after images of themselves.

Just an energy blast, can fire it in the form of a ball or a wave.

A disc of energy that can cut through almost anything. If someone is significantly stronger they can catch it if they prepare themselves

If another person knows the fusion dance and has relatively the same power Vegeta can fuse with them to create one person for 20 - 30 minutes at a time.

Used against Goku in their first battle

Creates a barrier of energy

Shoots an energy blast from mouth (used in Oozaru form)

Rings of energy that restrains a person to a structure.

A Saiyajin ability that allows him to become stronger after every battle and near death experience.

One of Vegeta's signature attacks, an energy wave similar to Goku's Kamehameha. It is powerful enough to destroy entire planets if needed.

A devastating ball of energy that is fired from one hand. The resulting blast causes a massive explosion and usually leaves a mushroom cloud afterwards. This attack often regarded as Vegeta's most powerful move, and most of the time is used as his strongest attack in video games.

A one handed energy blast usually green in color

An extremely powerful suicide attack. Creates an immense ball of energy surrounding Vegeta and obliterates anything nearby.

Hair and aura turns yellowish gold and all attributes are greatly increased. In this form, Vegeta's base power is multiplied by 50 giving him a colossal power increase.

Mass and strength increase greatly but speed is decreased. Vegeta is never shown to have this form, but he is well aware of its strength and is assumed to be fully capable of becoming it. He doesn't because of its extreme speed decrease hampering his battle prowess.

Rage and concentration is no longer required to maintain the super saiyan state. It looks the same as regular super saiyan but is a tad bit stronger and can conserve energy more effectively.

Vegeta's already immense power is multiplied by 2 for a 100x power increase. However he has trained endlessly to enhance the power increase in this form. He is immensely strong and is shown to be STRONGER than Goku's Super Saiyan 3 in this form after the Battle of the Gods movie. Bills was able to stop Super Saiyan 3 Goku with a finger, but when Bills slaps bulma, Vegeta is able to give Bills a good beating until he gets serious.

A spirit bomb created of evil dark energy and is charged up much faster than Goku's. Vegeta only uses this technique when he is possessed by Baby.

When Vegeta has his tail and saw the full moon he can turn into the great ape. This form multiplies Vegeta's powers 10x. This form was also attained when Bulma used the Blutz wave on Vegeta.

Vegeta never reaches this form in the series. Although he is strong enough he is either unable or unwilling to transform into this state. Perhaps it is because he saw Goku use his Super Saiyajin 3 power up technique to kill Kid Buu but lost his power when charging up. Vegeta called the technique stupid.

Vegeta's most powerful form to date. This transformation gives Vegeta a divine ki and his hair and aura turn into a pale blue color. The power of this form is so great, that Wiss himself stated that if Goku and Vegeta worked together and fought Beerus while at this state, they would have a very decent chance to beat him.

Reddish brown fur covers the body and hair grows a little. This form is first reached by controlling the Golden Ozaru form.