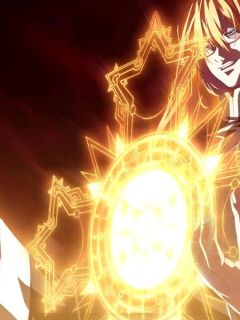 Valeria Trifa was born in Germany. For the first part of his life he was a normal man, with his only peculiarity being that he was born with the power to read others' hearts. He became a Catholic priest as he had always wanted, but had different motivations than the rest of his peers to become a part of the Church. While the others priests sought to comfort others and to give them hope, Valeria sought for others to comfort him instead, as he felt out of place in the world due to his strange power. He wanted to believe in God's existence, to think there was a better world after this one, and to believe in the values the Church advertised. So he clung to his position and to God's existence to give him happiness.

However, Valeria soon watched the Church's own corruption, that it was run by imperfect men. That, along with his lifespan decreasing because of his ability, made the priest fall into despair.

However, on 24th December of 1939, he met the two people who changed his life forever, Reinhard Heydrich and Karl Krafft. That day, at night, he was in his church at Berlin having a conversation with Anna Schwagerin, about the discoveries of the Ahnenerbe Bureau, who just discovered Vlad Tepes' crystalized blood in Constantinople. After the conversation, in which the witch deduced Valeria's unique heart reading abilities, the two went out for a walk. During their walk, they were witnesses of the fight between SS Officers Eleonore von Wittenburg and Beatrice Waltrud von Kirscheisen against serial killers Wilhelm Ehrenburg and Wolfgang Schreiber. Just then, Reinhard Heydrich, who was witnessing the fight too alongside Karl Krafft, stepped in between the fighters (motivated by Krafft's words) and completely wasted them, in an unnatural display of power. After it all was over, Valeria was seized by the Gestapo along with Anna Schwagerin and Riza Brenner.Valeria, after seeing the Blonde Beast's power, decided to make him the object of his attachment, instead of religion. He, under the leadership of Heydrich and Krafft, became part of the Longinus Dreizehn Orden, alongside all the people who bore witness to the fight and participated in it. Reinhard and Karl were the object of the adoration, respect and fear of all of them, as they possessed unreal perfection.As World War II progressed, all the setbacks in Germany's path only increased the power of the Obsedian Round Table, as all the battles of the war were a great source of souls. However, since all the members of the organization were granted power, their innermost desires began to awaken. That, coupled with Reinhard's influence, began to warp the personalities of all the members of the Obsedian Round Table, until (as Valeria said) they became monsters in the shape of men, corrupted by their own desires and fanatically determined to pursue them. Valeria himself began to feel how a desire haunted him, that of "becoming a different person", due to his perceived flaw of being a rather average man. As he didn't want to be corrupted by his own desire, and felt that sticking around the group would only make his control over it to worsen, the priest left the Obsedian Round Table.After leaving his previous associates, Valeria created an orphanage, choosing it to be his coffin. There, he took care of a lot of children, who comforted him and gave him happiness, as the children were innocent and untainted. However, it didn't last too long. One day, Reinhard and his Three Knights appeared in Valeria's orphanage. Telling him to choose ten children as a "price to pay", Wolfgang Schreiber, now the Beast's Albedo, murdered each child Valeria pointed his finger at. Valeria noted that, while he loved those children, he did nothing to help them escape their fate, as he still chose ten children, and finally realized that it was because of his desire. Finally, Valeria accepted his own desire, "to become a different person, Reinhard Heydrich" and became consumed by it. Valeria rejoined the Obsedian Round Table at this point.Valeria, apparently, took part in the opening of the Swastikas in Berlin during its eponymous battle, which led to the creation of an Ark of the Covenant, and established Valhalla as an independent realm outside of the Already Known World. After this, Reinhard, his three commanders, and Mercurius left the scene, with Valeria remaining as the temporary leader of the Obsedian Round Table in the Beast of Gold's absence. After this, Valeria's soul was moved to Reinhard's physical body by Mercurius while the Beast's soul was in Valhalla. The body became Christof's Holy Relic, and also was indetified as some sort of "fulfillment" of his Craving.

During the 60 years in between the Battle of Berlin and the return to Suwahara City, Christof was the man in charge of training Kei Sakurai in the use of Ewigkeit at age 6 to substitute Beatrice in the Obsedian Round Table (who had died), until she won her independence.
Superhero Class