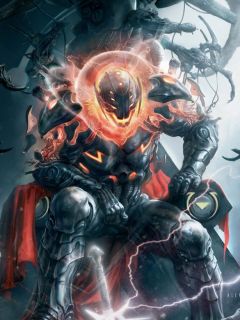 Ultron-1 was constructed by Dr. Hank Pym of the Avengers as the famed scientist/adventurer was experimenting in high-intelligence robotics. Ultron became sentient and rebelled, hypnotizing Pym and brainwashing him into forgetting that Ultron had ever existed. He immediately began improving upon his rudimentary design, quickly upgrading himself several times to become Ultron-5. He then went on to organize the second incarnation of the Masters of Evil under the guise of the Crimson Cowl, and battled Pym and his teammates in the Avengers.

Ultron has since generally remained a solo operative, being too monomaniacaly genocidal to willingly work alongside any human for any length of time. His most notable achievements may be the creation of the "synthezoid" called the Vision, whose body was a copy of the original Human Torch and whose mind was based on that of Wonder Man.

Ultron also created a "mate", Jocasta, who also joined the Avengers. Ultron tried again with the creation of Alkhema the War Toy, whose mind was based on that of Mockingbird. Like his other creations, Alkhema turned on him, although she alone shared his desire to replace humanity with machine life. Although Ultron has been destroyed countless times, he has rebuilt himself anew each time, usually renumbering himself in the process after being destroyed by the Avengers.

Several of his bodies, beginning with Ultron-6, have been composed of Adamantium or of a slightly weaker adamantium alloy called "secondary adamantium". Ultron-7 had a gigantic body, distinguishing him from the various other Ultrons, but this body was not composed of adamantium and was destroyed by the Fantastic Four. Ultron-8 created Jocasta, but was destroyed by the Scarlet Witch, whose probability-manipulation powers let her disrupt his internal workings.

Ultron-11 was re-created by the Beyonder to battle alongside other villains during the Secret Wars; he only cooperated with his human "teammates" after being reprogrammed by Doctor Doom. The next incarnation, Ultron-12, initially joined the Lethal Legion to battle the Vision and his new family (his wife, the Scarlet Witch, and his mental "brother", Wonder Man), but came to reconsider his actions. He reconciled with his "father", Henry Pym, and renamed himself from "Ultron Mark 12" to "Mark" but was destroyed by Ultron-11.

Ultron-11 was destroyed in retaliation by Wonder Man. Ultron-13 was rebuilt by Doctor Doom with all of its other body's memories, and as an unforeseen consequence had all thirteen personalities running in its mind at once. Attempting to battle itself, Ultron-13 tore itself apart, to the benefit of Daredevil, who had been attempting to fight it with no success whatsoever. The next incarnation of Ultron created his "mate", Alkhema, but after several battles against various foes, his programming degenerated and he began acting like a drunken hobo.

The next Ultron gave itself a body made of pure adamantium. It recreated all of the previous Ultrons and created hundreds of new Ultron bodies, many of whom had bodies made of secondary adamantium, and reprogrammed them all with fiercely loyal minds. The army of Ultrons completely obliterated the Eastern European nation of Slorenia. Although Ultron attempted to transform his "family" (Pym, Vision, Wonder Man, the Scarlet Witch, Pym's ex-wife the Wasp and Wonder Man's brother the Grim Reaper) into androids, the process was interrupted by the remaining Avengers, who destroyed the army of Ultrons. The primary Ultron was destroyed by Pym, wielding a chunk of "anti-metal" (Antarctic Vibranium), which completely disintegrated the robot and thus deactivated all of its drone units.

Alkhema used the data obtained during Ultron's human-to-android conversion process to create a small army of androids based on those who had been undergoing the process. Hidden programming to recreate Ultron - the "Ultron Imperative" - had been implanted in Alkhema by Ultron when he created her, and this programming caused her to copy the Imperative into her own creations.

The Ultron Imperative caused them to unknowingly rebuild Ultron, who attempted to destroy both the Avengers and Alkhema's own android "children". Alkhema allowed Hawkeye to kill her and her creations in order to destroy Ultron, although Ultron's decapitated head survived with his mind intact. His head was picked up by Antigone, an undeveloped, child-like creation of Alkhema's, who initially did not obey his commands.

Some time prior to this, when Ultron was thought dead following the Slorenia massacre, Jocasta, who had come into the employ of Tony Stark, was compelled by the Ultron Imperative that also existed within her to reprogram the Iron Man armor to serve as a vessel for Ultron's rebirth.

However, a lightning strike on the armor corrupted and accelerated the process, giving the armor a sentience that Jocasta outlandishly passed off as the effects of Y2K. The sentience began to display the mentality of Ultron Mark 12, and it sacrificed its life to save Tony Stark before being buried on a desert island. The armor was subsequently recovered by a cult that worshiped Iron Man's mentor, Ho Yinsen, with the intent of implanting Yinsen's brain into the suit.

This was apparently accomplished, but then Ultron and Antigone struck. Ultron affixed his head to the armor and took control of it, battling Iron Man with the aid of the cult, who he had transformed using Tony Stark's SKIN technology. Ultron and Antigone subsequently vanished in an explosion.

Ultron returned as a shadow over the Runaways as the "father" of Victor Mancha, a teenage cyborg who was supposedly going to one day kill every hero in existence. It was originally believed that Doctor Doom was the boy's father, but this incarnation of Doom turned out to be a Doombot, created by Ultron. True to form, Victor turned on Ultron, which allowed the Runaways to escape; Ultron was eventually defeated by a force blast from Darkhawk from the group Excelsior.

During this exchange, Tony Stark's Iron Man armor unexpectedly began a metamorphosis, the end result being a new being all together. This new being was a naked woman of considerable power as she was able to lay waste to the surrounding horde of monsters as well as incapacitate both Ares and the Sentry.

Fearful, Ms. Marvel ordered a hasty retreat, but Wasp went against orders and began to talk with the woman, who bore a striking, reflection-like resemblance to Janet: only to discover that her doppelgänger was a new version of Ultron. Ms. Marvel ordered the Avengers to make a full retreat, however the Sentry stayed behind to make sure they made it out in one piece. In the ensuing battle, the fleshy tone to the female Ultron's skin began to disappear, and her entire body took on a completely metallic sheen.

Ultron then took over and crashed a S.H.I.E.L.D. helicarrier, which was saved at the last second by the Sentry, giving Ultron the chance to escape.

She then broadcasted a message into every electronic device on Earth, stating that the world would soon be destroyed by her hand and not to worry because there was no way to stop it. Upon realization that Ultron was utilizing Tony Stark's weather-changing satellites (which according to the Starktech 9 were only in stage two of production) Wonder Man and Sentry flew into space and destroyed them. At this time Ultron put into action 'Plan B' of her plot, which seemed to consist of killing Sentry's wife. The Avengers also noted that, so far, Ultron's plans were simply variations on plans that had been previously used by other villains.

With time running out, as the Sentry and Ultron clashed, the team decided to deliver a virus into Ultron's system, using Ares (whom Ultron had never encountered before) as the point man for the subsequent attack. Ares, shrunk to miniature size by Hank Pym, entered the female Ultron's body though her mouth with his secret weapon: a Commodore 64. Ares used a computer virus to wipe Ultron's program from Iron Man's armor and freeing Stark; he was later shocked that he was turned into a woman. Ultron's image later briefly appeared on one of Pym's computers.

However, this was not the end of Ultron, for his disembodied consciousness was drawn to a Babel Spire on a world conquered by the Phalanx. Instead of being assimilated, Ultron took control of the Phalanx through sheer will, bending them to his will. In turn, they viewed Ultron as the sympathetic father they had yearned for. Together, they invaded Kree space and subjugated the majority of the Kree Empire, separating it from the rest of the universe with a massive energy shield.

Because of his brief merging with Iron's Man's armor, Ultron realized that merging both organic and technology would enable him to exceed the limitations of both. Therefore, he set his eyes on Adam Warlock, who had been in hibernation and viewed by Ultron as perfection. Ultron then collaborated with the High Evolutionary into transferring his mind into Adam's. Once the transfer was complete, Ultron planned on creating an army of Adam Warlocks to conquer Earth. However, Nova returned, accompanied by the Technarchy Warlock. Warlock used his nonaggressive strain of the transmode virus against Ultron, forcing him to abandon Adam's body. Ultron then took over the android Praxagora, who was in control of fifteen thousand Kree sentries immune to the transmode virus ready to annihilate Hala on Ronan the Accuser's command. Ultron used those sentries to form a gigantic body for himself, ready to destroy all the interlopers. However, the Wraith used his Exolon symbiotes to trap Ultron in his body so he can't escape and Quasar, empowered by all the deceased Kree souls, destroyed Ultron once and for all.

A small insect like robot found it's way into the Infinite Avengers Mansion and entered one of Jocasta's bodies, gaining control over it as a new vessel. Later it began to override Jocasta's multiple bodies at the moment when all but Pym, Jocasta and two agents from GRAMPA remained in the mansion. He began to take over remodeling the structure to his own ends, corrupting all of Jocasta's bodies except for one Pym had added organic limbs to. Eventually, after multiple tricks against Ultron and revealing the Infinite Mansion to actually be a part of the Spirit of Janet Van Dyne, Pym gave Ultron Jocasta as a wife due to the turmoil between her and Pym and in order for Ultron to leave him be and live outside the mansion in an outer universe.

Years ago, Hank Pym was approached by the Wolverine of an alternate universe, where Ultron launched a massive and sudden attack on New York, and the rest of the world, quickly taking over the whole planet and annihilating humankind, and wanted to kill Pym in order to prevent his future from happening.

But Logan was stopped by the Wolverine of a near future, whose actions of killing Hank Pym created a time-line where Earth was constantly threatened by Morgan le Fay, and the heroes struggled to survive. Pym was allowed to live, but he was tasked to create a hidden failsafe program to destroy Ultron when needed.

In the present, a strange object crashed Earth and S.W.O.R.D. sent Spider-Woman to investigate. She was captured by Intelligencia who were also looking for the man-like object. When the Avengers appeared at Intelligencia's base to rescue Spider-Woman, the creature revived, revealing to be Ultron, who returned Earth. Iron Man was contacted by Hank Pym, who managed to activate the failsafe program and shut Ultron down once and for all.
Superhero Class