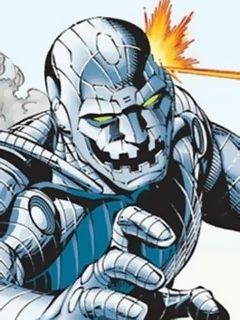 Ultimo was a robotic construct which was developed several thousand years ago on an unknown world. At some point in the past (probably in the early-mid 19th century) Ultimo attacked the planet Rajak and wiped it clean of life. A group of surviving Rajaki were off-planet during the attack, and hunted Ultimo down for what he had done. However, the giant robot proved too powerful for the Rajaki, and it was Ultimo who ended up pursuing them. The Rajaki led Ultimo into a meteor shower near Earth; the meteors knocked both Ultimo and the Rajaki ship to Earth. Ultimo crashed in China, and the Rajaki ship in what would become Washington State.

The Mandarin eventually discovered Ultimo and altered his programming to suit his needs. He claimed that Ultimo was his own creation; the only thing, however, that the Mandarin actually created (besides the different programming) was an artificial grey skin for the robot. Mandarin utilized Ultimo numerous times against Iron Man, including once in the nationā??s capitol, Washington D.C. During that battle, Iron Man trapped Ultimo beneath the Earthā??s crust. As a result, the robot meandered through the planetā??s magma absorbing an enormous amount of energy. Years later, while Iron Man was in battle with a rock-like creature dubbed the Earthmover near Mt. Acheron in California, Ultimo re-emerged sans his blue skin, significantly taller and much more powerful. He vaporized the Earthmover and destroyed a remote unit Iron Man, and then went about destroying anything in his path.

Jim Rhodes cobbled together several of Tony Starkā??s closest confidantes to wear old suits of Iron Man armor in order to meet the Ultimo threat. This group was dubbed ā??The Iron Legionā?¯ and proved successful only in slowing down the behemoth robot. It took Tony Stark in a new suit of Iron Man armor to figure out how to stop it; he planted a device on Ultimoā??s back which caused lightning to strike it, thereby shutting down all of its systems.

Ultimo remained in the possession of Stark Enterprises, and then eventually the new Stark-Fujikawa. Tony Stark was not part of the latter company and hence had no say (nor knowledge) of that companyā??s plan to use Ultimo as a floating power source. He was quite dismayed when he discovered what had become of the dangerous robot. However, his protests were met with deaf ears by his cousin Morgan Stark, now part of Stark-Fujikawa. Sometime later, two entities known as Sapper and Golden-Blade attacked the Stark-Fujikawa craft which laid atop Ultimo, attempting to siphon energy from it. Their attack unknowingly reactivated Ultimo, even as Sapper ā?? who turned out to be the sole-surviving Rajaki ā?? realized what the Stark-Fujikawa ship really was.

Once awakened, Ultimo probed Sapperā??s mind, learned who he was, and then continued to pursue that which he originally did before he crashed to Earth ā?? the Rajaki starship. The major problem was that the city of Spokane, Washington laid right in Ultimoā??s path. Eventually, Iron Man placed a systems tap on Ultimo which permitted him to access the robotā??s internal programming. He ordered Ultimo to stop and shut down, and after a few unsuccessful tries, Ultimo finally ceased his advance and deactivated. SHIELD arrived and began to disassemble the giant android, after Goldenblade and Sapper had siphoned enough energy from the fallen destroyer to re-power their ship - "accidentally" frying his neural network in the process.

Ultimo was separated out into several parts - His body, his brain and his software - and studied by, among others, the Human Engineering Life Laboratories who attempted to weaponize the giant android. They discovered his basic nature is liquid rather than solid, and proceeded to infect human subjects with him, temporarily turning them into miniature Ultimos. Having destroyed two components of the giant, War Machine (James Rhodes) caught up with Morgan Stark who, in an attempt to get out from under the shadow of his cousin, imbibed the liquid form of Ultimo to become a new giant destroyer. His will proved too weak, however (or insufficiently evil) and with the help of Norman Osborn of all people, War Machine managed to neutralize the now-liquid, shapeless and mentally blank robot. Suzi Endo, the Cybermancer, was charged with teaching the mindless, but functional Ultimo a new way to live.

Several 'prototype Ultimos' have appeared, presumably based on what was gleaned from studying the inert robot.
Superhero Class