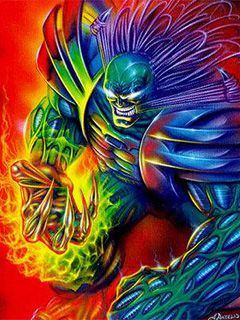 Tyrant possessed enormous cosmic power. He could absorb and channel a tremendous amount of cosmic energy for destructive purposes. He possessed vast indeterminable levels of superhuman strength, and was incredibly resistant to physical injuries. Being of bio-mechanical properties, Tyrant was effectively immortal. Tyrant also had the ability to psionically control any technology that he came into contact with at will.

In his original form, Tyrant was as large as Galactus and nearly as powerful if not as powerful. His fight with Galactus had easily destroyed countless Galaxies throughout the Universe. After Tyrant's eventual defeat and depowerement at the hands of Galactus eons ago he was reduced to his lesser modern state. When Tyrant was last seen he drew on the energy of planetary biospheres and proved capable of feeding on the energy blasts of Galactus.

In his diminished form Tyrant's power was initially portrayed as dependent on feeding from containers of superhuman energy, and directly proportional to the amount he had available. When at full power, he proved capable of easily defeating an alliance of super-powered beings which included Silver Surfer, Morg, Terrax, Thanos, Beta Ray Bill, Gladiator, Ganymede, and Jack of Hearts.

When temporarily denied access to his containers for a prolonged time, Terrax, Ganymede, and Jack of Hearts alone managed to keep Tyrant distracted for a few moments, and Thanos managed to barely survive a fight with Tyrant after empowering himself through one of Tyrant's containers.

In addition, Tyrant commanded a number of robots who proved powerful enough to incapacitate the likes of Gladiator and Morg. His Fortress had equipment capable of draining and storing the life forces of living beings to power his robots and Fortress.

His strength is so great, that even in his severely depowered form, it has allowed him to easily overpower multiple power houses such as Silver Surfer, Gladiator, Thanos, Beta Ray Bill, Morg, Terrax,Ganymede, and Jack of Hearts. The strength of his original form is unknown but it rivaled that of Galactus himself.

Tyrant appears to have vast knowledge of the living universe and cybernetics. He can also emit very powerful energy burst from both his hands and eyes.