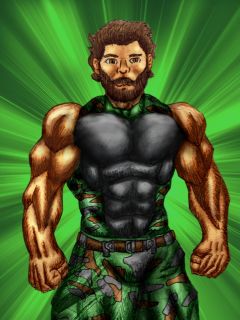 Tyranisus can not only change his size, growing up to 100 feet, but he can also morph his body into dinosaur like features,or if he wants to, he can morph his entire body into a dinosaur, he has been known to comebine dinosaur abilities to increase combat effectiveness, however, the more of his power he uses the more strain on his body.

Tyranisus in his base form he can lift approximently 600 tons, and stike with the force of 1400 tons or the equivalent of a large missle, however, when Tyrannisus grows in size so does his strength, he is able to grow to 100 feet, at this stage he can lift around 60,000,000 tons and strike at 150,000,000 tons, meaning if he wanted to, he could lift half of Manhattan or destroy all of it or a bit more in a single strike.

Tyranisus can move at the peak of human potential without any genetic enhancement.

Tyranisus at his base has shruged off C4's like boiling water and tanked powerful bombs, the bigger he gets the more durable.

Remember when I told you Tyranisus can mix Dinosaur abilities? What happens if he mixes to much? He becomes a 300 foot Kaiju who can move at one hundred times the speed of sound and can obliterate large stars.