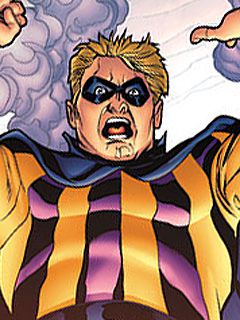 James Jesse was born to the Flying Jesses, famous circus performers. He, however, was afraid of heights, and preferred reading stories of Western criminal Jesse James. He invented air-walker shoes to get rid of his acrophobia, and this led to his fame as an aerialist at the circus. However, he wanted more excitement, and became the Rogues Gallery member, the Trickster.

Trickster escaped from prison when he learned that the Picture News was planning to raise $100,000 at a charity event, which he planned to steal. However, Captain Cold had done the same thing. At first competing for the money, they decided to join forces when they were pursued but not only one, but two Flashes, as Jay Garrick had briefly come out of retirement. The pair successfully made their getaway, but were later captured when the two speedsters lured them into a trap by claiming that a recently discovered meteorite contained a fortune in diamonds.

However, Blue Devil convinced him to give up his criminal career to become a special effects designer. However, this was short-lived, and James was soon back to his old ways. He was brought to Neron with a plethora of other villains, only to trick the demon into being defeated by Earth's super-heroes. He later worked for the FBI.

Added by Brian KurtzJesse, unhappy with his desk job at the FBI, grew bored and fell back in with the Rogues. He figured that if the government found out, he could claim that he was working undercover. When Inertia gathered them together in a plot to rob the new Flash of his speed, Trickster was among their ranks. However, the others were hesitant about including him, considering his past with the FBI. As a show of faith, he and the Pied Piper tricked a wealthy businessman into wiring his fortune to the Mirror Master and jumping into the ocean. When the Trickster realized that Piper had in fact kept the man from dying and transferred the money to a charity, he blackmailed Rathaway into transferring the money to him instead. Trickster was present at the Getty Center, where the Flash was killed. Although he had not actively taken part in the murder, he knew that he would be considered just as guilty as the rest of the Rogues. Jesse and Piper decided to work together to stay out of sight. He reluctantly went with Piper to the Flash's funeral. However, after a speech by Wonder Girl stressing the importance of capturing the Rogues, the two fled and decided and go their separate ways. Outside, they were shot by Multiplex and Deadshot.

Ultimately Trickster and Piper were arrested and handcuffed together. However, the two escape, but still shackle together, and made their way to Gotham City. From there they are offered partial sanctuary by the Penguin. Unfortunately, Penguin secretly works with the Suicide Squad and turn on the two. Piper and Trickster escaped again and only to be tracked by the Question and Batwoman. Piper and Trickster immediately begin to plead with the two heroes that they personally were not responsible for the death of Bart Allen. Batwoman quickly refuse to believe their innocence and concerns in bringing them to justice. The Question however, hears their story at which point Trickster used hand-puppets of themselves and the Flash to illustrate their innocence. Batwoman became furious at the disrespect that Trickster shows, and punched him down. The Question however, believes their story, stating that they are 'too stupid to kill time' and lets them go.

Trickster and Piper inadvertently made their way to Poison Ivy's greenhouse, and are captured. Deathstroke arrived and decided to use them as bait, planting a bomb on them. They are saved by the intervention of Wally West. Wally confines the two at the Green Arrow/Black Canary wedding, despite the warnings that Deathstroke is planning an all-out assault at the occasion. The two manage to escape the wedding assault, inadvertently picking up Double Down as a passenger. The trio stop at a diner in which Trickster and Piper hear out from Double Down of lesser and well known villains being disappeared. The three are tracked down by the Suicide Squad. Double Down is captured, but Piper and Trickster fortunately hid themselves with Trickster's makeshift invisibility field. The two then decide to follow the Squad while still using the invisibility field, and attempts to free the other captured villains. Once they arrived at their destination (Belle Reve), they encountered and free Two-Face, in which they learn from him that the villains are being exiled to a uncharted planet. At first the duo quickly decide to escape and offers Two-Face the chance in joining them, but he declines in a coin-flip. Having steal a vehicle from the prison, the pair then narrowly avoid capture by Deadshot.

Later the two travel on train and after a valiant attempt to save their own lives and an eventual acceptance of Pied Piper's orientation, the Trickster is shot by Deadshot while trying to defend Pied Piper. Piper is left alone with the corpse of Trickster attached to him still, and is lost in the Mexican desert with his dead companion. As Piper travel across the desert he starts to hallucinate in which that Trickster still talks to him. Piper eventually chops off the hand of Trickster after carrying his corpse as far as he can. While most of Trickster's body remained on Earth, his hand took the trip with Pied Piper to Apokolips. There, the hand fell into Apokolips after being separated from Piper. The planet then seemed to explode after Piper played his swan song for Trickster.