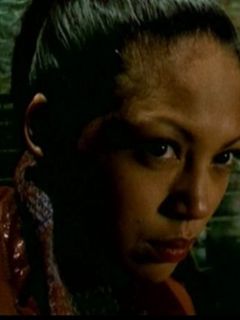 As is standard with X5s (and partially shared with the other transgenics), she has many superior physical traits, including:

Accelerated healing and metabolism (this makes it very difficult to become drunk).

Enhanced senses: eyesight (can zoom in and focus on objects from great distances) and hearing.

Enhanced immune system (all transgenics were made immune to all common bio-warfare agents).

Although X5s appear to be an ordinary human (except for the barcode on the back of their neck that's genetically encoded into their DNA), they possess extraordinary physical strength, able to overpower a man three times their weight. Their reflexes are super-humanly fast, and their eyesight and sense of hearing and smell are extremely acute, which, along with their training, would make it very hard for someone or something to catch them by surprise.

X5s can leap great distances vertically, allowing them to jump over tall obstacles, such as a barbed fence, and is capable of sprinting at extreme speeds allowing them to blur, making it very difficult for anyone to catch them on foot, with the exception of another transgenic.

X5s have enhanced night vision, to the point where they can see well in very little light, and telescopic vision, allowing them to selectively zoom in, and view objects from a distance.

All transgenics have a high number of stem cells in their blood allowing for them to have extremely high regeneration rates. However, if an X5's organ becomes extremely damaged, such as a bullet to the heart, it has to be replaced, and can only be replaced with an X5 or bio-mechanical substitute. All X5s are O-negative blood-typed and are universal donors but can only receive from another X5.

Their metabolisms are extremely high, thus making them almost completely insusceptible to alcohol and possibly poisons.

X5s are very dexterous and have extraordinary agility and coordination and advanced lung capacity, allowing them to perform complicated acrobatic and gymnastic manoeuvres that would be very difficult for a human, with ease.

In addition to their superior physique, X5s possess a genius level I.Q. and problem-solving skills. They are very gifted at assessing people and situations, which makes them highly adaptive to change and able to learn and mimic with extreme speed and accuracy.

X5s, meant to be the (transgenic) officers, were exceptionally well trained and suited for military combat, strategy, and espionage (including various weapons and martial arts).

Like all X5s, Tinga endured brutal physical and mental training and rigid discipline (brainwashing) from childhood until the time of her escape, and her training combined with her enhanced physique makes her nearly unstoppable when facing normal humans, though she is by no means invincible.

Trained as a Manticore super soldier and assassin, some assumptions are that: she is highly skilled in close-quarters-combat, recon, infiltration, tracking, observation, escape and evasion, espionage, computers, explosives, and handling vehicles (including various military planes and helicopters), has achieved fluency in many languages, and has a black belt in various martial arts such as Krav Maga, Taekwondo, and Judo.

As will all X5s, their higher body temperature means that a scanning device invented by Ames White's government agency can single them out in a crowd.