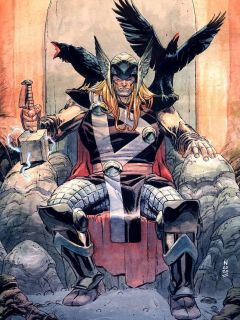 Thor has traveled across the realms, battling all enemies of Asgard and Earth, including the Death Goddess Hela and Olympian demigod Hercules. Though both Thor and Hercules fought on opposite sides during the Norwegian and Greek war in the year 1,000, they eventually teamed up and remain friendly rivals. It was his time on Earth leading the Vikings that began the Norwegian myth of the God of Thunder.

In one iteration of Asgard, Thor's thirst for battle led him to break an Asgardian treaty with the Frost Giants, leading Odin to punish him; Odin sent him to Earth as Dr. Donald Blake. When Blake discovered that he is the Norse God of Thunder known as Thor and is reunited with Mjolnir, he chose to divide his time between his life as an ordinary human doctor and an immortal God.

As Blake, he fell in love with the human Jane Foster. When he requested permission from Odin to marry her, Odin refused and told Thor he wasn't allowed to share his true identity with her. His affinity for Earth has caused many arguments and rifts between him and his father.

When Loki took advantage of his brother's love of Earth, Thor sought the help of Iron Man, the Hulk, Ant-Man, and the Wasp to ward off the Asgardian menace. His trickery led Thor and these super powered individuals to found the Super Hero group called the Avengers.

Balancing his dual lives, Thor continued to pursue Foster. Foster was granted temporary Goddess status, but Odin required proof of her worth. He set impossible tasks for her on Asgard, but she was unable to cope and returned to Earth, eventually marrying a man named Keith Kincaid. After this disappointing decision, Thor reunited with his friend Sif to share a romance.

Thor continued as Asgard's greatest defender, fighting off terrible foes such as the evil Mangog who disguised himself as Odin. During his reign, he bested Thor along with his allies the Warriors Three, but Thor ultimately defeated Mangog.

When Ragnarok threatened Asgard's demise, Roger "Red" Norvell took up Thor's mantle using his Belt of Strength and unique gauntlets to battle the Midguard Serpent. He died in doing so, but helped the realm narrowly avoid Ragnarok.

Enemies and wars aside, family drama reigned supreme as the God learned late in life who his real birth mother was. While he was born in Asgard to Odin and raised by his stepmother Frigga, the Earth Goddess Gaea actually bore him.

Thor, in his continued travels, encountered the alien Beta Ray Bill. Bill thought Thor to be a demon and seized Thor's hammer, proving himself worthy to wield it. Because they were so evenly matched, Odin created Stormbreaker, a new hammer to be used by Bill. Thor joined forces with Bill to help battle Sons of Muspel, demons serving the fire demon Surtur that threatened Bill's people.

It was just after this encounter that S.H.I.E.L.D. Director Nick Fury helped Thor establish a new identity and helped encourage him to keep in touch with humanity as Sigurd Jarlson, a construction worker.

When the Casket of Ancient Winters was unleashed on Earth, it ushered forth Surtur and the cyclical end of Asgard known as Ragnarok. Surtur went to war with Asgard, and Thor joined Beta Ray Bill, the Avengers, and Fantastic Four to stop Surtur. Loki joined the fight, battling alongside Thor and Odin. Odin casted himself and Surtur from Asgard to seal the realms from his menace, placing them in eternal conflict.

The following battles found Thor up against Hela the Death Goddess, who disfigured and cursed him with the inability to heal his injuries. Loki saw this moment as another opportunity to defeat Thor and set Thor's enemies against him, including the Absorbing Man, the Midguard Serpent, and the Destroyer. Thor bested these foes and confronted Hela in Hel to lift the curse. Hela, in order to save herself, healed Thor's injuries and removed the spell.

Just as one death goddess was defeated, another surfaced in the form of Seth the Death God, who held Odin captive. In Thor's effort to free his father, Surtur followed. Then Odin temporarily granted Thor his Odinpower, helping him to triumph over Surtur.

After these wars, an acquaintance of Jarlson's, Eric Masterson, aided Thor on a mission, but was nearly killed. To save him, Odin merged him with Thor. But, Thor's new guise as Eric was problematic, since he was a real man and much more complicated than Blake; often his life interfered with Thor's adventures. Alas, Eric filled in for Thor when Thor became exiled in the back of their collective mind, and even faced Loki in battle. Eric, however, was not the last human that Thor merged with. Jake Olson was the next mortal to play host to Thor, but his body proved to be less than worthy for the might of the God.

To break the Ragnarok cycle and foil Those Who Sit Above in Shadow, Thor let Asgard fall, allowing himself to presumably die. His demise proved false, though, when it was revealed that he was actually sent to a limbo-like dimension.

During the Super Hero Civil War, Tony Stark was desperate for Thor's assistance and cloned Thor from one of his hairs to create a cybernetic version of him known as Ragnarok. The clone lacked moral sense, though, and became an enemy of the Avengers.

When Thor arrived to limbo, it expelled his Donald Blake aspect back to Earth. Mjolnir also returned to Earth, so Blake retrieved it and then convinced Thor to come back from limbo to reestablish Asgard; Thor did so by moving it from a different to its new home hovering over Broxton, Oklahoma. There, Thor discovered Iron Man's Thor clone and the implementation of the Superhuman Registration Act. He then departed from the Avengers and devoted himself to restoring the slain Asgardians from Ragnarok.

During this restoration process, Loki schemed and mimicked Sif, who was trapped in the dying Rose Chamber's body. Loki drew out Balder, a prospective ruler and son to Odin, and revived Bor, Odin's father. Unaware of who Bor was, Thor slayed him, breaking Mjolnir in the process. Loki called Thor a traitor and Balder exiled him from Asgard.

Thor then turned to Doctor Strange to help him restore Mjolnir. It was bonded to Thor's life force so that any injury to the hammer would affect Thor. It was then that Thor learned of Sif's fate, allowing him to restore her to her body. Sif, the Warriors Three, and Thor then chose to settle in exile in Broxton before Asgard was finally restored to its own realm.

Thor Odinson eventually became unworthy of Mjolnir and his former lover Jane Foster took up the mantle of Thor in his stead. Possessing all his godhood and powers via the hammer, she battled as the Goddess of Thunder. The Odinson, along with his new weapon, the battle ax Jarnbjorn, departed to fight across the realms on his own.

When Jane Foster's cancer-ridden body could no longer take the rigors of godhood, she chose to battle a rampaging Mangog one last time in an effort to save Asgard from total destruction. In her final battle, she managed to defeat the monster, and allowed the Asgardian people time to escape the destruction. Jane Foster then stepped down from the mantle, allowing the God of Thunder to serve as Thor once again.