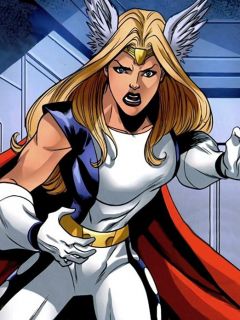 In the beginning of time, alien sorcerer X'Hoss foretells the creation of the Designate, who will help evolve sentient beings to the next level of existence. Billions of years later, Tarene is born. She is told about the fate of the evil Destroyer and together with others seeks a way to stop him. In the meantime, Thanos obtains X'Hoss' knowledge and destroys Tarene's home-world. She gains the help of Thor and Orikal in defeating the villain.

Tarene later transforms herself into an Asgardian goddess and becomes Thor's loyal ally, taking the name "Thor Girl" and the civilian identity of Jake Olson's 'cousin' Tara. She tries to assist Thor in his adventures, aiding him in his confrontations with Gladiator, Loki and Nullitor, but in a later battle against a revived Surtur she sacrifices nearly all of her cosmic powers to contribute the additional power needed to defeat him. Upon Odin's apparent death, Thor Girl loses most of her cosmic powers. She retains the powers she had as Thor Girl. She returns to Earth in an attempt to live a normal life as Tara Olson, but is also seen adventuring occasionally.

She knows that she is destined to, and one day will, regain her full power and then some, to become The Designate.

After the Superhuman Registration Act is passed, Thor Girl interferes in a jewel theft undertaken by the Grey Gargoyle, a previous foe of hers, and pummels the villian, preventing the jewel heist in the process. In return the Grey Gargoyle undertakes a law suit with the assistance of Mallory Book at the Superhuman Law Offices of Goodman, Lieber, Kurtzberg and Holliway.

Thor Girl is one of the first recruits for the Camp Hammond training facility. Other fellow trainees include Bengal, Cloud 9, Slapstick, Trauma, Armory, Rage and Komodo.

When the Initiative recruits are sent as crowd control in Manhattan, with Thor Girl aiding mass evacuation, when the city was attacked by the Hulk while he sought his revenge upon the Illuminati. However, Rage broke ranks to try and help the Avengers in battle against the Hulk and his Warbound, and Thor Girl was among the trainees who sided with Rage. Easily defeated, Thor Girl and the others were imprisoned at Manhattan Square Gardens and controlled by obedience disks. The Initiative's black ops team, including the empathic metamorph Trauma, were sent in to free Thor Girl and her compatriots, with Trauma assuming the form and powers of Thor as he battles the Warbound, leaving Thor Girl awestruck by the encounter.

Subsequent to Trauma's assumption of Thor's form, Thor Girl has expressed a kind of hero worship of and became enamoured with Trauma. However both Tarene and Trauma are brutally attacked by the MVP clone calling himself KIA (Killed In Action). Tarene is stricken heavily while protecting Trauma, who is then stabbed in the chest by KIA.

In an possible future where Thor rules Earth, Tarene regains her full cosmic powers to aid Desak in an attempt to defeat Thor. Thor kills Desak, but Tarene helps a now-enlightened Thor travel back in time to prevent the bleak reality he created.