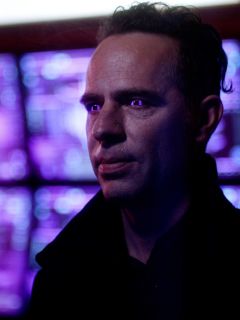 The Thinker's powers and abilities

After being struck by the S.T.A.R. Labs particle accelerator while wearing his "Thinking Cap", DeVoe's already high mental capacities were enhanced to superhuman levels. The Thinking Cap also shielded him from being directly exposed to the gene-altering energy, which allowed DeVoe to retain his normal human DNA, despite his enhanced physiology which enabled him to hide from S.T.A.R. Labs' meta DNA test.

The vastly augmented parameters of DeVoe's mentality have pushed his ability to process, react, memorize, deduce, analyze, and simply comprehend to surreal levels, able access any thoughts far faster and more efficiently than normal human levels, even exceeding any speedster. Before gaining his augmented intellect, DeVoe was an accomplished and well-known professor of history in all its forms. Even more, his intellect is continuously expanding, quite possibly ranking him the greatest mind in the multiverse, even making the intellects of other recognized geniuses seeming pathetic in comparison. To his credit, he solved many mysteries with his intelligence, including Riemann's hypothesis, Hilbert's 15th problem, and Jack the Ripper's true identity. DeVoe claims he can calculate and deduce the answer to almost any question and anticipate any potential outcome, and to his credit has anticipated ever action his enemies have taken several steps ahead of him as if being clairvoyant. He is even able to condition his thought patterns and general brain activity to mimic others, enabling him to perform feats like completing Schubert's unfinished eighth symphony by extrapolating the remaining movements after he familiarized himself with the body of his other 600 works in a single morning. DeVoe's meta-human powers are implied to be contained in his meta-human mind, as Ralph Dibny displayed no signs of any powers besides his own, once DeVoe's consciousness was erased and he regained control of his body. In addition to history, DeVoe has demonstrated to be expert in various other subjects such as mathematics and engineering; this has become even notable since attaining his superhuman intellect. As an engineer, DeVoe was able to create the schematics of the designs of the samurai robots and the "Thinking Cap". Despite his growing knowledge and skillset, he openly acknowledges his wife as a superior engineer. Also, he admitted to require access to the Speed Force in order to gain actual omniscience.

Between transferring his consciousness and current powers into other bodies or siphoning other people's powers into his current body, DeVoe has gradually expanded the number of meta-abilities he possesses. Between the continued assimilation of extra dark matter and his heightened mental parameters, DeVoe's control, range, and versatility in using these stolen abilities greatly exceed their original owners. He is also revealed to have retained the memories and knowledge of each individual he absorbed via the transferral technology. According to Marlize, Devoe's manipulations of events included calculating the exact combination of specific powers needed to counter any allies the Flash might have brought to bear against him (though it is unknown if this is true or not).

From Ramsey Deacon, DeVoe can sense the presence of and control any form of technology by imprinting his own encryption like a biological virus. When doing so, his eyes and all lightings affected by his powers glow purple. Whereas Deacon could only control a single target at a time and within the immediate vicinity, DeVoe can control all technology in the area, as he took control of all of S.T.A.R. Labs's technology.

DeVoe can duplicate and transfer his consciousness and all of his powers into any technology near him. However, without an actual living body, he cannot access any of his additional powers besides technopath. Also, should the technology's power source be destroyed, so will he.

From Edwin Gauss, DeVoe is able to create portals to other pocket dimensions, essentially "folding" the boundaries between them. This action also acts as a powerful defense, able to absorb any attack through one portal and then simultaneously redirect it through another portal.

From Matthew Kim, DeVoe's powers allow him to dissolve the bonds of DNA in a subject upon physical contact with them to alter its nature.

DeVoe can manipulate the metahuman DNA markers of individuals, allowing him to siphon and transfer the powers of one person to another host, even into himself.

DeVoe managed to manipulate his DNA to simulate another person's DNA to the point that any DNA test that comes his way can be fooled. When used with his shapeshifting abilities he would be genetically and physically indistinguishable from the individual he's impersonating.

From Mina Chaytan, DeVoe can temporarily animate effigies by leaving a psychic imprint of his dark matter on the molecular level of the target, controlling their movements as if genuinely alive. He can continue controlling these animations from a considerable distance and even outside of his field of vision. DeVoe can also control dead bodies in his vicinity as they become an effigy upon death, allowing him to reanimate their forms.

From Janet Petty, DeVoe can manipulate gravity. While Petty only demonstrated the ability to remove one's natural gravity to make them weightless through physical contact, DeVoe can also apply this power in the opposite manner by increasing a target's weight. He is also able to apply this power without direct contact. Also, DeVoe seems able to control the direction of gravity, as he was able to freeze Ralph in place. His control of this can be used akin to telekinesis, as he was able to restrain Gypsy in mid-air while using intense gravity around her throat to choke her.

From Becky Sharpe, DeVoe can emanate a quantum field, giving good luck to himself while also spreading bad luck to anyone in close proximity to himself.

From The Weeper, DeVoe is able to produce a psychoactive solution upon entering the person's body, which he used repeatedly on Marlize as her loyalty towards him began to waver. However, it remains unclear whether DeVoe absorbed the Weeper's powers, or simply harvested his tears to make use of them when he needed to control his wife.

From Sylbert Rundine, DeVoe can alter the size of any target by manipulating the space between their atomic bonds.

When DeVoe shrinks an object, he also offsets most of the mass in the object to make it light enough to pick up and store in his pocket, even objects as massive as a building. DeVoe gained this ability when he stole Rundine's powers.

From Izzy Bowin, DeVoe can project sound waves, able to focus them as powerful shock-waves or deafening vibrations that subdue foes in anguish. Moreover, he can control and direct any projected sound based aspect in the desired direction at whatever decibel range he can imagine. This was evident when he used a disabled guards' screams as a weapon against A.R.G.U.S. troops when he broke into the A.R.G.U.S. site where Neil Borman had been taken in order to keep him safe from Clifford.

From Dominic Lanse, DeVoe gained telepathic powers. Whereas Dominic could only hear the thoughts of people he was aware of, Devoe can detect the presence of all, as he immediately became aware of Cisco Ramon "vibing" him. He can also delve into their minds, allowing him to alter people's memories. Alternatively, he can launch psionic blasts at people, able to repel his target or even cause physical harm their minds, such as producing an aneurysm. He can also manipulate the movements of those near him. DeVoe was also able to use this power to place a "blockage" in Caitlin Snow's mind, making it more difficult for her to reach her Killer Frost side. Due to the nature of this blockage, it was initially suspected by Team Flash that DeVoe had used Matthew Kim's powers to take Killer Frost away all together, but they later learned that this was not the case.