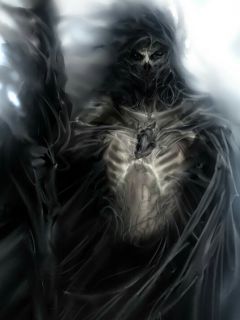 Michael is from the none magic world. When he was 12 he was kidnapped by a cult of magicians-wannabes who sensed great magical power in him. When they saw he is useless they let him go. For years later he tried to do magic with no success, untill one-day, when he was about 30-40 years old, he found a portal to another world.

This world's sorcerer supreme wasn't willing to teach Michael, Michael was very angry and killed him. All of the magical energy was then transferred to Michael, made him very powerful and gave him the connection to the dark-force. He then went on a crusade to kill the most powerful sorceres in the multiverse and gain their energy to himself. When he came to kill Dr Doom Victor was already ready for him and transferred his magic without the need to kill him, Michael absorbed his magic but then killed him anyway. He was killed by Emerald and then by Penny after time travel when they used the Rhinemann Ultra.