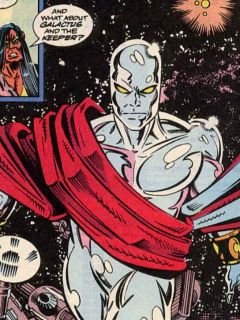 The Keeper's powers and abilities

As Norrin Radd, he was a scientist, a dreamer, and something of a philosopher. Skills which he sometimes finds quite useful. He is, however, is only an average hand-to-hand combatant, depending almost entirely upon his cosmic powers in battle. He is also capable of astronavigation and is very skilled at space travel using his board, including navigating through black holes and space warps. When traveling to a dimension such as the Microverse, the Surfer's body seems to adapt to the correct size automatically.

Radd's silvery "skin" was designed to easily withstand the rigors of deep-space travel, and thus far, it has proven to be virtually indestructible. In fact, his entire body was made highly resistant to injury and he is thus almost invulnerable to most types of physical harm. The Silver Surfer can withstand the crushing pressures of a black hole and can easily withstand great extremes in temperature. He is unaffected by the friction associated with atmospheric re-entry, and has withstood plunges into stars and even supernovae. He also routinely weathers the stresses associated with high-speed travel through space and hyperspace.

The Surfer possesses almost limitless physical superhuman strength, though the exact magnitude remains vague. He can use his powers to enhance his strength beyond its limits, enabling him to lift in excess of 100 tons. When further augmented by the Quantum Bands, his strength can reach infinite levels, with enough physical strength to confront Galactus.

He has highly enhanced musculature generates virtually no fatigue toxins, granting him nearly inexhaustible physical stamina. However, he does require sleep on occasion, due to his brain's biological need to dream.

The Silver Surfer can rearrange matter to create other objects of importance by rearranging molecules. He can also change the state of matter, such as changing solids into gas. Matter transmutation helps the Surfer escape traps and prisons and can also be used to make enemies' weapons inactive.

The Surfer's skin is designed to absorb various energies from beta particles to light. He is constantly being charged from hundreds of nearby stars and energies from distant galaxies. He can change this absorption into reflection if he chooses. The Surfer has also absorbed so much energy from a sun before, that he turned into a living bomb.

The Surfer can use energy to create force fields and shields. He can solidify energy to imprison enemies. He can manipulate the energies around him to make space travel possible for beings around him that can not survive in space.

The Surfer has shown the ability to read minds and sometimes needs to make a conscious effort not to. He prefers to speak rather than read a person's thoughts.

The Silver Surfer does not need to eat or breathe since he absorbs life-maintaining cosmic energy directly through his skin.

Radd possesses the Power Cosmic which was granted to him by Galactus. These were temporarily taken from him by Galactus but were restored by the Watcher, through an awakening of the powers inside of him.

His senses were enhanced by Galactus, which allow him far-ranging vision (in space he can see people clearly over a light year away), the ability to see sub-atomic particles, superhuman hearing, the ability to detect fields, traces, and concentrations of energy and discern their natures.