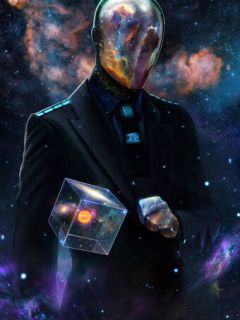 Long ago, before the creation of the omniverse, there was a void, a void of nothing but atoms, these atoms started to clump together and after trillions of years those atoms made up a being, a being of great power, capable of doing anything he could think of, and he called himself, The Imaginator. But after a while he started to get lonely, so he created other beings, much like him, capable of doing anything they wanted, but they grew to powerful, so he had to set limits, but still some were still too powerful, so The Imaginator split them up and created the Omniverse, a place to live. He created billions of multiverses and in them billions of universes. He then sent of these beings of great power off to each multiverse, so they can watch over that multiverse and alert The Imaginator if needed, these beings were called Gods. He then created evil, darker creatures with the same powers as the gods to keep the balance of good and evil, he called them Demons. And then Inside those universes that he had created he made planets and on those planet’s he created beings of no power so they can just live. He then created Immortal beings known as, Death, Fate, Life, Creation, Destruction, light, Dark, Time, Space, Reality, Energy and Matter. After this he then sends of mystical energy into each of these Multiverses and when powerless beings find this mystical energy it can grant them magical abilities depending on the user. After he cast the energy out he took that mystical energy and forged it together to create a being he called an AllHuman, which he said where beings with power comparable to gods.

The God becomes a Human

Once The Imaginator had completed his creation he wanted to observe them up close so he went to his most trusted son and gave him his memory. Then he temporarily neutralised his powers and travelled to earth where he was adopted as a child by Edward Henry Atom and Janice Maria Atom. They named him James Henry Atom, by the Human age of 10 he started having dreams about The Imaginator, thinking he was a fictional character by the age of 12 he started writing stories about this character and then by the age of 13 he started writing comics about him. But then in 1914 World War One begun and his father (a very important and disciplined man) told his son to give up writing comic books and get a degree in Quantum Mechanics so he could help win the war. Then on the 11th of November 1918 when the war ended James was working on an experiment to open a portal to a parallel universe but once he had opened the portal it started to become unstable and a wave of energy washed out and hit James. 4 hours later he woke up with his lab destroyed and knee injured but to his surprise it instantly healed the moment he looked at it. Meanwhile, the God of the Multiverse he put himself in was watching and he knew it was time. So the God confronted James and tapped him on the head, this gave James his memory back and he took his place back as The Imaginator, creator of all that is, all that was and all that will be. He then rewarded that God with The Cloak of The Call which could call The Imaginator at any time and as he gave it to him he told him to pass it down to his son and his son’s son and so on. Then he left and went back to his throne outside of the omniverse. He will then watch as the Gods, Devils, Angels, Demons, Humans and every other race live and die until the end of everything.

There was once an Angel, his name was Lucifer, he hated The Imaginator and created a plan to prove that he wasn,t the creator but just a normal man. So he called The Imaginator and told him that something catastrophic was happening in his Multiverse but because The Imaginator is Omnicient (all-knowing) he knew that he was lying. The Imaginator called Lucifer to his Throne of Infinite Imagination (which draws its power from The Staff of Infinite Imagination, more on that later) and asked him what was wrong, Lucifer told him that every race in Lucifer’s Multiverse is at war. Still aware that he was lying, he told Lucifer he knew he was lying but then asked him why and Lucifer responded, “Because I don’t believe you’re the all-powerful being, I believe your nothing more than a Human posing as an all-powerful creator.” “Well my grandson I am so sorry that you have mislead but I will show you my true form but let me tell you this, you are only The First of the Fallen there will be many more.” Answered The Imaginator. The Imaginator’s suit dissolves into the air and he becomes a giant wall of pure energy, immediately Lucifer spreads his wings and tries to fly to the top of the ever growing wall of energy andthen he stated that The Imaginator in his true form is larger than the omniverse itself, Lucifer then fainted after seeing the size of The Imaginator in his True Form. The Imaginator then had to repeat this millions of times with different Lucifers from different Multiverses. After, Lucifer woke up in the dimension of Hell being worshiped by the Demons, for he was The First of the Fallen, he was Lucifer, he is, The Devil.

The Trinity of Infinite Power

The Orb of the Omniverse

The Orb of the Omniverse is an object that carries the omniscience of The Imaginator which makes the user Omniscient. This object is also kept in The Secret Vault.

The Secret Vault is one of the infinite rooms of The Imaginator’s Castle and is where every Relic, Object or Weapon in the entire Omniverse ends up.

The Imaginator’s Throne is different to regular throne rooms, it has a Throne but the rest of the room is blank.

The Elixir of Eternal Life

The Elixir of Eternal Life is a drink that is made by unknown ways of manipulating the energy that The Imaginator is made of and gives anyone who drinks it immortality and The Imaginator is the only is the only one who can reverse this process but if someone who is not worthy drinks it then they will be erased from existence.
Superhero Class