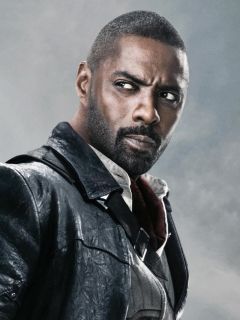 11-year-old Jake Chambers experiences visions involving a mysterious warlock, the Man in Black, who seeks to destroy a Tower and bring ruin to the Universe while a Gunslinger opposes him. Jake's visions are dismissed by his mother, stepfather, and psychiatrists as nightmares resulting from the trauma of his father's death the previous year.

At his apartment home in New York City, a group of workers from an alleged psychiatric facility offer to rehabilitate Jake; recognizing them from his visions as monsters wearing human skin, Jake flees from them, and they give chase. Jake finds an abandoned house from one of his visions where he discovers a high-tech portal that leads to a post-apocalyptic landscape called Mid-World.

In Mid-World, Jake encounters the Gunslinger, Roland Deschain , who has emerged in his visions. Roland is pursuing Walter Padick who has also appeared in Jake's dreams, seeking to kill him as revenge for the murder of his father, Steven, and all remaining Gunslingers. He explains to Jake that for decades, Walter has been abducting children with psychic powers, attempting to use their "shine" to bring down the Dark Tower, a fabled structure located at the center of the Universe. This will allow monstrous beings from the darkness outside to invade and destroy reality.

Roland takes Jake to a local village in order to have his visions interpreted by a seer. Having learned of Jake's escape, Walter investigates and discovers from his minion Sayre that Jake has "pure Shine", enough psychic potential to destroy the Dark Tower single-handedly. Walter kills Jake's stepfather; then he interrogates his mother about her son's visions before he kills her as well.

Back in Mid-World, the seer determines that the machine is six months away on foot and portal access is restricted to Walter's bases. Jake realizes that Walter has a base in New York that they can use to reach the machine. Suddenly, the Taheen, Walter's minions, attack the village – but Roland systematically kills each of them. Roland and Jake return to Earth where Roland's injuries are treated at a hospital. Jake learns the location of Walter's base from a homeless man who helped him earlier. When Jake returns home to check in on his mother, he finds her charred remains and breaks down in tears. Seeing this, Roland vows to avenge her death. This leads to him teaching Jake the basics of gun fighting, as well as the Gunslinger's Creed, which he hasn't uttered since his own father's death.

As Roland replenishes his weapons supply at a gun store, he is attacked by Walter, who captures Jake and takes him through a portal at his base to a machine that will destroy the Dark Tower with Jake's powers. Jake uses these psychic powers to alert Roland to the portal code he needs and Roland battles his way through Walter's henchmen, reopening the portal, which Jake forces to stay open. Walter is forced to return to New York to fight Roland and wounds him. When Jake reminds him of the Gunslinger's Creed, Roland recovers and kills Walter with a trick shot after a brief fight. Finally he destroys the machine and saves the Dark Tower, Jake, and the other children.

As the film ends, Roland prepares to return to his own world and offers Jake a place by his side as his companion. Jake accepts the offer and the two head back to Mid-World together.