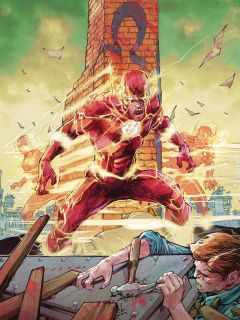 Barry Allen is the Flash, a heroic speedster who was also a member of the Justice League of America. He became one of the Anti-Living.

Once the corrupted Anti-Life Equation spreads worldwide, Batman contacted Flash and told him and Kid Flash to go into hiding, knowing how disastrous the consequences would be if they're infected, for which they agreed. They remain in hiding until Superman and Green Lantern found them. Barry later left with the latter and Wally to the Daily Planet.

Later, Barry and the group of survivors at the Daily Planet fight an infected Giganta, who dies when Cyborg blows a hole through her head. Quickly after, Hawkgirl falls from the sky and into Wonder Woman's arms, telling her that Captain Atom is going to blow. As soon as this is revealed, Superman and Wonder Woman take Captain Atom as far as they can away from the planet. However, Atom explodes, destroying Washington, Baltimore, and Metropolis.

Fortunately, Green Lantern created a bubble saving the survivors. Later, the group plans to take down all of the internet, so that the infection can only spread from person. Soon, the Fortress of Solitude turns into a Hall of Heroes, having the rest of the surviving heroes sheltered. However, an infected Martian Manhunter assaults and kills Lex Luthor, ripping him in half. Manhunter then turns on Flash, and cuts him in his back. Firestorm takes care of Manhunter by burning him to death. Infected, Barry immediately runs out of the Fortress. When he is finally fully infected, he attacks survivors all across the world, only being stopped when Superman collides into him, killing the infected Scarlet Speedster. However, two of Flash's fingers get into the Man of Tomorrow, infecting him.