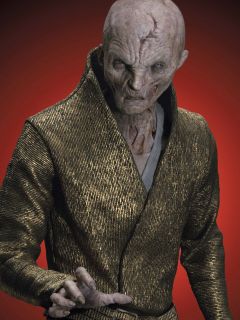 Snoke is the supreme leader of the First Order and Kylo Ren's former master. In Star Wars: The Rise of Skywalker, Snoke was revealed to be an artificially humanoid alien created by the resurrected Darth Sidious to seduce Ben Solo to the dark side and rule the First Order through Sidious's control.

Snoke sends Kylo Ren and the First Order on a search for Luke Skywalker following his disappearance. At Starkiller Base, Ren and General Hux contact Snoke via hologram to report the progress of their individual assignments. While Snoke is irritated when Ren admits his search has been delayed, Hux proposes using the Starkiller superweapon against several New Republic planets who have been caught supporting the Resistance, which Snoke authorizes. After Hux is dismissed, Snoke confides in Ren of an awakening in the Force and urges Ren to kill his father to overcome the Light side's temptation and fully embrace the dark side.

After capturing a scavenger named Rey who had seen a piece of the map to Luke, Ren seeks for Snoke's guidance after she was able to resist and counter his interrogation. Ren claims that the girl was strong in the Force, to which Snoke orders Ren to bring her to him, however, Rey manages to escape before this can happen. Later, Ren was defeated by Rey in a duel while the Resistance attacked the base, causing the planet to collapse. Moments before the base's total destruction, Hux contacts Snoke, who calmly orders Hux to bring Ren to him in order to complete his training.

Sometime after the destruction of Starkiller Base, Snoke began directing several maneuvers designed to eliminate any possibility of hope returning to the galaxy. He empowered General Hux to pursue and destroy the Resistance fleet and was delighted when Hux found a way to track the fleet's movements through hyperspace, thereby allowing the First Order to immediately pinpoint their location, wherever they might be.

Snoke then summoned Kylo Ren to him, and after questioning if his apprentice was recovering, he proceeded to belittle Ren for his failure, saying that the young warrior was weakened by the conflict in his heart since his father's death, emphasizing his displeasure by electrocuting his apprentice with a blast of Force lightning. He also stated that for all his attempts to emphasize Darth Vader, Kylo Ren was little more than a child in a mask before dismissing him. At some point, Snoke uncovered and used his Force powers to manipulate that exists between Rey and Ren. Through the Force, both Rey and Ren could see each other and communicate from different locations in the galaxy, so Snoke tried to manipulate them into revealing Skywalker's location in order for him to eliminate the Jedi once and for all.

Believing she could restore Ben Solo to the light, Rey sought Ren out and was brought to Snoke aboard the Supreme Leader's flagship, the Mega-class Star Dreadnought Supremacy. Using his skills with the Force, Snoke tortured Rey, successfully probing into her mind and discovering Skywalker's whereabouts, laughing with sadistic glee at the idea of killing Rey and Luke.

After obtaining the knowledge he sought, Snoke commanded his apprentice to execute Rey, believing she represented a threat to both himself and the dark side. He was confident that Ren would not turn in spite of Rey's faith in his former persona, that of Ben Solo. While reading his apprentice's mind, he was able to detect Ren's new resolve and thought that his apprentice had decided to strike Rey down, when Ren was in fact aiming for his master. He failed to detect Ren using of the Force, subtly turning the Skywalker lightsaber in Snoke's direction, instead believing Ren's actions were to cut Rey down. The blade activated straight through the Supreme Leader, cutting him in half. Shocked and disbelieving, Snoke fell to the floor and died, his reign ended by the man he never thought could betray him. Despite his bodyguards' efforts to avenge their leader, the entire Elite Praetorian Guard was destroyed by the combined efforts of Ren and Rey.

Snoke's death created an immediate power vacuum that Ren took advantage of by assuming his fallen master's role as the new Supreme Leader of the First Order, much to the displeasure of Hux. Although Ren desired to rule the galaxy with Rey at his side, the aspiring Jedi rejected his offer, leading Ren to falsely implicate her in Snoke's assassination.

Star Wars: The Rise of Skywalker

It is revealed that Snoke was a genetically-enhanced being created by Darth Sidious after he came back to life. During Snoke's reign, Sidious bided his time in the Unknown Regions building a massive Sith fleet.
Superhero Class