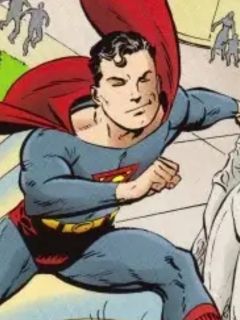 Clark Kent, born Kal-El of Krypton, is the Superman. He started a whole family of superheroes for multiple generations.

Kal-El was the last son of Krypton who came to Earth and was adopted by a Smallville couple called the Kents, naming him Clark Kent. As a young boy he discovered he had powers and abilities far beyond those of mortal men. In his early teens he adopted the secret identity of Superboy so he could use those powers for good, with his first case protecting a young Bruce Wayne from the Ultra-Humanite when he and his parents visited the Smallville county seat in 1920. In 1929, he attended a junket of journalist students in Gotham City due to an essay he won in a contest held by the Gotham Gazette's owner Bruce Wayne, where he as Clark would meet Bruce as well as his future partner and wife Lois Lane. While touring the city with Lois on the junket, he saw a robot rampaging through the streets, whom his X-ray vision revealed was controlled by Lex Luthor, an old friend of his that turned evil due to an accident he blamed on Superboy. Clark changed into Superboy to deal with Lex, who had captured Lois with the robot's metal claw. He was soon joined by Bruce in his masked identity as Robin, who forced Lex to abandon the robot and let it continue running amok until Superman carried it to the moon and dumped it there after breaking off the robot arm still clutching Lois. After Lois was freed from the claw, she joined Superboy and Robin in investigating where the robot came from, and they tracked it to the lab of Dr. Erwin Stanislaus, who turned out to be Luthor in disguise. He tried to take off with Lois again with a portable helipack, this time holding Superboy at bay with a piece of Kryptonite until it was knocked out of his hand by a curved piece of metal thrown at him by Robin. Superboy cut off Luthor's escape and turned him over to the authorities with Lois giving him a kiss before he departed.

In 1939 Clark Kent was working as a reporter alongside Lois Lane, investigating the Electrox robot that went berserk at the Metropolis World's Fair -- the same robot that he had stopped as Superman by crushing him into a metal ball and throwing him into the river -- when they came across Batman at the display building. He took the piece of evidence Lois had found while Clark made it look like Batman had knocked him down, though he was impervious to the blow itself. He helped Batman interrogate one of the Ultra-Humanite's henchmen to reveal the secret hideout of the villain himself, who was holding Lois Lane captive, and prevented his escape using a hidden rocket built into the Pyramax by throwing the Hyperglobe at it, destroying the rocket.

Clark fell in love with Lois and married her during the 1940's, revealing his Superman identity to her. In 1949, Lex Luthor and the Joker held Lois Lane (at that time pregnant with Joel Perry Kent) captive while exposing her unborn child to Gold Kryptonite radiation, causing him to lose his powers. With the help of Batman and Robin, each of which posed as Superman to distract both villains, Superman managed to rescue his wife, though now with his unborn child now completely human, he and Lois vowed they would never reveal to Joel that Superman was his father.

Clark continued to work for the Daily Planet as a reporter until he became its editor, a position he stayed in until 1979, though because he didn't age as normally as a human, he had to alter his physical features as Clark to maintain a semblance of human aging. He fathered another child three years after Joel, a daughter named Kara who had powers like her father though on a lesser scale due to her hybrid parenting, who eventually took on the identity of Supergirl, fighting alongside Bruce Wayne Jr. as Batman. He was disappointed, however, when his son Joel found out he was the powerless son of Superman, and was told a lie by Lex Luthor that Superman had purposely exposed Joel prenatally to Gold Kryptonite because he feared his son's powers would be greater than his own. Joel went off to fight the Vietnam War as a soldier, and was reported as killed in action in 1969. Also around that time, his wife Lois was diagnosed as having cancer.

In 1979, while Lois was undergoing treatments for cancer, she and Clark attended the wedding of Bruce Jr. and Kara -- a happy moment that was brutally shattered by a man wearing a green and purple battlesuit who struck Clark down with intense Kryptonite radiation, exposing his identity as Superman. The man in the battlesuit, who later revealed himself to be his son Joel, blasted Kara as Supergirl away and then later ripped her heart out of her chest, killing her. Clark in his weakened state watched as Lois' physician Dr. Holurt revealed himself to be Lex Luthor, trapping him and Lois within a force field long enough to break Lois' neck before he teleported away. Regaining his powers sometime after, Superman found Luthor's hideout and saw his son Joel dead from a formula he used to regain his powers. He was angry enough to kill Luthor, but the villain teleported away, revealing himself to be nothing more than a hologram. Joel's wife Mei-Lai Kent appeared, showing Superman his grandson, who like Joel was born with no powers.

Kal-El spent the next ten years searching for Lex Luthor and not being able to find him. In 1989 he suddenly discovers him hiding out in a metallic structure and flies in, ready to deal him justice when his powers are removed. Luthor reveals that the gold cuffs he is wearing are made of Gold Kryptonite, and that he is actually Superman's old nemesis, the Ultra-Humanite, who survived death by having his brain transplanted into Luthor's body. Now he seeks to use a machine that would enable him and Superman to transfer minds with each other so that Ultra-Humanite can gain all of Superman's powers. Unable to stop Ultra and trapped in an electrcial cage, Superman picked up a piece of metal and struck it into Luthor's body, accidentally electrocuting the villain who had the whole thing recorded and televised in order to frame Superman, and then had all the equipment in his laboratory fused beyond repair to destroy all evidence of Superman's innocence. Despite this, Superman chose to appear before a governmental grand jury and declare himself guilty of killing the Ultra-Humanite as Lex Luthor, stating that he feared his emotional state at the time may have led him to commit this action. With the judge unable to sentence Superman to a suitable punishment for Earth criminals, Batman presented an alternative for his case: ten years in the Phantom Zone. As the judge permitted, Batman activated the Phantom Zone projector and watched as his friend and mentor vanished, saying that hopefully in ten years Batman would make the world a better place.

In 1999, Bruce Wayne as Batman released Kal-El from the Phantom Zone and helped him regain his powers with the assistance of both Kal-El's grandson Clark Wayne, now operating as Knight-Wing, and Kyle Rayner, Alan Scott's successor as Green Lantern, when they found a vial containing the formula the Ultra-Humanite had created to restore a Kryptonian's lost powers due to Gold Kryptonite exposure. With his powers restored, Superman recreated the same formula and gave it to this grandson so that he may also have powers similar to his, though on a lesser scale. As Clark Wayne is now getting used to his Kryptonian powers, Kal-El decides that he shall leave Earth to help other worlds in the universe that may need him. He returned briefly in 2019 when his Chronoscope picked up a transmission from his foster father Jonathan Kent with a message for Bruce Wayne concerning the fate of his parents.

In 2919, it is revealed that Kal-El had married Lana Lang, who through her magic spells has somehow attained eternal youth and immortality.
Superhero Class