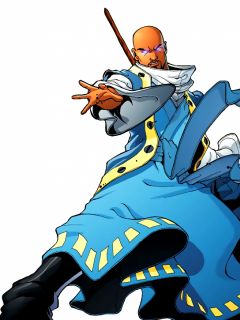 As the story goes a man named Harvey Dent fell off the tallest building on Earth. He walked away with only a few scratches. The fall was thought to be the cause of what would have eventually changed him from an average guy to a superhero. Though it wasn't the fall itself what it had unlocked. His mind started to evolve faster than any human had ever evolved in history. He developed Telekinesis and Telepathy and was capable of anything he could think of. He eventually became a superhero and was bestowed the name "The Superman", it was not long after he started his carrier that he found out what had happened to him to make him what he was. Back in the 1970s, Nightwing tried to create more superhumans, to facilitate this they dosed the population of an entire town in South Carolina with an experimental evolutionary accelerant called the Miraclo Solution. Harvey was the only survivor.

With his newfound powers, Harvey as the Superman continued to develop his powers at an amazing rate. Harvey started by taking on slumlords, then local thugs, and eventually moved up to defeat supervillains. After a few team-ups with the Atom and Flash, it was the Atom who in a Karl Ferris interview publicly declared his doubts about whether the intentions of Harvey as the SuperMan were as altruistic as they should be. It was obvious that Harvey did not do his deeds to play Good Samaritan, but that he liked solving problems.

Harvey re-created the Miraclo Solution and gave it to his fiancé Lola, so that she may join in on her journey of evolution, it was originally believed that she didn't survive it. However, this was a myth. Lola received powers similar but not equal to the magnitude of Harvey's powers.

The United States of America had already set up a team of metahuman hunters referred to as the "Justice League of America" to hunt down citizens with superpowers since the original Atom's announcement of his true involvement in the Cuban Missile crisis brought it to the government's attention that metahumans were a national threat. With this information and the arrival of the Ultra-Humanite created in the Soviet Union as a byproduct of more metahumans led the Justice League of America to assassinate the original Atom, and try to hunt down the SuperMan, Green Lantern, the dark knight known as the Batman, and a newly arrived alien being known as Wanda or the "Wonder Woman". Green Lantern would resurrect the original Atom as a protector, and the rest of the hunted would discover the base of the Justice League of America and meet at that location. They vowed to work together to keep from being further hunted.

With the worldwide threat of the Ultra-Humanite solved, Harvey as a problem solver turned his mind toward solving the problem of the world itself. Reeling from the destruction of the E.M. pulse cased by the Ultra-Humanite's creation, the world was already in a great deal of chaos. There was a lot that needed repair with most of the world's energy grids and communication networks down.

No sooner was this crisis solved when the world was ripped apart by an event spanning multiple worlds as the Infinite Crisis would fill Harvey's sky would hundreds of other Earths. When this happened he and all the heroes banded together to salvage what they could of their world. It was also during this event that all the worlds were channeled through the central being common to all worlds, a being referred to as "Superman". The shock of this channeling shot through all the Superman in an instant. Being of a tangent world, Harvey was perhaps affected differently by this than all other Superman of other worlds.

After that crisis subsided, the world was now in a larger disaster state than how the Ultra-Humanite had left things. At this point the Superman saw the opportunity to do more than bring the world back to what it was, but to form into something better. One day he appeared at the United Nations building and told the world leaders that from that point on he would be running the world. During this phase, his wife Lola Dent helped him in bringing the world back to order in the hopes of making a better world.

Part of his solution to a better world was to centralize the world's resources and decisions and bring it all in line with his direction. At some point, he instituted the Global Peace Decree making it illegal for a metahuman to display, utilize, or refer to any special abilities. Opposition to this decree became steep, so he next instituted the Purge, which was designed to weed out anyone who would speak out against the centralization of the world governments under his direction. Later he would bring about "The Question" which could monitor every camera and data port in the world. The Secret Six, former allies of the SuperMan, opposed this new direction taking away personal liberties and tried to take the SuperMan on in person. The confrontation ended with the SuperMan pushing back the Secret Six and capturing the Joker, who he would interrogate and kill.

After actions like this where Harvey removed liberties and would result in murder to further his plans for solving the world's problems, Lola Dent asked to be no further part of it. She stepped into seclusion. Harvey would take on a new wife with Powergirl, someone who he had met while working with other heroes to save the world during the Infinite Crisis.

The SuperMan would continue working to further refine his control of the world. He started the "New Era Indoctrination Program" for those captured during "The Purge" to bring them back into society. During this time he works to find those that managed to evade his efforts of capture during the Purge, a group of resistance heroes, mostly Secret Six members who called themselves "The Outsiders".

A bizarre event occurred were visitors from New Earth came to visit. After capturing and reading the mind of one member of this world (Green Lantern) he learned that the world had numerous powerful villains and heroes. With this information, he believed that the other world was a threat, and with the help of power, rings attained from the visitors and the aid of his magical ally Orion traveled to New Earth to explore it.

Upon reaching the other world he found a world much like the one he had solved filled with governments teeming with corruption, misused resources, and many other atrocities he had fought to wipe out on his own world. It wasn't long he met someone also calling himself "Superman" who Harvey believed to be one of the caretakers of prolonging this state of ill-being. He quickly learned the other Superman, while similar in name was nowhere close to his match in power and was quickly repelled. With the aid of his allies Powergirl and Orion he zipped through the world bypassing defenses and capturing all the other world's leaders. With the acquisition of the world leaders, he worked to deliver a message of better world order, but as he expected, the new world resisted.

Harvey calculated that the overtaking of the new world's defenses would be only slightly more difficult than how it went on his own world. The equation was thrown off only a little bit by the arrival of "The Outsiders" from his own world that aided the native defenders. For a time he amassed an army of the native super villains to be his army. This was only to give him long enough to unleash his own greatest ally on the world, the Ultra-Humanite. With the E.M. pulse of the Ultra-Humanite's creation, the New Earth's energy and communication grids were brought down much like in his own world.

The combined forces of the New Earth's defenders and the Outsiders from his own world proved to be more than he, the Ultra-Humanite, and his army could handle. In the end, the arrival of his former wife, Lola declaring she would not let him destroy another world distracted and weakening Harvey long enough for the native defender Superman to quickly subduing Harvey. The Green Lantern from his own world locked Harvey, Powergirl, the Ultra-Humanite, and Orion in the gateway that the Ultra-Humanite had been locked in. Hauntingly, the last words of a man driven to extremes to solve the problems of two worlds right before being locked away were "I...I only wanted to help".

Superman and his city were taken by Futures End Brainiac and Telos, where he lost his powers for a year. After the dome came down, he encounters Pre-Crisis Barry Allen. After a brief fight, Harvey saw Barry's death. He realized if Barry died here, it would lead to the Anti-Monitor destroying New Earth. To prevent this, he threw the fight.
Superhero Class