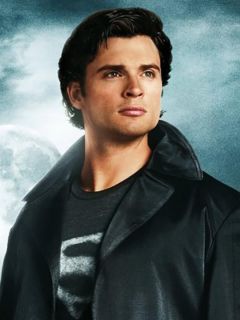 Clark Kent, aka Superman, is Earth's greatest hero and the main protagonist of Smallville. Hailing from the planet Krypton, Clark is a super-powered alien who was raised in Smallville, Kansas. He resided there until his early adult years, when he moved to Metropolis. Born as Kal-El to Jor-El and Lara-El, Clark was sent to Earth by his parents to fulfill a destiny in which he would become the savior of humanity: he was rocketed off of the planet just minutes before its destruction. Accompanied by a massive meteor shower, his spaceship crash-landed in Miller's Field in Smallville: there, he was found by farmers Jonathan Kent and Martha Kent to which they raised him as their son, instilling in him strong moral principles and teaching him to use his abilities for good. Thanks to the yellow sun, Clark developed many Kryptonian powers that grew stronger as he got older. He learned much about his origins from Dr. Virgil Swann, a journal and an artificial intelligence version of Jor-El. Clark secretly fought crime around his hometown during his high school years and moonlit as a vigilante throughout Metropolis initially known as the Good Samaritan, then as the Red-Blue Blur, and then simply as the Blur. By day, he works as a reporter at the daily planet