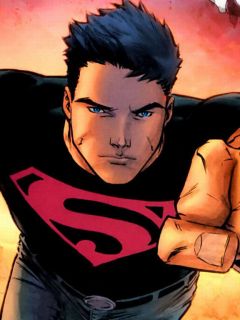 At first, Superboy's only superpower was "tactile telekinesis", a telekinetic force field that surrounds his body as a protective shield and allows him to simulate Superman-level speed, strength, flight and invulnerability. The tactile TK field also lets Superboy break free of an opponent's grip by pushing the field outward to force the opponent away. Other creative uses include rendering an opponent immobile by extending the TK field as long as they are both standing on the same ground.

Telekinetic Superhuman Strength - His full strength is undetermined at this time. He, like Superman seems to be able to lift almost anything he can conceive of. To date, he has lifted the world's largest yacht using his telekinetic strength (a feat of at least 500 tons); he has even been shown to throw a football at Mach 5. Objects lifted with his telekinetic strength do not crumble under their own weight or internal stresses. As his will power and concentration improve, so will his super strength increase. This does not truly count as super strength in the traditional sense, since Superboy has been bound with chains that were surrounded by an energy field and he was unable to escape because he could not directly affect the chains with his power.

Telekinetic Flight - Superboy is able to fly at high supersonic speeds using a reflexive action of his telekinesis, literally dragging himself through the sky. His concentration is required to maintain great speeds. His fastest recorded speed has been seen at Mach 3 from the pages of Young Justice, and his greatest distance flown unaided has been approximately 12,000 miles. However, as with his strength, his speed was also developing naturally, Superboy is capable of roughly reaching speeds of Mach 5 (1 mile per second) but the limit of his speed currently is unknown.

Telekinetic Force-Field - By creating a field around his body, he is able to resist or reduce injury from non-energy based attacks by causing the object to be deflected from his personal force field. Bullets and shrapnel are easily deflected. This field does not repel gases or energy based attacks as well, though his skill in deflecting energy attacks is improving.

Tactile Telekinetic Disassemble - By touching an object, Superboy may cause that object to literally fall to pieces. It can be assumed that he could conceivably put an object back together, if he understood how the object functioned in the first place. He can also manipulate aggregate solid masses such as volumes of sand or dust in the same way, causing the individual particles to fly apart in an explosive manner to create particle clouds or a forceful attack.

Telekinetic Field manipulation - after receiving training form Knockout, Superboy learned to project his force fields outward at will allowing him to engulf and surround people and objects with a force barrier. he could use this for supportive and defensive purposes like moving inanimate objects and living people around or throwing and pushing objects away from himself. he could also hold objects in his fields for a limited time, the fields strength relied on his own will and focus so long as he centered his mind on his task the field would remain intact.

Telekinetic Force Blasts - Superboy also learned that he could project burst of raw psionic energy bolts from Knockout as well. he mostly projects the energy from his hands but it is assumed that he could project them from anywhere since his Tactile TK field permeates from his entire body. The blasts he emits have concussive force equivalent to 5,000 pounds of TNT, but it is speculated that as he grows older this force amount could grow and change along with him.

Kryptonian Physiology: Superboy's cellular structure is more dense, resilient and biologically more effective than human tissue, now this includes even having superhuman strength without using any Tactile Telekinesis. Without exposure to solar energy after a certain period of time, his strength reduces to the level of a human of his height and weight who engages in regular physical activity. He does possess several organs whose functions are not yet disclosed or understood, but are believed to be part of and perhaps even the source of his biomatrix force field and reclamation aura. Superboy's body also stores energy actively within his bio-cellular matrix as an energy pattern that is linked to his body's electromagnetic field. This energy powers most of Superboy's electromagnetic capabilities such as flight and heat vision.